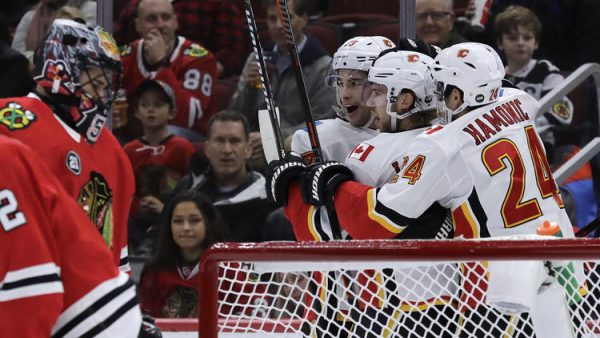 Tonight’s game was quite a throwback—to stupidity, dirty hits, pointless fights, everything you remember from the bad old days! This marks two games in a row where the Blackhawks have had a player thrown out, which tells you nearly all you need to know. Let’s get to it:

–The Hawks actually made it over 10 minutes without giving up a goal in the first period. This is where we’re at now, when going half of the first without falling behind is a major step. Putting aside the blackness of that reality, not only did they avoid giving up multiple goals early, they even answered the Flames’ first goal with a classic forehand-backhand by Jonathan Toews, which just de-pantsed Mike Smith. So the game didn’t get off to TOO terrible of a start, although it must be said that the Flames outshot the Hawks 18-6 in the first. Think about that for a minute. They gave up 18 shots in one period, which is bad enough, and that was a full three times the number of shots they themselves managed. What does this tell you? One, is that they barely clung to life in that period. Two, is that the only reason they did so was because Corey Crawford is unreal. He had multiple saves in the first that kept the game from getting out of hand early, including after Forsling had a bad giveaway, and also on the PK after Kunitz took Dumb Penalty #1 (more on that later). Crawford hasn’t exactly been lights out in his last few games, but none of the goals tonight can be pinned on him as bad or soft ones. He was definitely back to form.

–And man did we need him to be. The level of stupidity tonight was really something to behold. After getting out of the first tied at one and with a tenuous hold on things through 4-on-4 to start the second, Chris Kunitz went full-on Neanderthal and elbowed Travis Hamonic in what can only be described as a dickhead play. Hamonic’s head was down, but Kunitz went high with the elbow and he was getting rid of the puck so it was both foolish and dangerous. Kunitz fully deserved the major penalty and game misconduct. And of course, the Flames scored twice on the ensuing extended power play. Those goals made the difference in the game, and they were entirely because of Kunitz being a stupid asshole. If he isn’t stapled to a chair in the pressbox for the rest of the season that will prove once and for all that the Hawks’ brass is incompetent, doesn’t understand how to win, and doesn’t care to figure it out.

–In an attempt to not be outdone in the stupid asshole department, everyone’s favorite dung heap Brandon Manning got in the most useless and wimpy fight possible with Garnet Hathaway (which btw is NOT an actual name). The two skated around each other with fists brandished like old timey boxers, and hit each other far less than that. It didn’t “change the momentum” or “send a message.” In fact, the only upside was that Manning spent most of the rest of the game in the penalty box and thus unable to offend our eyes with his playing.

–Clearly I’m not one for fighting, but I will say this: in the second period when James Neal basically stomped on Corey Crawford and Crawford came after him and nearly punched him, I was cackling with delight. If Crow wants to hit someone because he’s frustrated with this shitty team and the defense allowing him to get curb-stomped, I’ll set aside my issues and I’ll be here for it.

–The power play…it’s just so bad. And on paper it really shouldn’t be: Toews, Kane, Saad, DeBrincat and Jokiharju…this should be a functional first power play unit! But they can’t make a zone entry to save their lives. Seriously. They cannot get out of their own zone, they cannot get through the neutral zone, and they most certainly can’t get across the offensive blue line. It’s like a god damn force field, and that stupid-ass drop pass in the defensive zone has lived on in the Colliton era like a recurring nightmare. There are too many issues to cover in these bullets, but suffice it to say that the clown shoes are still firmly entrenched.

–Alright, enough doom and gloom. What was good from this game? Toews’ goal was pretty and we need the top line to keep scoring. The Kahun-Kampf-Kane line may be something that works. Their 43 CF% didn’t bode all that well but they were certainly fast (and besides, the entire team was underwater in possession). Dylan Strome had a nice goal. And once again, for the cheap seats in the back, Crawford finished the night with a .927 SV% and an assist, and had to face 41 fucking shots on goal.

Tonight was ugly, dumb and frustrating. If the Hawks had gotten blown out it would have made sense and been deserved. The Flames are playing much better, but again this could have been a winnable game—Mike Smith is Mike Smith which means there’s always a chance, and the fact that it came down to the stupidest of penalties is downright painful. But, there’s no rest for the wicked with three more games this week. Fire Chris Kunitz into the sun. Onward and upward.