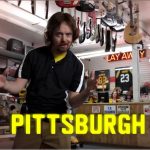 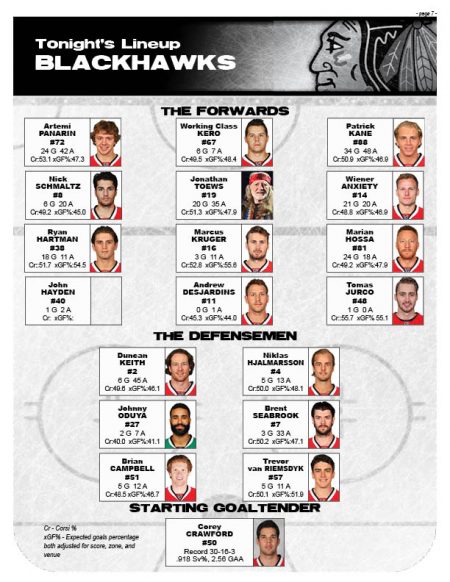 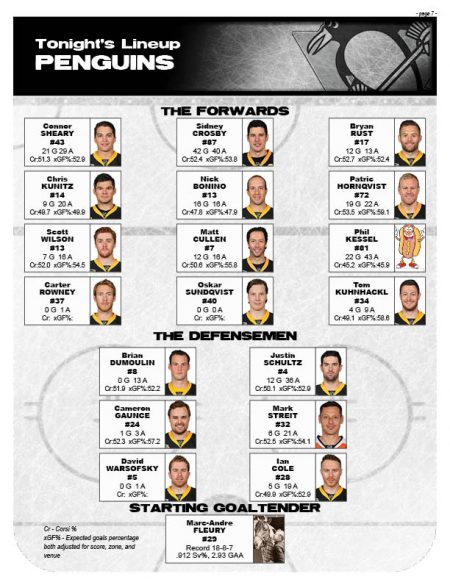 For the Penguins, they currently, somehow, sit third in the Metro with 103 points, two back of Columbus and five back of Washington with all three teams having played 75 games. Five points in 7 games with a team in between is a steep climb, but in an ideal world the Penguins would probably at least like to get home ice against Columbus, which makes the matchup at home this upcoming Tuesday critical. The Pens have Carolina, Jersey, the Leafs, and the Rangers twice as well after tonight, so it’s eminently doable for them. However coming into tonight they have lost 3 straight, two via shootout so they don’t really count, and a 6-2 peckerslapping at the hands of the out-of-it Cold Ones on Sunday. They’re still pouring in goals at a league-best rate of 3.6 per game, which seems logical considering their top two centers are both perennial Hart and Ross favorites. Sid is in the midst of an 8-goal, 7-assist month of March in 14 games, which believe it or not is actually quiet for him considering that 6 of those goals came in a three game-span against the Devils, Panthers, and of course the Sabres game where he castrated Ryan O’Reilly and scored arguably the greatest backhand goal ever seen. He’s most regularly flanked by Conor Sheary, who at least has been able to prove that least year’s Cup run is not a one-off and has been able to keep up with Sid, potting 21 goals of his own this year. And even if that line is still kept mostly in check, Geno is quietly having a fantastic year himself with 72 points in 62 games, but finds himself hurt again tonight. Then there’s PHIL, who will likely top 50 assists this year currenly sitting at 49, along with HBK Linemates from last year Nick Bonino and Carl Hagelin, neither of whom want for any speed. Shit, even Matt Cullen at 40 on the fourth line can still move pretty well even if it’s mostly through grizzled veteran know-how on being where he’s supposed to be positionally. It’s top to bottom arguably the most complete forward group in the NHL.

The blue line is where things have gotten a bit leaky for the Pens, and it’s the usual injury woes. Kris Letang, Olli Maata, and Trevor Daley still all remain out long-term, which is why the Pens went on a shopping spree at the deadline, and even then deadline acquisition Ron Hainsey is out with an upper body injury. That’s left Justin Schultz as a part of the Penguins top pairing with Brian Dumoulin, and though Schultz has had a great offensive year, that’s been done mostly slaying bums from the third pairing. Dumoulin is a solid centerfielder for him, but Schultz against real competition is what landed him in Pittsburgh from Edmonton in the first place. Mark Streit is currently disrespecting Dick Tarnstrom’s legacy as a Penguins deadline acquisition of an offensive defenseman by wearing 32, and he’s partnered with Cameron Gaunce, who is with his third organization in three years and has played 29 NHL games in that time. On the second pairing of a Cup contender. Ian Cole, who never met a chipped in puck he couldn’t over commit to, and David Warsofsky are the third pairing.

Things don’t get any less muddled in net for the Penguins, who held onto Marc-Andre Fleury at the deadline and will probably part with him this summer 14 years after drafting him #1 overall, giving Matt Murray every opportunity to grab the net all season long. Murray has been solid posting a .923 overall and a .931 at evens compared to Flower’s .912/.921 split, but he’s battled some injuries throughout the year, and appears to be hitting a bit of a wall under his first season with an NHL starter’s workload, with only a .910 overall this month. Meanwhile Flower has tossed a .944 this month in spot duty, and gets the call tonight.

As for the Men of Four Feathers, with the Wild losing to the Capitals in OT last night, and even then by the hair on their ass, it’s now a race to 109 to clinch the division and conference, as blowing a 3-goal lead to an energized Ning squad and their man-on-top-69 proponent of a head coach Jon Cooper. Ryan Hartman gets back into the lineup and out of the naughty chair, slotting in on Marcus Kruger’s left and opposite Marian Hossa, which is is a pretty versatile line to keep in mind further down the road this spring. That leaves Tanner Kero between the Style Boyz, which isn’t a long term solution to much of anything, but is somehow a thing out of necessity. On the back end the pairings remain unchanged and Corey Crawford regains his cage after Scott Darling on the road once again became Scott Darling: On The Road.

With the Pens blue line nearly entirely in Sick Bay along with Geno, past Sid’s line there are some matchups that can be exploited even without last change. But the fact that Sullivan has this team where it is despite a short summer and the injuries they’ve sustained should be proof enough that he didn’t fall completely ass backwards into a ring thanks to Sid, and will try to get him every look away from Keith, Hjalmarsson, and Toews that he can. And a lot of the time, only having Sid’s line firing is enough. The Penguins need this game more than the Hawks do despite having a spot locked up, because they’ll need all the help they can get in the form of home ice against Lumbus. Columbus has both a goalie and a power play that can steal a series, and the Penguins in the Sid/Geno era have always been a subtle red-ass team that will take a dumb penalty. So look for them to try to go mach 10 right from the start here to kill the Hawks’ interest and give Flower a lead to work with. For the Hawks, they should be able to keep up with the speed, but that all depends on the interest level. Another day off the calendar and a clean bill of health should be enough tonight, but another two points however they come puts their finger on the divisional and conference scale even more. Should be fun. Let’s go Hawks.