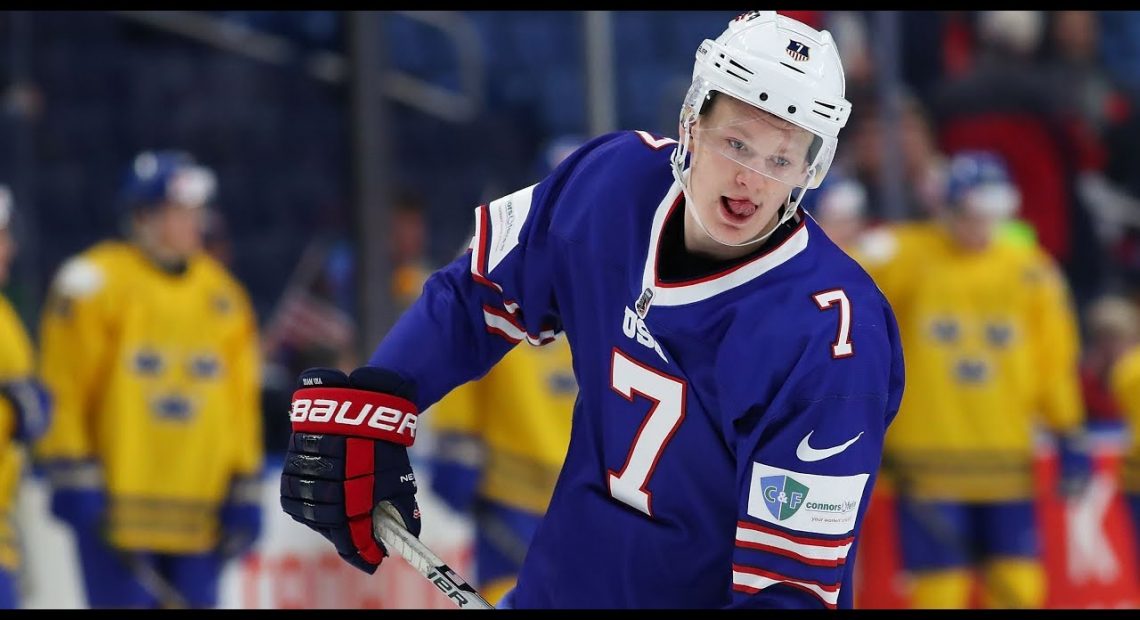 While it wouldn’t be our first choice, the Hawks are certainly making all the noise they can that they’re going to keep the #8 pick. And hey, they just might and Stan Bowman’s drafting record is not bad, and he hasn’t ever had a pick this high to play with. The highest pick Bowman has had since 2011 was #18, twice, and he took Mark McNeill (whoops!) and Teuvo Teravainen the next year (I hurt myself today…to see if I still feel…). Stan has only had two other first round picks, as some have been dispatched for deadline trades and the like, and those were Nick Schmaltz (good!) and Henri Jokiharju last year (probably good?).

So let’s start looking at some names the Hawks might take with that pick, if they do indeed keep it. There’s no player there that’s going to help this team next season, at least it’s very unlikely. And we’ll kick it off with Keith Tkachuk’s latest garbage son to enter the draft, Brady Tkachuk.

I don’t even know why we’d list other players this week, because if the Hawks keep the pick, and Tkachuk is there, they’re taking him. You know it, I know it, they know it. It’s so obvious it’s like the current humidity just sitting on your head. The Hawks have kind of been obsesses with the Tkachuk family for a while. Keith was the preferred return for Roenick once upon a time, after the Hawks half-heartedly tried to just sign him while Bill Wirtz was asleep. While Stan Bowman has seemingly tried to change the organization’s focus to speed and skill, this is still a front office that values “GRITHEARTSANDPAPERFAAAAAAARRRRT” and you know if “Tkachuk” is the last name, there’s plenty of that.

At first, Tkachuk’s numbers at BU don’t jump out. But we went straight to the man on the ground, one Ryan Lambert of Puck Daddy, who watches more Boston area college hockey than anyone who has any dreams of happiness in life would. And he sent this along, which are Tkachuk’s peripherals of the BU games Ryan attended, something like 15-18 of their 40.

Pretty dominant stuff. Tkachuk did play with other high draft picks, as one tends to do on Comm Ave in Boston, in Shane Bowers and Patrick Harper. Later, he was on a line with Jordan Greenway, who finished the year in the Olympics and then the Minnesota Wild. But according to Lambert, all of those players did worse without Tkachuk.

The eight goals only are a concern, but Tkachuk shot 6% all season and it’s unlikely that’s where he is as a player. Also, given his size a lot of his shots should come from in close.

Where Tkachuk has looked particularly tasty is in the past two World Juniors, and we know the Hawks love them some Yanks. He racked up 16 points in 14 games total, and drove the Canadians especially nuts this past tournament in the outdoor game.

Tkachuk isn’t just yap and size. He has exceptional hands and while he’s not a burner, he’s shiftier in traffic than his size would indicate. He’s a gifted playmaker as well, so he might be an oversized DeBrincat, though without the same marksmanship.

All of it signals that Tkachuk has a very good chance of being gone by the time the Hawks are on the clock, and even if I’m skeptical of what they like and would accentuate in Tkachuk’s game he would be a borderline-steal at #8. Tkachuk could probably contribute to an NHL team now, but the general thought is he’s going to play one more year at BU. He probably does need to get a little faster at least to be a real weapon at the top level, and that will be the focus for him next season.