Better Leave Her Behind With The Kids, They’re Alright 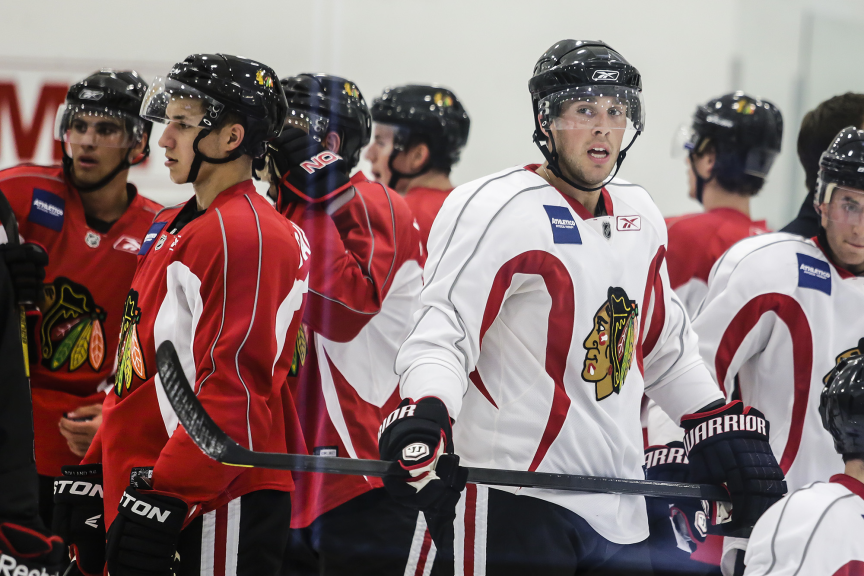 It’s always a weird mix at Prospects Camp. You have the made men of 1st round picks and this year they’ve added the spice of kids already in the organization. You have the mid-level picks who definitely have something to prove before they had back to whatever campus or Canadian backwater to work on their games. And you have the college free agents who very well may never wear a NHL logo on their chest again and are doing their best to make it count.

I don’t know how much you learn from any of it, especially with a team like the Hawks who have a pretty much set top roster and one in Rockford that will have a lot of returnees trying to move up the depth chart. But it can’t hurt to look. So I moseyed down there today to catch the scrimmage. Just some random observations:

-Player I thought jumped out the most, at least to me, was defenseman Nick Mattson (though every time I saw his name I couldn’t stop hearing those fucking “Max Madsen” ads). Mattson is heading into his senior year at North Dakota, and it clearly showed that he’s spent three years at a top-level college program whereas a lot of these guys are still freshmen or sophomores. His numbers in the NCAA aren’t all that staggering, but he showed natural instincts in the offensive zone and always seemed to find space and passing lanes. Real calm out there. He’s lefty but mostly played on the right side today.

-A player who showed high defensive instincts was Robin Norell, which isn’t surprising coming from someone who was on the Swedish junior team last year and played 20 games in a European professional league. He sure isn’t big, but he just seemed to glide right to where he needed to be to break up play and always made the simple pass to send the play up the ice. I don’t know what his future is at 5-10 without major wheels and skill, but the brain looks to be there. Step ahead of most of these kids.

-Chris Calnan was another who seemed to slow the game when he had the puck, though not surprising from a BC kid. With their entire top line gone (and probably headed for Calgary if Kevin Hayes gets his wish), look for Calnan to get promoted this season in Chestnut Hill and put up big numbers.

-Nick Schmaltz showed off some pretty silky skills scoring in the second half of the game, coming up with a toe-drag in the slot that took two d-men out of it and left him a clear wrister from about 20 feet. Knew where that was going.

-The Hawks brought in Oliver Mebus, who is 6-9. It was something to see, and he wasn’t a total plodder on skates. But probably the last we see of him.

-Teuvo took some shifts in the first half of the game, but not regular ones, looked head and shoulders too good for everyone, and then wasn’t around in the 2nd half. Not sure if he was hurt or everyone figured out this is a complete waste of his time.

-I guess I wish I noticed Vincent Hinostroza a little more, given his pedigree. But sometimes you just catch these guys on the wrong day, or they don’t have much at stake as he doesn’t because he’s headed back to South Bend either way and that’s where the real work lies.

-Fans who feel the need to yell stuff at the players during these things are people I’d rather not be around.

-Also, I think all the teenage girls who tweet at Brandon Bollig were there. I’m sure he was thrilled. 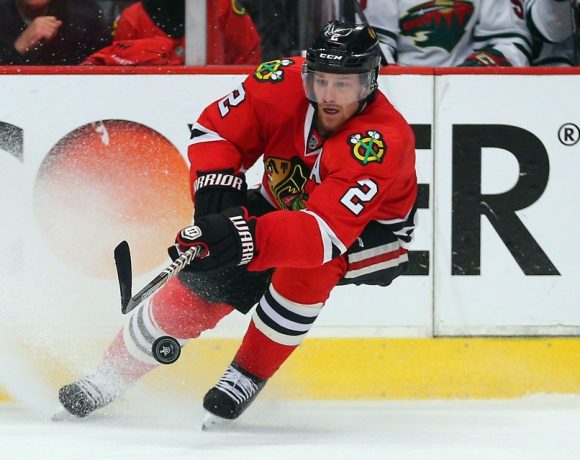 Always The Viktor, It's Never Your Fault