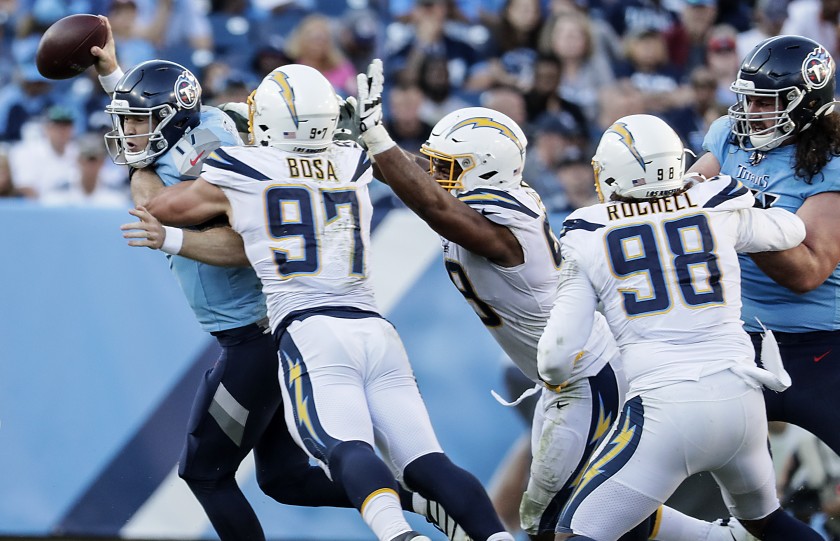 Hey it’s yr boi DJ Yung Milwaukee- Wes and I decided to collab again on a matchup post for Sunday’s weekly nightmare. One of the greatest things about football is it’s ability to take us away from the problems of the workweek or whatever. Watching the Bears in 2019 is still therapeutic, because no matter how bad things get for me at least I’m not on this team, I just write about them

*sobs to the tune of “Bear Down, Chicago Bears”*

Mornin, Wes! Let’s chop up these Bears/Chargers matchups, shall we? Since I’m a glutton for punishment, I’ll take the Bears offense vs the Chargers defense.

Looking at the NFL.com stats for the Bears offense this season is a new, special form of torture. It’s the kind of torture that you know will keep bringing you back for more, but I think hopefully for us the expectations have been completely removed so we can laugh. They say comedy is tragedy plus time, and I’d say it’s time we went full Joker.

Look, the Bears live in a society. A society where they have 420 rushing yards in six games. They have gotten 17 first downs this year via the run game, and 15 first downs via penalty. Mitch can’t run a simple RPO. Kids are getting booed at Hawks games for going as Trubisky for Halloween, as if that wasn’t the spookiest costume in Chicagoland right now.

Anthony Miller is officially a ghost, Taylor Gabriel exploded for a huge game and is now also a non-factor, and the Bears customary jet sweep motion is bringing extra men into the box to stop the run. They’re shooting themselves in the foot left and right. The line isn’t performing well, but how well can you expect a line to hold up when they’re constantly facing 2nd-and-8 or 3rd-and-10? Hopefully the Bears take advantage of the Chargers allowing for 3rd down conversions literally half the time (39 conversions in 78 tries).

The interior of the Chargers line (Justin Jones and Brandon Mebane) are both out, so hopefully the Bears take advantage of that and establish the run for once. That said, Joey Bosa is still a monster and I’d hope the Bears keep some extra blockers back there to chip and give Mitch extra time to survey the field before eventually taking a sack.

Basically I’m afraid that Ryan Tannehill is going to have a better game against this team than Mitch will, but if the Bears watch tape they’ll know that the best way to beat the Chargers is to run the ball. Darwin James has been out all season, which opens up the box for more running lanes. You would think the Bears have plenty of options this Sunday going against a middling defense missing both it’s defensive tackles and safeties, right? The Chargers hemorrhaged yards to Titans receivers last week, with Ryan Tannehill going 12/13 for 181 yards and 2 TDs when targeting the middle of the field last week. Naturally, I’m expecting Matt Nagy to do the opposite.

Well, I’m thoroughly depressed now. What ya got, Wes?
I wish I could tell you that I’ve got a pick me up…and I might?

The Chargers offense can boast the third highest average passing yards a game at 293 and change, but they’re only one spot ahead of the putrid Bear rushing attack at 74 yard/game. So while they’ve been able to move the ball through the air with some ease, they are just as atrocious running the ball and the passing yards are nice, but they’re a 11/6 TD/INT ratio through the air and fumbled five times, bringing the overall TD/TO ratio to 14/11. The Bears TD/TO ratio is 10/6.

This is NOT going to be a battle of competent offense/teams; things will be ugly.

Things aren’t getting any easier for the Chargers before they even leave for Chicago. Recently promoted G Forrest Lamp broke his ankle last weekend and will miss the rest of the season. It’s another hit to a line that’s already down Mike Pouncey and Russell Okung, though even with Okung reportedly be back this week you could expect some rust.
Melvin Gordon will continue trying to get up to speed after ending his hold out a few weeks ago, but neither he or Austin Ekeler have gotten much going at 2.3 and 3.6 yards/carry, respectively.

Ekeler is helping to prop up that passing game with 44 receptions for nearly 500 yards and four TDs, most on the team. He’s joined by Keenan Allen with 49/564/3, but after that it’s a steep drop to Mike Williams at just 23 catches. In fact, only TE Hunter Henry is in double digits for receptions on the season, and he’s gotten 14 of them the last two weeks. Philip Rivers has a game plan, and it’s to feed Allen, Ekeler and now Henry.

The Bears will need to get the pass rush back on track to create pressures and get Rivers forcing balls to those guys to early or into what should be some stiff coverage for his three favorite targets. Ekeler gets most of his on designed screens and check downs, so Roquan Smith will need to shake out of his funk to keep himself and his front-7 on task to stymie the few things the Chargers do well. The way that Allen makes more of his catches in the short to intermediate route tree, I’d like to see Prince Amukamara stick with Allen all over the field, but the next time we see the Bears employs such a tactic will be the first.

This really feels like the perfect “get back to basics” opponent for Matt Nagy and Chuck Pagano to hit the reset button. You already spoke to the offense having an opportunity to exploit a battered and ineffective defense. The Bears defense doesn’t really need a full reset, but they need an easier matchup in terms of the game as a whole, and if the offense can put even some semblance of sustained drives together, that alone will make the job a much simpler one for the defense. They’ve also got a strong potential for turnovers, which we know they thrive off of and use to build confidence.

This could game could lift a lot of spirits IF Nagy and Pagano and be simple, be basic and just play a clean game, because Anthony Lynn’s Chargers are more than capable of demolishing themselves if you give them slight trouble and can mitigate the big play here and there. Would be nice to see that from the other side in 2019.