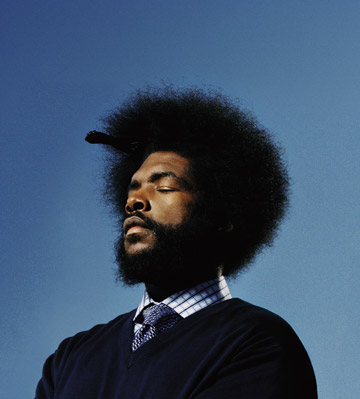 He was born Ahmir Khalib Thompson but is commonly known as Questlove… or perhaps ?uestlove. Either way, I guess. He comes from a strong musical family as both his mother and father were strong and active members of the Philadelphia soul and doo-wop scenes. Rather than paying for babysitters when they toured, they simply took Questlove on the road. Not a bad way to get your children interested in the arts.

By the age of seven, Questlove was already drumming in front of crowds. He studied at the Philadelphia High School for the Creative and Performing Arts (where classmates included Boyz  II Men, among others) and by the time he graduated he had formed a band called The Square Roots… more commonly known now as simply The Roots. Their 1999 album Things Fall Apart brought them initial fame and they haven’t looked back. Not content with just performing, Questlove has branched out into producingDJing, writing and even has his own shoe design with Nike… because… why not?

Of course, he also rocks a solid scraggly beard with an afro to match. And despite all he’s got going on.. he’s not afraid to throw down in a drum solo battles.