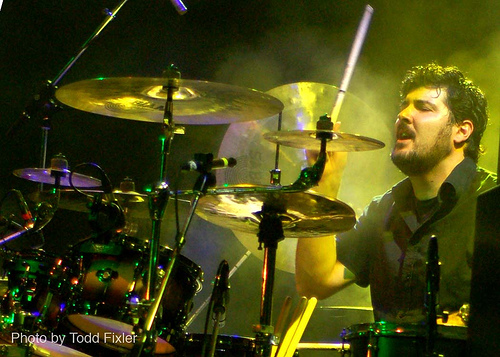 For twenty years now, George Rebelo has provided the precise yet powerful percussion backbone to one of modern punk rock’s most stalwart acts, Hot Water Music. And that balance of precision and power can just as equally be found in his jet black beard.

Hot Water Music has always toured relentlessly throughout the years, their with their live shows being truly energetic affairs. So when the band found itself on hiatus due to co-frontman Chuck Ragan’s desire to be with his family and sow his acoustic oats, Rebelo was enlisted to help out a fellow Gainseville, Florida act, none other than Against Me!. Rebelo contributed his skills to 2010’s White Crosses, and toured with the band intermittently. Hot Water Music themselves have since reformed, released new material for the first time in seven years in 2012 with Exister, and most recently pressed a limited edition quadruple-LP vinyl compilation to commemorate their 20th anniversary. And where ever the band may find itself next, it can be assured that the bearded Rebelo will be providing the drumming for it.

Tags: Beard of the Day Beards George Rebelo Gratuitous Use of Against Me! Hot Water Music It's Jameson it means that I'm not dead Trusty Chords