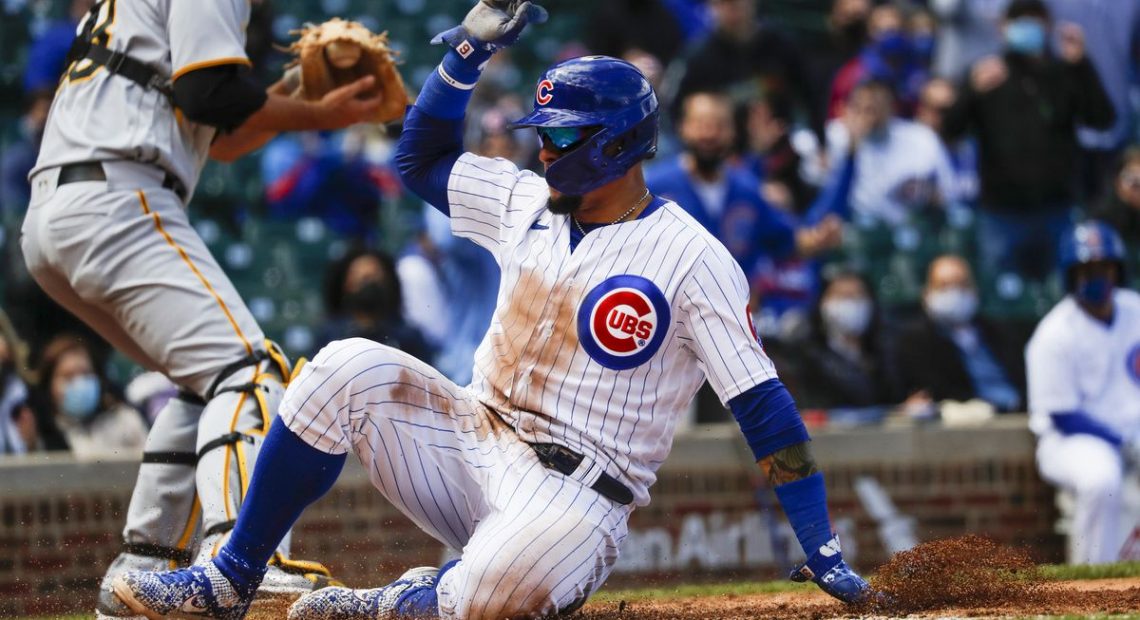 The notably-injured Cubs were able to win the season series against the notably-injured Pirates, and it was just a relief that the Cubs won this series considering the injuries effecting this team and the people playing in their place. Today the Cubs even tried to stage a mini-comeback to sweep the series, but Kyle Hendricks had just pitched them into a hole bigger than they could get out of. But considering all the mainstays of this lineup that are currently injured, we’ll take a two-out-of-three. Let’s break down each game.

Well, at least the Cubs seem to be back on their winning ways, starting this Pittsburgh series off on the right foot with a win. This win was quite a weird one, though, as every hit of the game was a single, except for 1 Pirates double in the 9th inning.

The good news I have to share regarding this game is that Zach Davies didn’t play horrifically. Yes, he had one strikeout, but he was able to keep all contact pitching on the ground, allowing all five of his hits to be singles and allowing 0 runs in his 7 innings of play. However, the bullpen nearly imploded in the 9th inning, as both Andrew Chafin and Ryan Tepera allowed one run each for the Pirates late in the game to make things interesting at 3-2. Rex Brothers was put in on a 2-out situation with a runner on base, and immediately gave up a single and a hit by pitch to load the bases up by the end. He was able to get out of it with a fly out to end the game, but still, good grief.

Everyone hit today as well, most notably Joc Pederson, who was garbage offensively to start the season before getting injured for two weeks. Pederson hadn’t had a hit since April 18, although he was on the IL for most of that time. Today, however, he got back on his offensive game, being a direct part of two of the Cubs’ three runs today. Pederson scored in the 1st on a fielding error and he singled to drive in David Bote in the 2nd.

Offense was created all over the lineup, as the Cubs had 9 hits this game, 2 RBIs and a walk. The only person who didn’t really contribute this game was Jason Heyward, who was left on base once. Defensively, however, the team was solid, getting pitchers out of jams when they needed to. The Cubs put up no fielding errors and made two double plays today.

The Cubs completed their season-high 5th-straight win in a very contact-heavy day, filled with fielding errors and not very many home runs. The Cubs’ first run happened on a bases-loaded Contreras hit by pitch (surprised?) in the 1st inning, but that small lead didn’t last forever. Ka’ai Tom was able to hit a 2-run homer to put the Pirates ahead in the ­4th inning.

Eric Sogard hit a sacrifice fly that tied the game, making up for his fielding woes, most notably in the 1st inning when he couldn’t keep the ball in his glove for a second base steal. In the 7th, a Matt Duffy hit to right field was able to score Jason Heyward, who had been on second base, at a play at the plate in which it was now the Pirates’ turn to drop the ball.

Ildemaro Vargas came in for Javier Baez halfway through the game, as Baez was feeling some back stiffness that the Cubs didn’t want him to play through. With so many of the usual suspects out, the utility guys had to step up again, as Sogard, Vargas and Marisnick were playing the field. Despite Sogard’s error early on, they all looked fine in the field, but batting-wise they were not helpful at all today save Sogard’s lone RBI.

Meanwhile, Trevor Williams had another 6-strikeout outing today, but he also allowed five hits, a home run, and two runs total. He played just four innings before the Cubs pulled him to see more of rookie Keegan Thompson, who played the next three innings. Although Thompson is good at keeping runs down, he still has yet to regularly strike out players, only having 2 strikeouts so far this year and none of them coming from this game.

Additionally, Andrew Chafin and Craig Kimbrel pitched the last two innings respectively, and both of them gave up a walk and no hits to win the game. Kimbrel gains his 6th save of the year and still touts an impressive 0.64 ERA.

This game went right off the rails early, and it was thanks to the 1st-inning pitching of Kyle Hendricks, to the surprise of absolutely nobody. After allowing two singles, a walk, an RBI groundout and another single, the Pirates quickly went up 3-0 on two outs. Hendricks allowed yet another single before an ugly throwing error by Ildemaro Vargas, who is still in at shortstop for Baez, made it 4-0 Pirates pretty quick.

Hendricks got three batters out on 7 pitches in the 2nd inning, but that throwing didn’t last very long. It continued to be ugly in the 3rd as Hendricks gave up a single and a triple back-to-back in order to make it 5-1, and a big-brained throwing error by everyone’s favorite fielder, Matt Duffy, made it 6-1. We spent the first half of this season so far complaining about the incompetence of our starting lineup, but then when a solid 37% of your starting fielders are out with an injury, you suddenly see yourself wishing for what once was, even when it’s not the best.

Speaking of starters, Jake Marisnick, who is STILL near-top on this team when it comes to batting average and OPS, went down on an injury in the 1st inning, which is why Matt Duffy even entered the game in the first place. The Cubs are pretty banged up now, and losing one of their top hitters, even if it’s a “utility player,” is certainly not helping things in any capacity.

At least Joc Pederson is still on his heater. He batted in the Cubs’ only run in the 2nd inning, and he also had a single in the 9th that scored Anthony Rizzo and started a Cubs mini rally. Vargas’s double in the 9th will erase in my mind — at least for now — his bad fielding play earlier in the game as he RBIed Bryant and Pederson to make it 6-5 Cubs. However, it was Javier Baez who was chosen to pinch hit in this two-out situation, and he grounded out to end the game.

The Cubs next face Cleveland for a two-game series midweek. They are second in the AL Central, behind the Sox from across town, at an 18-14 record. Cleveland just finished up their series against the other Ohio team, the Cincinnati Reds, in which they went from allowing a no-hitter against Wade Miley to crushing the entire Reds team offensively 9-2. (Their third matchup got rained out.) Hopefully a days’ rest is what some of these Cubs need so we can see some regulars back in the lineup sooner rather than later, as it will probably be the key to beating Cleveland this week. See you all then.