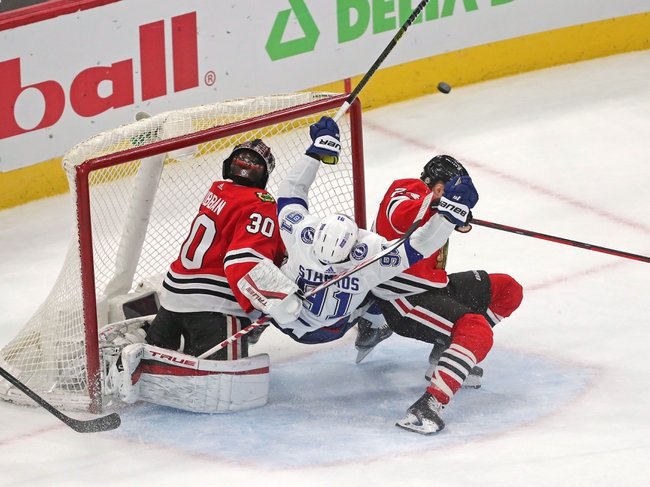 In a series that featured a little bit of everything, the Hawks showed in a nutshell what is going to be positive about their future and simultaneously what needs to be fixed before they can take that big next step into true contention. Game 1 and 3 saw the Hawks bust out solid leads with good play in the offensive zone and what continues to be a Death Star of a powerplay, but the D ended up letting them down and the Bolts came back to win both games. Game 2 saw the Hawks weather Tampa’s furious attack through 3 straight periods, only to counter punch and bury their chances whenever the Bolts slipped up.

We also saw what happens when a younger, more inexperienced team loses focus and begins to take sloppy penalties against a defending Stanley Cup champion. Much like the end of AEW Revolution last night, you saw how much positive feeling and goodwill about a product can disappear like a fart in the wind (or a botched explosion) when things just don’t go according to the plan. Ultimately, however, there was more to like than dislike about this series against a team that (on paper) should’ve kicked the Hawks collective asses to the curb.

-First, let us begin with the positives. The Hawks power play continues to be a doomsday device when they can set up shop in the opponent’s zone. Alex DeBrincat is rapidly ascending to Ovechkin and Stamkos levels of deadly in the circles with his shot. The season has gone on long enough for other teams to have this scouted by now, and it hasn’t mattered one bit. Even strength has been no different for Top Cat, as he’s now second on the team only to Kane in points.

-Speaking of, Patrick Kane is having a Hart Trophy kinda year, and if he can keep up this pace and the Hawks make the playoffs I think you’d have a hard time not giving it to him. It’s obviously the old “best player on the best team vs. the player most responsible for his team’s success” argument (which will never end), but Kane seems to have taken the mantle of “veteran offensive leader” pretty seriously in the wake of Toews not being around and should be number 1 on everyone’s ballot.

-Malcom Subban, despite giving up 3 goals (none of which he had much of a prayer on) rebounded nicely from the egg he laid against Detroit. Not only did he make some fabulous saves against the Bolts in OT during the furious up and down 90 seconds where everyone pretty much pretended defense was optional, but he shut the door on Stamkos in the Home Run Derby to secure the shootout win. Good for Malcom, as I’ve been a fan of his for awhile. He’s never going to be a starter, but he’s a more than serviceable backup if his minutes are monitored.

-Speaking of goaltending, Kevin Lankinen didn’t get much help from his defense in game 3, and if he wasn’t able to put forth the performance he did the Bolts could’ve easily put up double digits on the Hawks. His performance in game 1 was excellent as well, and if this is who he really is the Hawks Euro Scouting Department deserves some kudos from Stan and Danny (henceforth known collectively as Stanny).

-I fully expected the Hawks to get slaughtered in the possession metrics this series, the Lightning being what they are. However I was happily surprised that they actually won the CORSI battle in game 1, 58.7% to 41.3%. Game 2 was a different story, which should not be a surprise considering the furious attack of the Bolts in the first two periods (Tampa won the CORSI battle in period 2 78.3-21.7%. YIKES), but the Hawks were well on their way to winning the possession battle in game 3 when the conga line to the box began in the 2nd. There’s been some improvement here, and Brandon Hagel has something to do with that, as his constant pressure on the forecheck forces teams to try errant passes that more often than not are picked off in the neutral zone. If only the Hawks had some more speed to compliment him, they could be on their way to tilting the table.

-Mattias Janmark has been a solid signing by Stan Bowman this season, and him chipping in on Sunday with a (very nice) goal and an assist was an added bonus. In reality, he’s probably a 3rd line center on a team with legitimate Stanley Cup aspirations, and he should be treated as such when the trade deadline appears. The Hawks can find better uses for that money in the off-season, and any picks they can get for him will be of use either as currency in the future or as a chance to fill some holes on the back end.

-Now, the negatives. Connor Murphy almost certainly will find himself in the pressbox for a game after taking a run at Erik Cernak with about 10 to go in the 2nd period. (UPDATE: Murphy will actually not face any disciplinary action at all. Color me shocked) He was assessed the Hawks first 5 minute match penalty since Duncan Keith went full Brock Lesnar and pile drove Dillon Dube into the boards against the Flames in 2018. Murphy doesn’t have a history of Tom Wilson-esque behavior, so he’s got no priors. The shot caught Cernak up high and he ended up leaving the game, so expect discipline from above. The Hawks managed to kill off the penalty, thanks to a lazy tripping call on Victor Hedman (who had been playing full tilt the entire series for some reason) but were completely unable to capitalize on that momentum because…

-They took a million fucking stick penalties in game 3, and the Lightning absolutely made them pay. The Bolts went 4 for 5 on the man advantage, completely obliterating the 3 goal lead the Hawks had built up for themselves with what might have been their best period all year in the 1st. This is what you’re gonna get with a young team that also contains Nikita Zadorov, but Duncan Keith and Soderberg should know better.

-Ian Mitchell might need to take a sick day after getting absolutely roasted by pretty much everyone in a white sweater on Sunday. He only ended up with 10 minutes of ice time in a game that featured the Hawks losing a D-man halfway through to a major penalty. His CORSI for on the day was a cool 22.22%, and his only contribution other than being out of position all day was being on ice for both Tampa even strength goals and taking a boneheaded hooking penalty against Stamkos that lead directly to Victor Hedman’s game tying PP goal. Mitchell has a ton of talent and he’s got a bright future, but the last few games he’s been under water and probably needs a breather before he gets in too deep.

-Next up the Hawks travel down to the COVID Wild West in Dallas for 2 very important games against the Stars. Considering the Preds are dying a death, Columbus couldn’t give any less shits, and Detroit is still a Ferris Wheel filled with rotting corpses the Stars are pretty much the only team that could conceivably steal the #4 seed from the Hawks. Bare minimum this needs to be a split, so let’s see how the team responds to the skulling the Bolts gave them yesterday.