Once More Unto The Breach – The Committed Indian’s Season Preview: Teuvo, Richards, Mashuguna and More 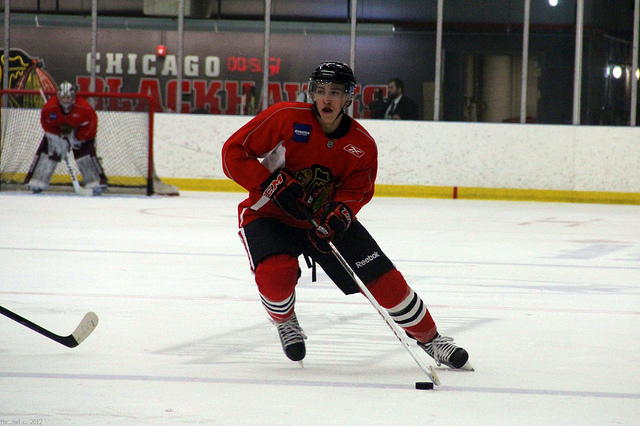 Time to start, and because he’s earned the right we’re going to kick this off with the very bearded and very Irish MightyMikeD’s queries:

When do we see Teuvo?

That would depend on who you talk to. Most seem to think he’ll start the year in Rockford, in which case it’s likely he would be up no later than the Holidays, depending on the rest of the lineup shakes out and injuries and other various factors.

Me? I think he starts the season with the Hawks.

There’s a couple reasons for this. One, we know that Q loves to bring some kid along to start the year to get at least a look, if not to prove that he knows better. Last year it was Nordstrom. It was Brandon Saad three years ago when he clearly wasn’t ready, and eventually got sent back to Saginaw. Nick Leddy the year before that. There’s probably a couple other names I’m missing. We already know that Q has taken a shine to Teuvo, due to being somewhat aware in his own zone already and using his quick hands to be more effective defensively than you might think.

Second, we also know that Q loves to shit on StanBo’s free agent signings, so bringing up Teuvo to play on the 2nd line and punting Richards down lower in the lineup would be a great way to do that.

But in all seriousness, I think the kid is too good for the AHL. The only question is does he have an NHL-ready body, and while he’s worked out here in Chicago all summer, he may not be there yet. But the hockey-sense, the hands, the vision, these things are all at an NHL-level now. I really think he’s going to light up camp just enough to start the year here. He may go back down eventually for seasoning, but I don’t see it.

Of course, that creates an even bigger logjam among the forwards, which has yet to straighten out as it is. Teuvo and Kane would be an odd combination, but that would force Kane to play with Toews which we know he’s loathe to do in the regular season. Teuvo could make for a third scoring line if Quenneville wants to once again employ his “3+1” model, perhaps between Bickell and Morin or Bickell and Shaw or Bickell and Smith or whatever else. That would depend on who gets moved to get under the cap of course (hi Kris!).

Teuvo also has the flexibility to play wing, and maybe the Hawks would like to see him apprentice there while he builds up the strength to play in the middle down the road. But he’d be another left-handed right-wing, and as you may know the Hawks are kinda stocked with those on the top six. But it’s that flexibility that makes me believe he’s got a real good chance to stick from camp on. Couldn’t really be more excited about it either. I mean, Hossa and Teuvo on the 2nd PP unit is something I want to see RIGHT NOW.

Is Brad Richards going to be fast enough to keep up with Kane?

No. Kane told ESPN’s Craig Custance yesterday that he’s going to start camp with Richards, as it’s apparently against the law to have him skate with Toews until the playoffs. I’m not as high on Richards as some, but he’s certainly an improvement on what’s been there before. Still, in the Western Conference it’s not like all the #2 centers are bums. Off the top of my head, Richards could line up across from Couture, Carter, Kesler, Backes, Granlund, MacKinnon, Spezza.

Which is why you would imagine Q would try and get that line the hammock shifts, with Toews and Kruger taking the tougher assignments to give Richards and Kane looks at 3rd and 4th lines. But if Teuvo does stick, wouldn’t he get those shifts?

Richards has seen his points-total and points-per-game drop every year, and that was in the East. Can he at least be in the zip code when Kane and Saad are tearing a hole in time? Probably. And with the right zone starts and competition he should be fine. But I wouldn’t expect more than fine, or for Teuvo not to replace him on the top six by March.

Is Q REALLY going to foist MANSHITTER on us?

Just for now. let’s pretend not. Even though we know the truth.