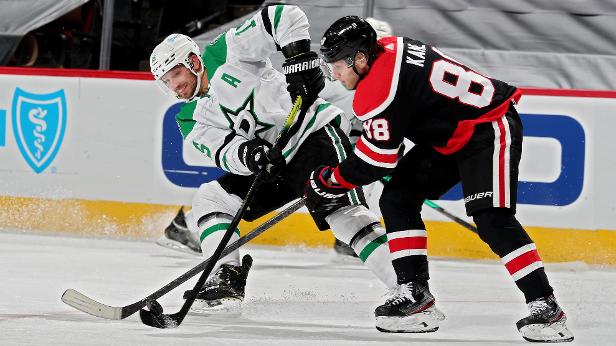 The Hawks certainly showed them last night. It always astounds me how this team can always be counted on to do the exact bare minimum necessary to kind of stay in the playoff race. Now things are a bit more difficult for them as their loss last night put the Hawks at a .500 record, 4 points behind 4th-place Nashville, who can’t stop winning, and only 3 points ahead of Dallas, with Dallas having three games in hand.

I’ve had about enough and I honestly don’t have a lot of hope left for the playoffs. We keep seeing the same issues over and over not being addressed. Here they are, some of them for the umpteenth time, in bullet form, with some good things mixed in there too.

Since the last writing, the Hawks traded away two Lucases – Lucas Carlsson and Lucas Wallmark – to the Panthers for Brett Connolly, Riley Stillman, Henrik Borgstrom and a 7th-round pick, cementing the Blackhawks as the team to offload all your cap issues to because we have the space.

Connolly only has 4 points on the season but had 33 points last season and a career-high 46 points the season before. He also won the Stanley Cup with the Capitals. Riley Stillman is not a points-getting defenseman, but Bowman says he is AGGRESSIVE and COMPETITIVE, so take that with whatever grain of salt you’d please. This is the last year of his contract so he may become a free agent after this season. Borgstrom is still more of a prospect, but he did play 50 games with the Panthers in the 2018-19 season and had 18 points. This year he was playing in Finland and has 19 points so far.

The Blackhawks start a 5-game road trip this weekend against Columbus, who just hilariously split a series with the Lightning this week. The Blue Jackets are now tied points-wise with the Stars, so the Blackhawks (once again) need TWO – not ONE – TWO huge wins here to put distance between them and other playoff contenders in the Central, I guess.