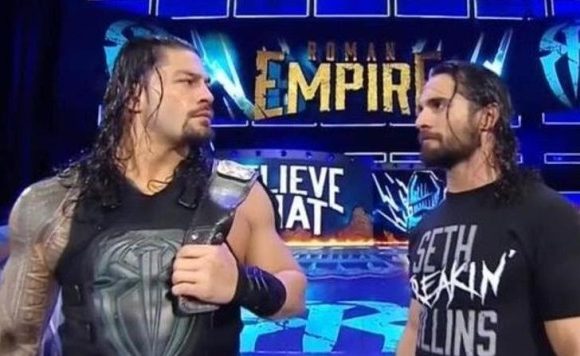 Friday Foofaraw – A SummerSlam Thinkpiece: The Ballad Of Seth And Roman

As most you know, on Fridays during the summer I basically go freeform to keep myself, and hopefully at least some of you, entertained. As you surely know now, I’m a wrestling dork and have taken a few with me. I will be in Brooklyn this weekend for both the NXT and WWE shows, and figured it was time to try my had at writing about it for the first time. Most of you won’t care, and that’s cool. But those who do I hope you like it.

At the top, I think it’s important to cite Joe Soriano’s wonderful “Roman Reigns Isn’t Relatable Because He’s Never Emotionally Vulnerable” piece from DailyDDT.com as inspiration for this. But it got me to thinking about how someone from the same starting point as Roman, one Seth Rollins from The Shield, could accomplish so much more in the hearts and minds of fans than Roman has. And when you have the emotional shortcomings and successes so beautifully illustrated, it becomes so much clearer.

As stated, Roman and Seth started from the same place on the main roster, as two-thirds of the all-conquering with a win-an-election-anywhere-including-Antartica popularity, The Shield. And in The Shield, Roman’s limited, swaggering ass-kicker of the gods act works because it’s only telling a part of the story, and Seth and Dean Ambrose could fill in the rest. Roman barely had to talk (clearly when he’s best), only had to wrestle half the time he does now (if that) and was only responsible for a portion of the story. Namely when he’d get a hot tag and end everyone’s world.

Seth’s separation/heel-turn from The Shield already begins to tell a more layered story than they’ve ever had Roman tell. There is a vulnerability of course in every heel, something they have to shroud in being a chicken-shit cheater or menacing ass-beater coloring outside the lines or one soaking up every advantage provided by the powers that be. They have to take it to excess to hide a weakness. Seth’s desire to be at the top of the card and his feeling he couldn’t get there with his friends lead him to the ultimate betrayal and aligning with the powers that could get him where he thought he couldn’t get on his own. It was a selling out of his values, which is a shortcoming/vulnerability in itself. Underlying the act is a show of weakness, if only of character or morals.

Seth of course did get to the top of the card, always playing the heel and even sounding at times like he was convincing himself. That all came crashing down mere months after becoming so, with a devastating knee injury forcing him to give up the title he had basically sacrificed all that he had previously believed in before. Related, at that moment Roman was offered the same choice by one HHH you’ll recall, at the head of a tournament to provide a new champ. Roman declined it, giving us more of the tired “I’ve never taken a shortcut” story that fans were already turning from. As Soriano said, it’s just more of the uber-confident robot who never has to question himself. It’s an action-figure.

Seth would return to take that title from Roman in the summer, though he would immediately lose it to a cashing-in Ambrose. Seth’s uncertainty of what he could be after his injury, which was accented when HHH showed the same uncertainty over what Seth could be due to it. Which is why HHH handed the universal title to Kevin Owens, and sent Seth on a course to prove to himself and his boss that he could still do what he used to and be what he was, even as he had to negotiate another injury before their match at Wrestlemania 33. Seth actually had to overcome demons and doubts, whereas Roman has never even paid lip-service to it. Even defeats on the biggest stage seem to only steel his resolve, and that thing was adamantium before.

Since then, Seth began on the trail of turning back into a face, and doing so by having to convince his former “brothers” that he was sorry and wrong for turning on them. There was supposed to be a full-out reunion, though that got derailed by Roman getting the Mumps (and really, Roman catching the Mumps and being replaced by Kurt Angle is straight up Mets-ian). From then on Seth launched his IC chase and reign, and saw it end when he believed too much in himself with an open challenge and lost to Dolph Ziggler. All of it has basically landed Seth as the most over wrestler on the roster, and his matches are about the only thing keeping you from setting yourself on fire merely to feel again on Raw.

We’ve watched Seth swing wildly from tunnel-visioned sociopath, to a broken athlete, to one righting the wrongs of his past, to reveling in the newfound confidence. But you only get there through a journey, one that sees you question yourself and make mistakes and have to make amends for them. It’s a confidence and swagger built on the rubble of what didn’t work and the lessons learned.

Granted, on the ground, Seth has advantages over Roman. The big one is he’s simply a better in-ring worker and more varied. That’s not to say Roman is a bad worker, and far from it, he’s just not the greatly dynamic Rollins (and few are). He needs help from an opponent, and not the broken-controller work of Wreck-It Ralph that Brock Lesnar provides these days.

However, It’s not that Roman has always been a blank slate. There were two times when they had him over, and then went back on it to preserve the script that only exists between Vince McMahon’s ears. The first was after that tournament post-Rollins injury, which Roman won and then saw Sheamus instantly cash-in on him. Roman then simply boiled over, not only destroying Sheamus but also HHH. I suppose it’s arguable that the vulnerability in not being able to control yourself and letting circumstances finally get to you helped him connect. The next night, Roman won the title back while beating up Vince, and you may think I’m crazy but the Philadelphia crowd, PHILADELPHIA, cheered him. Becoming unhinged at your bosses is something we can all agree on, I guess. At least he was leaving the “always the right way, no shortcuts” character back to get what was taken.

Of course, Vince borked this by trying to turn him into Daniel Bryan again AFTER he won the title and making him defend it in odd circumstances and eventually against every Royal Rumble opponent.

The second time they had Roman over was after he retired the Undertaker and the only time they almost leaned into him being a heel. His best ever promo is still the five-word one the night after that Mania after wading through a full 10 minutes of the most vitriolic booing and chants anyone short of a despot would get. “This is my yard now.” Roman even wrestled more heel in the aftermath, and some of that work was the best in his career.

Because it was bravado we could believe. It wasn’t just based on scripts and meetings we couldn’t see backstage and matches he was given. He ended the career of perhaps the best ever (a greatly diminished best ever, but that doesn’t lower his stature). It was built on something. But WWE spurned that momentum too.

It’s amazing how you can start in the same place as someone and yet end up so different.