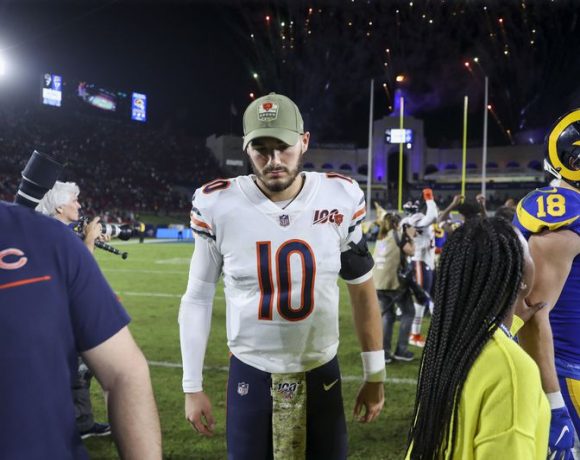 I popped into the local last night to watch the rest of the Chiefs and Chargers. Neither is having a particularly standout season, and the Chiefs didn’t play all that well last night. But as the game wore on and they started to find their rhythm, and the ads and promos for what was to come in the next week or playoff chases to be sorted out, I had that thought that goes through every fan of a bad team’s head, “My team doesn’t even play the same sport as this.”

That’s probably the worst part, for me, about this disaster of a Bears season (which is strange, because we definitely have seen Bears teams much worse than this, and more than a smattering of them. Just given the expectations…). No sport like football makes you feel you support a second tier or irrelevant team. The other sports have so many games that pretty much every game gets shuffled into the background at some point. There are no important February games in the NHL and NBA. But in the NFL, there’s at least one every week.

There’s a clear split between “The Show” and “The Scenery.” When you’re in the first group, your games have the bigger fonts on the promos for next week’s slate. They’re at 3:25 or flexed. You get the video or graphic during the week. People randomly talk about your game who don’t even live here. There are ads for your team during regular TV programming. You’re the first one mentioned as Red Zone is warming up. Pretty much everything around is getting you ready to watch your team. By the tine it actually kicks off you’re about ready to put your head through a goddamn wall. You’re the show. Your team is important and matters. The week has led to this.

But when you’re this, and the Bears have been this far too often considering they’re the CHICAGO GODDAMN BEARS, you’re filler. You’re the game RedZone cuts to because it has to, generally with a joke or a jibe from the host. “The Bears are actually in the red zone!” You’re the smaller font. You get the shitty broadcast team who have to pretend to be happy to be there (not that I need more Tony Romo in my life). When your national TV appearances approach, everyone inside and out acts with a sense of dread or contrition for subjecting the masses to your team. You’re not even an appetizer., You’re basically the other people in the restaurant to give it ambience, to seem full. It’s the sporting fan version of, “I got a rock.”

And it spreads to watching those games in “The Show.” It doesn’t look the same. Why can’t our guys get that open? Why don’t they make that play? They’re running something consistently. The distance between the bad team you support and the good ones you merely watch in the NFL seems infinite at times, more so than anywhere else I think. It’s hard to even conceive how your team will ever get there. You watch the Chiefs or Packers slice through a defense on a drive where every play gains no less than eight yards, and then you turn to the Bears and see Mitch back up and desperately heave something out to the flat that gains -1 yards and you’re sure there is no path between the two.

Sure, the NBA had the Warriors there for a bit or players like Michael Jordan and LeBron that you can’t conceive of ever having on your team (strange that Bulls fans will feel that way now). But it’s not the same.

It’s more painful now, because the Bears were in “The Show” last season. For the first time in years, maybe since 2010, we got to feel that everything else was building to our game, our team. We were what the networks and coverage pivoted around. We had the big font. We were supposed to again.

And when you’re a bad football team, the only conversation around you is who will get fired and who will be moved on. Everything in the past is just relegated to steps to a mistake. It’s almost as if last year didn’t happen to the football world. An anomaly. A blip. A ghost in the machine. And we’re starting over.

We have the small font. We’re just filler. And it feels like it was ever thus.