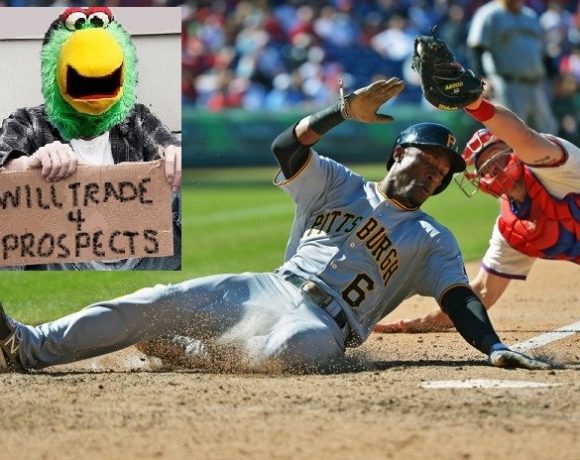 Yesterday we went over the putrid recent history of what the Sox have tried to trot out at RF. I’ve save another 300 or so words and remind you that it’s a BIG NEED.

Nicholas Castellanos has been discussed, and there’s no doubt they’ll be linked with Marcell Ozuna, Kole Calhoun, etc, etc in free agency. But Rick Hahn hasn’t been shy in the past to add to his roster via trade when the opportunities on the free market aren’t to his liking (which is seemingly always since 2015). Could Hahn and KW go to an old trading partner to fill the gaping void in their outfield?

Enter the spiralling Pittsburgh Pirates and Starling Marte. The Buccos had a dreadful second half in 2019 to finish dead last in the NL Central at 69-93, claimed to be keeping manager Clint  Hurdle only to fire him a day after the season, then bounced long time GM Neil Huntington (seemingly out of nowhere) while he was conducting the search for the new manager.

Sure sounds like another rebuild coming in the Steel City, and whoa, hey, they happen to have an affordable OF vet still in his prime (kinda) that makes below market value. Make the call, Rick.

Why Him? Starling Marte is about as steady and rounded as they come, a 31 year old OF with at least 3.0 WAR in six of seven seasons he’s played dating back to 2013. Marte is in the 20/20 club for HR/SB the last two years, and has over 20 steals in seven straight seasons, going over 30 all but twice. So he’s got pop, he can run, and while he doesn’t take many walks he also only strikes out in about 18% of PAs and hasn’t been under .312 BABIP in the last three seasons. Marte could slot in pretty much anywhere in the top half of the Sox lineup and greatly improve this team.

Best of all? unlike his freely available counterparts on the open market, he’s a savvy fielder. Marte has won multiple gold gloves and while he’s had a bit of a decline in the field in 2019 in Center, he’d be able to move over to RF while Engel handles CF until Luis Robert debuts in May. If they wanted/needed him to cover CF he’s also got that versatility. No matter how you look at it, Marte improves the defense.

His contract is another plus, as he’s going to earn an affordable $11.5M this season, with another team option at $12.5M next year ($1M buyout). Castellanos and Ozuna are likely to get something for 4-5 years and around $14M-$18M per year. Marte represents a more valuable commitment, 2 years at $24M and the opportunity to qualify him an offer after that for an arguably similar/better player.

You know Jerry loves him a smaller number, every time.

Why Not Him? That one year he didn’t reach 3.0 WAR was because he was suspended for 80 games for PEDs. He claimed it was an accident, of course, but there remains the threat that he could get that second strike and be banned for a full 162 next time. Probably not too concerning, but it’s there.

2019 also saw Marte’s worst defensive season, by far. He went from 5.2 dWAR in 2018 to -5.7 dWAR in 2019, which on the surface looks pretty damn concerning. He’s clearly still got the speed, though, and based on the the JUMP stat (this is a real thing, I promise) that tracks how well OFs read and react to fly balls he was ranked ninth best in the league. Marte has a strong case for positive regression in 2020 in the field, and I’m willing to chalk this up to the Pirates being weird and playing their OF real shallow because they’re idiots. Fight me. At worst he likely needs to be moved off CF and to a corner, which the Sox can accommodate.

There really isn’t issue on the offensive side, but if we’re picking nits his low walk rate would mean that any kind of decline with the bat would be a sharp one. There isn’t any indicator that will happen, but stranger things and all that. You also might appreciate more than ~20 HR from your RF. He’s right handed, so this doesn’t check off the LH impact bat, but if they fucking sign Grandal already everyone can worry less about handedness.

How Much Is This Free Resort Weekend? Herein lies the biggest problem with the idea of Marte – the Pirates don’t need to deal him, and the latest word is they aren’t looking to. Huntington no longer being in charge is also a bummer, as he’s probably out of a job for all the horrific trades he’s been on the wrong side of lately (Ivan Nova notwithstanding).

Still, there is history between these clubs and any remaining scouts are likely familiar with what the Sox have to peddle. Say Reynaldo Lopez straight up, or if that’s too rich for you maybe a package of Blake Rutherford and Dane Dunning. This shouldn’t cost any of the top youths, and if they ask for Jonathan Stiever I’m helping to pack his bags. The Sox won’t be the only interested party, so they can’t really afford to posture on middle tier prospects if the Pirates get serious about making a deal.

In an offseason with little to get excited about for free agent OFs, Marte represents the Sox best option available – if he actually is, you know, available.