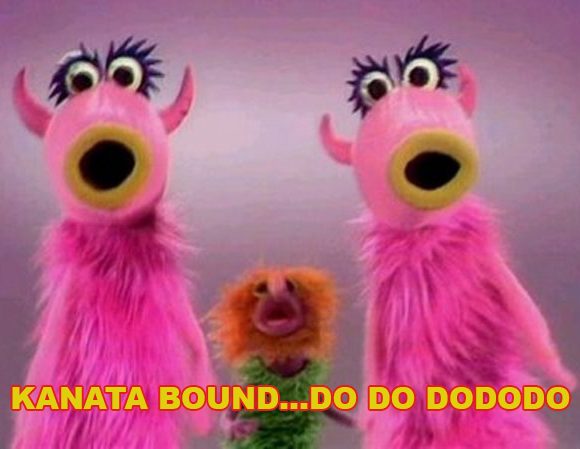 The Hawks get to remain in the remedial class after their win against the Ducks tonight, and arguably tomorrow, as they’ll head for the Eastern Canada swing. They kick it off tonight against the equally-rebuilding-as-the-Ducks Senators, before decamping east into La Belle Province to face another floundering O6 team in Montreal on Wednesday. But first things first, a contest out in the middle of nowhere Ontario. Even though basically Ontario is nowhere, and deep down even Ontario knows that.

The Senators aren’t quite as bad as they were supposed to be. This was supposed to be a Wings-like outfit, with a sad little point total as they raced to the #1 pick in June. And the Senators certainly aren’t good, but they haven’t redefined stink as we know it like the Motor City cadre. Still, they’re tied for the second-fewest regulation wins in the league with the just-conquered Ducks and two ahead of the Wings. Perhaps they just couldn’t anticipate just how bad the Wings would be. Who could?

Not that the Sens do anything well. They’re bottom-five in both goals-for and goals-against in the league. Their metrics aren’t much better, though they’re a little weird. They give up a ton of attempts, and have one of the worst Corsi-shares around. But their expected-goals marks are basically middle fo the pack, in that they don’t give up a ton of great chances. They’re not a great defensive team by any sense of the word, and they don’t have nearly enough firepower to make any team capable of breathing sweat. But they do limit the kinds of things they give up, which is more than you can say for the Hawks. In fact, if they were getting any kind of goaltending, they might barely be on the fringes of they playoff picture.

But the thing is, Craig Anderson is now three days older than water and Anders Nilsson is the very definition of “replacement level goalie.” So this is what you get.

The Sens have gotten breakout seasons from Anthony Duclair (spotlighted earlier) and Jean-Gabriel Pageau, the latter of which figures to be a pretty valuable commodity around the deadline. He’s cheap now at $3M and will make a decent 2-3 center for some contender down the stretch. He also is an impending UFA, so he’s going to get a major raise which probably isn’t in the interest of the Senators.

The only pieces that figure to be around whenever this thing turns in Ottawa is whichever garbage Tkachuk son resides there and Thomas Chabot. You may have heard about Chabot playing 37 minutes in a game recently and averaging about 27 minutes per night the past couple months. I mean, why not play your future pieces into dust now while you suck raw sewage, eh? I suppose names like Filip Chlapik, or Rudolfs Balcers (which sounds like a gastrointestinal problem), or Drake Batherson (which definitely was a character in Knives Out) could make the list before the year is out but they have some work to do. The road is long for the Sens, let’s just say that.

For the Hawks, Robin Lehner gets his “revenge” game or whatever as a former Senator before Corey Crawford gets the hometown start in Montreal tomorrow, where he generally has flourished. Thanks to the demotion of  John Quenneville, which was done because the Hawks actually feared putting him on waivers, means that Dylan Sikura gets back in the lineup. Zack Smith also has this as a homecoming, having spent his entire career in Ottawa before moving south.

Neither the Senators or Canadiens are any damn good, so the Hawks might want to gobble up these points before seeing a rejuvenated, if not beat up, Leafs squad on Hockey Night. They’re getting close to the bye, which generally has seen them turn the motor off. And that’s fine if they’ve scratched this season. If they’re still planning on making something of it, these are games you have to have. Well, they have to have them all but we know how they do against other teams actually competing for playoff spots, but you know how this goes.