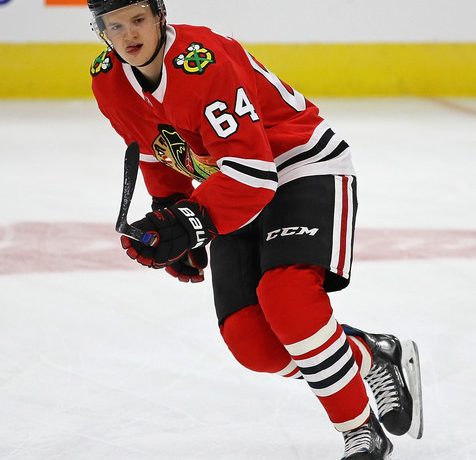 David Kampf is not a sexy player in any sense of the word—not in the general sense of a flashy player nor in the actual definition, see picture above as evidence—but he’s one of the Hawks’ only options for a defensive-minded center. He’s undeniably a bottom-six guy, but if he can flourish in a third-line role, so be it. He may not be Marcus Kruger when he was at his peak, but we’ll have to deal with what we have. Let’s take a look:

A Brief History: Speaking of Marcus Kruger, Kampf was basically groomed to be Kruger 2.0 last year since the actual 2.0 version of Kruger the Blackhawk was a disappointment (sequels always are, and yet they just won’t learn). Kampf centered the third line most of the time, taking over 60% of his zone starts in his own end, and he had a month-long stint on IR with a broken foot. The Hawks pretty much sucked during his absence, but then again, they pretty much sucked a lot, including when he was around. They re-signed him at a bargain price of $1 million a year for two years, so at least they’re not repeating the Artem Anisimov mistake and overpaying for a 3C/4C.

It Was the Best of Times: Ideally Kampf grows into being a shutdown center and a component of a not-vomit-inducing penalty kill unit. You could see him with Drake Caggiula or maybe with his elder version Ryan Carpenter, where they do the Spiderman meme and one is on the wing and the other is at center. Or, maybe Brandon Saad ends up back on the third line (kinda feels like when, not if, with the only question being duration), or whatever other jamoke from the collection they got going will slot in.

If Kampf can adequately handle dungeon starts and improve his possession to being above water, we’ll be satisfied. If he can improve his scoring we’ll be downright pleased. If he can help the PK be anywhere close to functional we may even be happy (no we won’t).

It Was the Blurst of Times: Kampf remains the definition of “a guy” and contributes little other than literally taking up space. He sucks on the PK yet Colliton has few other options so we’re stuck watching him there. And, he’s offensively useless and the Hawks have no one better to replace him with and/or can’t include him as an extra piece in a trade before the deadline. That’s a pretty bleak picture. Given the amount of jamokes I just mentioned, I imagine SOMEONE could take Kampf’s spot and he would disappear to the land of wind and ghosts unless we can trade him.

Prediction: Kampf will likely fall somewhere between the best- and worst-case scenarios just outlined (wow, there’s some hard-hitting analysis, no?). He’s not going to become some elite scorer or anything else other than “a guy,” but he will be a decent guy. Young, cheap, and with a defined role that he only needs to meet, not some lofty position he must reinvent himself to achieve, Kampf will be reliable in his own zone, fairly uninspired in terms of scoring, and not the dregs of the bottom six.

All stats from Hockey Reference and Corsica Hockey