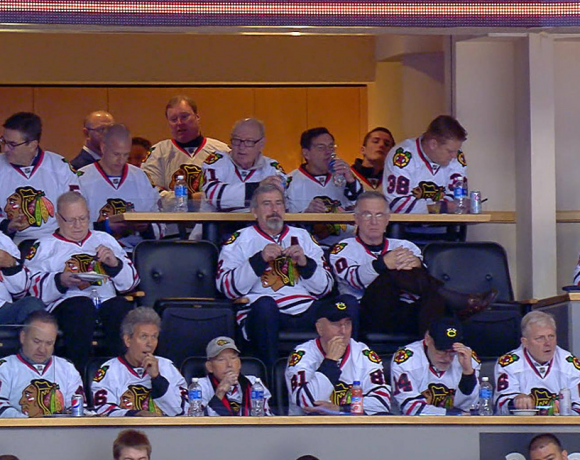 First of all, who takes all the Dads to Philadelphia and Raleigh? “Ok guys, we know most of you are sore all the time and sitting on a plane doesn’t help much but your reward is…a cheesesteak, liberty bell, and BBQ?” Let these altacockers get to Vegas or Miami or something. Most of them have spent a lifetime in a cold rink. Give them some warmth. Well, except Father Kane. You don’t want him anywhere near Vegas or Miami.

It’s not that the Hawks should stop the Dads’ Trip. It’s a cool thing to do for the players and their families, along with the odd year Moms’ trip. But what we don’t need is to hear about how special it is every fucking year. WE ARE USED TO IT, YOU DO THIS EVERY YEAR.

But every year, we get a long soliloquy from Pat Foley and Eddie Olczyk about what a special organization the Hawks are for doing this, because not every team does this you know? Except that they do, and the Hawks stole the idea from the Rangers anyway.

Saturday’s rant was even more precious, because they made special mention about how much it costs to do this for the organization. Because that’s what fans want to hear, the financial burden of flying the players’ fathers around to a couple different cities. Tell us, what do you think fans would prefer if it is so cost-prohibitive: The Parents’ Trip or lowering ticket prices? We’ll be over here when you have an answer.

It’s even more awkward as the Hawks and Rocky Wirtz are never hesitant to tell you about all the money they don’t make and how the Hawks are still in the red even after all the miracle work he and John McDonough have done, according to Rocky and McDonough. Well, if you’re a team that loses money then maybe the lavish extravaganzas like this aren’t necessary?

Of course that’s all bullshit, and the Dads’ or Moms’ trip is fine. The Hawks are so desperate that their fans and the rest of the league see them as a model franchise they’ll sell you just about anything. Clearly, the Hawks are scratching for any goodwill they can right now because most fans, and a fair number of voices within the organization, aren’t pleased about the firing of Joel Quenneville.

So do your trips and your luxuries for the players. But we don’t have to hear about it anymore. Not until you win some damn games, at least.