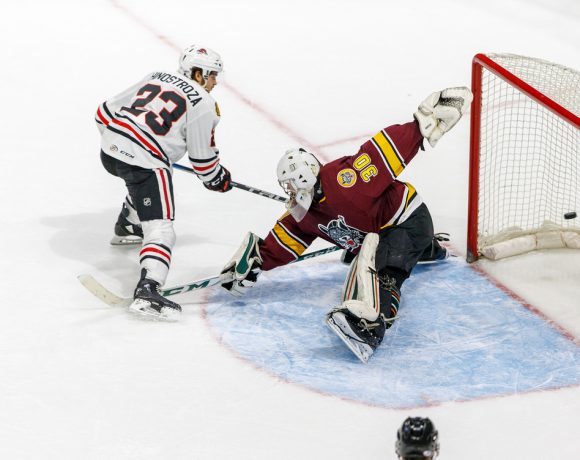 You’ve likely heard this several times from a number of sources, but here goes; Vinnie Hinostroza’s play is screaming for a call-up to the Chicago Blackhawks.

Whether there is a place for him on the Hawks roster or not, the young forward has played his tail off down in Rockford. He’s done just about all one could expect from a prospect looking to make an impression with the parent club.

The IceHogs took two of three games this week. Both wins were punctuated with highlight-reel shootout attempts from Hinostroza. Against Grand Rapids Saturday night and Chicago Sunday afternoon, Hinostroza confidently bewildered his opposition in net on the way to winning both affairs.

Oh, yeah. Hinostroza also opened the scoring Sunday with a great individual effort, deftly weaving his way around a trio of Wolves before beating C.J. Motte in front of the net.

Hinostroza maintained his point-a-game pace this weekend and leads Rockford with eight goals and nine assists on the season. He has either the game-winning goal or shootout winner in each of the Hogs last three victories.

When a player is sent down to the AHL, all they can control is their attitude and performance. After Sunday’s win, Hinostroza was asked by Chris Block of thethirdmanin.com about keeping focused on his game while in Rockford. His response:

I’m still pretty young. I’m here right now; I want to come here and work hard every day. I know in the end it will pay off. (There’s) a lot more hockey to play.

So far this season, Hinostroza is a textbook example of how to deal with the situation; he has been a dominant player for the IceHogs.

After pointing out that Alexandre Fortin hadn’t been very noticeable on the ice early this season, the rookie forward had himself a solid week. Fortin potted his first AHL goal Wednesday morning on a nice bit of skating across the Iowa crease. In Sunday’s win, Fortin picked up a pair of assists on two goals by Luke Johnson.

Also picking up his first goal of the season was Andreas Martinsen, who opened the scoring in Friday’s win over Grand Rapids. The primary helper on that goal was by Robin Norell; it was his first point of the season.

One trend that continued this week was the lack of goals on the man advantage. The IceHogs have now gone five straight games without a power play goal. In fact, they are in a 1-for-35 slump over their last eight contests.

To make matters worse, Rockford gave up shorthanded goals against Iowa Wednesday and Chicago Sunday. The one scored by the Wild cost the IceHogs at least a point; the Wolves picked up a point when they tied Sunday’s game late in regulation.

Before embarking on this dubious streak, Rockford used three power play strikes to pull off a come-from-behind victory against Grand Rapids October 28. At times, the passing has looked impressive, though that also leaves the Hogs open to turnovers.

The last time a Rockford power play was successful was in Iowa back on November 9. It’s definitely an area of concern right now.

Anthony Louis has been a scratch for the last four games. Following Sunday’s win, Hogs coach Jeremy Colliton revealed that both Louis and Darren Raddysh, who sat out the weekend,were nursing injuries. I would guess that neither was serious, as no players have been brought up from the Hogs ECHL affiliate in Indy.

Laurent Dauphin returned to action on Wednesday after being out for a couple of games after a big hit in Iowa November 9. At this time, the Hogs have just 12 healthy forwards and six defensemen on the roster. If Louis or Raddysh is going to be out much longer, I’d look for someone to come up this week.

That player could possibly be Alex Wideman, who has 11 points (6 G, 5 A) for the Fuel in 14 games. Nathan Noel, on an NHL entry deal with Chicago, had a pair of goals against Kalamazoo Friday night. Maybe the Hogs feel he’s ready to get into a game for Rockford. Perhaps Robin Press is recalled is Raddysh isn’t ready to roll by Wednesday.

For the second time in six days, the Hogs were on the short end of a specially-timed school day special. Wednesday, it was a young BMO audience that witnessed an Iowa triumph.

The IceHogs took a 1-0 lead midway through the opening frame immediately following a faceoff at the right circle. David Kampf won the draw, with Fortin scooping up the loose puck and skating right to left across the goal mouth. Fortin reached the left post ahead of Wild goalie Niklas Svedberg and cued the horn at 11:27 of the first period.

A Landon Ferraro tripping infraction gave Rockford a shot to stretch the advantage. Unfortunately, some sloppy play in their own end cost the Hogs the lead.

The power play started with some decent puck movement. However, Zack Mitchell was able to swipe possession from Matthew Highmore along the half boards and break out the other way with Colton Beck. Mitchell’s shot was stopped by J.F. Berube, but neither Highmore, Vinnie Hinostroza or Luke Johnson were able to control the puck and end the Iowa scoring threat.

Instead, Beck was able to beat three Rockford skaters to the loose puck and slide it to the waiting stick of Mitchell, who had looped behind the net to the left post after Hinostroza vacated the area. Berube never had a chance; Mitchell tied the score at the 16:43 mark.

The score remained 1-1 until halfway through the third period. Rockford was just finishing killing a Graham Knott tripping penalty. As the penalty expeired, Iowa’s Brennan Menell threw a puck wide of the goal that bounced off the end boards. The puck came to the blade of Sam Anas, who found Justin Kloos at the back door. Before Knott could even get on the ice, Kloos had given the Wild the eventual game-winner at 8:36.

The Hogs attack wasn’t razor sharp, but a strong performance by Jeff Glass made the difference for Rockford as they came out on top of the Griffins via shootout for the second time this season.

Andreas Martinsen got the IceHogs on the scoreboard in opportunistic fashion late in the opening period. Robin Norell got a puck past Grand Rapids goalie Tom McCullom from just inside the blue line. The offering clanged off the left post and came right out to Martinsen at the bottom of the left circle. The back-door chance found the back of the cage for Martinsen’s first of the season and a 1-0 Rockford lead at the 16:33 mark.

Some loose play in the neutral zone led to Grand Rapids taking a 2-1 lead early in the second period. Tomas Jurco lost the handle on the puck as he was approaching the red line, allowing the Griffins Eric Tangradi to drive into Hogs territory and score 1:52 into the period.

Minutes later, a Jurco clearing pass went unclaimed by Rockford. Some quick passing by Grand Rapids allowed Dominic Turgeon to skate to the right post and roof a backhand over Glass. Just 4:28 into the middle frame, the Hogs found themselves down a goal.

Rockford evened things up in the ninth minute after Luke Johnson won an offensive draw at the right dot. Vinnie Hinostroza collected the puck, did a quick back and forth with Ville Pokka, then sent a shot toward the Griffins net.

The puck never arrived, either striking Matthew Highmore or Grand Rapids defenseman Dan Renouf. Highmore collected the loose puck and fired over the glove of McCullom at 8:23.

That was it for the scoring in regulation, as both Glass and McCullom denied several excellent scoring chances. Neither team could find cord in Gus Macker Time. In fact, only Hinostroza was able to parlay some razzle-dazzle with the biscuit into a shootout tally. Glass had to stop three Griffins shooters to claim the win for the Hogs and that’s just what he did.

Rockford nearly dropped this one after surrendering a two-goal lead in the final minutes. They did, however, rally to take the shootout from the Wolves for their second-straight win.

Vinnie Hinostroza opened the scoring with a spectacular bit of skating midway through the first period. Taking a pass from Tomas Jurco out of the Rockford zone, Hinostroza skated up the right side into Wolves territory.

The IceHogs leading scorer slid into the high slot, then masterfully wove around three Wolves defenders to the doorstep of the Chicago net. Hinostroza flipped home the lamp-lighter over the glove of C.J. Motte to put Rockford up 1-0 11:21 into the opening frame.

The Wolves tied the score four minutes later when a shot by Paul Thompson slid under the pads of Hogs goalie Jeff Glass and settled right on the goal line. Ivan Barbashev tapped it across before Glass could locate the puck.

Rockford was able to take a 2-1 lead into the first intermission with a late tally. The play got started in the left corner of the Chicago zone, where Luc Snuggerud dug out the puck and found Alexandre Fortin open at the left point. Fortin’s shot was redirected by Luke Johnson past Motte and into the goal with just 29 seconds remaining in the first.

Following a scoreless second period, the IceHogs got a second goal from Johnson. Knocking in a nice pass from Fortin from the right post, Johnson made it 3-1 Rockford 5:39 into the third period.

As the final stanza wore on, that score held up and it appeared that the IceHogs were in control of what was a pretty even game up until that point. However, the Wolves mounted a late charge and forced Gus Macker Time with a pair of goals in the final 6:07 of the contest.

Jake Walman got a slap shot through after a clean Wolves faceoff win to close the gap to 3-2 at 13:53. A few minutes later, Rockford had a power play opportunity to slam the door on the Wolves. Instead, Ville Pokka’s cross-ice pass to Snuggerud was picked off, leading to a 2-on-0 shorthanded rush that ended with Thompson beating Glass glove side at 16:53.

It looked as if the game had gotten away from the Hogs, more so when Erik Gustafsson was called for interference in the extra session. Chicago had 1:25 of 4-on-3 to finish the comeback. Instead, Glass held firm and Rockford weathered the storm.

Jurco was denied by Motte in the opening round of the shootout before Hinostroza stick-handled his way into the net in the second-round attempt. Glass stopped Teemu Pulkkinen and Brandon Pirri before David Kampf ended the game with a successful attempt.

After winning their first two games with Iowa this season, the IceHogs dropped a pair of morning games with the Wild. Rockford will get two shots at that squad at the BMO Harris Bank Center this week. The Hogs host Iowa on Wednesday and Friday nights.

The Wild, who are right behind Rockford in the AHL’s Central Division standings, are paced by Zack Mitchell, who has 16 points (5 G, 11 A). Longtime AHL vet Pat Cannone is also a player that has victimized the Hogs in the past, mostly with the Chicago Wolves. Cannone and Colton Beck each have six goals and five helpers on the season.

Iowa has been effective in slowing the IceHogs attack in recent games. The Wild are capable of putting some bigger bodies on the ice and forcing Rockford away from scoring areas. Things could get a bit chippy with Iowa with two games in three days.

Rockford closes out next week’s action in Chicago. The Wolves gave the Hogs fits in Allstate Arena last season; Rockford was 1-4-1 in that building in 2016-17. Chicago in an uncharacteristic 4-9-1-1 and at the bottom of the Central Division. However, Sunday’s clash showed that the Wolves can turn momentum quickly.

Follow me @JonFromi for thoughts on the prospects in Rockford all season long.