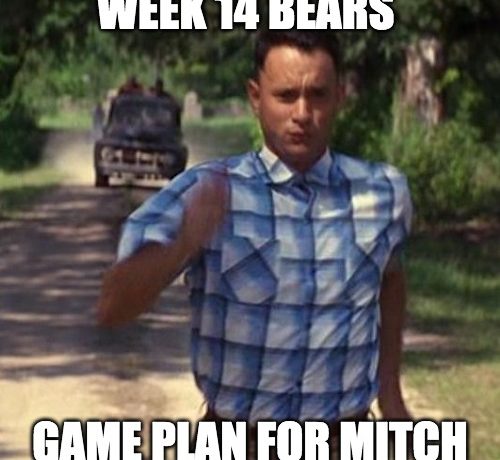 Matt Nagy finally did it. They finally let Mitchell Trubisky run around and do what he loves, and guess what? It was all a  Borat voice GREAT SUCCESS as the Bears win their third straight to go over .500 for the first time in 10 weeks with a 31-24 victory.

Mitch ran for 64 yards (season high) and a touchdown to go along with a 23/31 line and 244 yards through the air with 3 more TDs in what feels like his best performance in a long, long time. David Montgomery added 86 yards on the ground, Allen Robinson accounted for 48 yards and two scores and the Tight End combo of Jesper Horsted and J.P. Holtz combined for a line of 7/92 to round everything out. Horsted and Holtz represent big time positives from a position that’s been a massive disappointment this season, if not the last few years. That impact was felt in the successful run game as well, with the tandem’s ability to seal off the edges and get to the second level.

The Cowboys started things off with a the longest TD drive of the NFL season in terms of time and plays, a 17 play, 8:57 minute drive that resulted in an Ezekiel Elliott touchdown run and a 7-0 Dallas lead. A Trubisky INT at the goalline would give Dallas the ball back before the end of the first quarter, but from there the Bears would reel off 2 straight points and Dallas would not convert a third down until late in the fourth quarter.

Dallas would make things appear interesting with a few late TDs of their own, but the game was pretty well decided after a Trubisky TD pass to Allen Robinson to open the second half, capping an 11 play, 84 yard drive to put Chicago up 24-7 with Dallas reeling. A David Montgomery fumble (a play that arguably could/should’ve been stopped for progress, but whatever) late in the third quarter would help Dallas keep hope alive, but it would prove too little too late as Trubs led a three play, 60 yards TD capped by his rushing TD to ice the game.

The defense was frustrated on the opening drive, giving up swaths of yardage on the ground and unable to get off the field on third down, something they’re normally used to dealing with late in games. Pagano would tighten things up and make adjustments in the looks from his front seven, though, to stifle the Dallas offense of Dak Prescott and Elliott, and doing so mostly without Roquan Smith who left the game early during the second Dallas drive with a Pec injury.

If there was a negative for the Bears, it was injuries. Already without Prince Amukamara, Danny Trevathan and Akiem Hicks, the loss of Smith to what is likely a serious injury (you don’t get ruled out within minutes for a ‘minor’ pec injury) will make running the table in the final three games that much harder. Montgomery also went into the blue medical tent after a short carry with two and change left, again less than ideal. there was no immediate report on Montgomery, so we’ll all hold our breath until more news on Friday.

The Bears now have 10 days to heal up and game plan for Green Bay on the road. Things got closer than they needed to, but all in all a positive night that keeps the dream alive. Mitch was buzzing, Khalil Mack was alive (3 QB hits, 1 Sack, 1 TFL) and everyone went home happy…except for Jason Garrett, who might find himself without a job before he gets to the team plane.