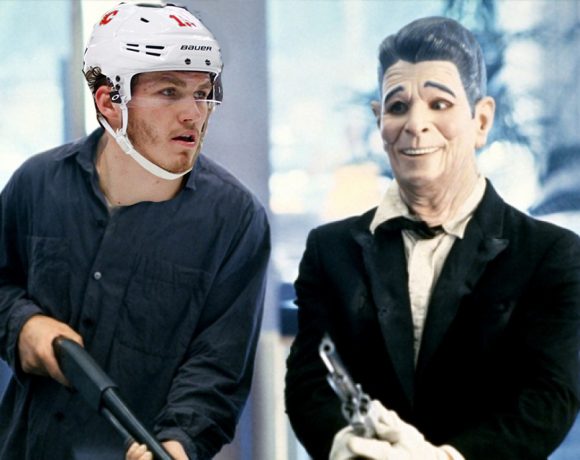 Game #45 – Flames vs. Hawks Spotlight: Matthew Tkachuk Is The Next Nylander?

Much like his father, Matthew Tkachuk is extremely annoying. Apple doesn’t fall far from the fuckstick and all that. He has pissed off pretty much every fanbase and player in the Pacific Division, and if he isn’t already he will soon reach Ryan Kesler levels of vitriol by anyone who has to deal with him regularly.

Tkachuk is on a real heater this season, He’s at 18 goals and 29 assists, good enough for 47 points. His career-high in points is 47 set last year. So the 90 he’s on pace for now obviously blows that out of the water. Which makes him awfully expensive, as it just so happens that he’s coming out of his entry-level deal.

This is where the Flames might not want to hear the word, “Nylander.” As he’s reset the market for players coming out of entry deals, there are going to be others who want to take advantage of that. Keep in mind that William Nylander only put up 61 points in his year before his extended holdout. Tkachuk looks a good bet for at least 80. $7 million might not even be the upper-limit for what he seeks. Tkachuk can’t even be knocked for benefitting from playing with Johnny Gaudreau or Sean Monahan, as he’s spent most of his time taking on much harder assignments with Mikael Backlund and Michael Frolik in the 3M line you’ve heard so much about. Tkachuk’s agent will be thinking about a lot more than 3 Ms come the summer.

Which will put the Flames structure and policies under the microscope. Gaudreau earns $6.7M per year, signed out of his entry-level deal. He’s clearly the Flames top star. Monahan comes in behind that at $6.3M. Are they in a hurry to pay someone more than him? We like to pretend these aren’t big deals in NHL dressing rooms, but we also know that’s a fallacy.

The Flames aren’t blessed with a ton of room, with somewhere around $14M available next season. Tkachuk will eat up about half of that next year, or he could. Both of their goalies are free agents, and while they’ll be delighted to send Mike Smith on his way, if Big Save Dave Rittich takes them far in the spring he’s going to need a lot more than the $800K he’s getting now. The season after next both TJ Brodie and Travis Hamonic are up, and the Flames are going to require a second pairing. Brodie especially could command a raise from his current $4.6M.

Man, what a burden it is to have a lot of good young players in the NHL.

It’s another example of just how hard the line is to balance. Looking it over, the Flames only have one really bad contract on the books. That’s James Neal‘s free agent deal from this past summer. But they’ll still have to figure out how to fit Tkachuk and others around that in the next two summers, while adding so they can get over whatever obstacle presents themselves. One more bad deal, to either their own or another free agent, and the Flames could start losing talent.

Which makes the hardball Tkachuk could play this summer a real adventure for them.