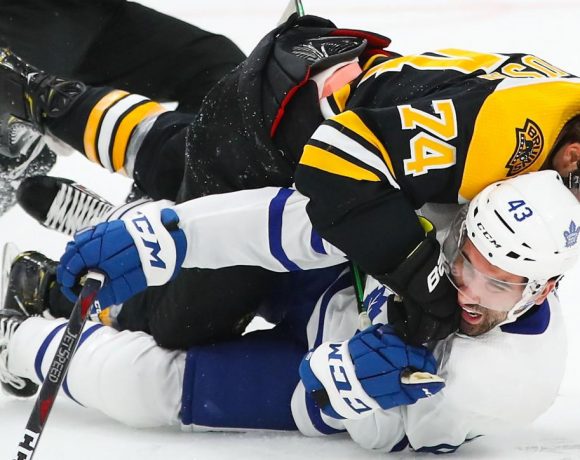 I know when the lights are brightest in the NHL that most analysts and media and players and coaches want to make it clear what makes their sport special. Or what they think makes this time of year special, even though no one has any idea. Or if they do they don’t want to tell anyone, for fear of…well, I haven’t any idea what they’re afraid of, but here we are. So the NARRATIVES flow like an open sewer downhill at this time. This spring, it seems that the amount of horseshit in every series has been especially amped up. Let’s keep it to this: the first night of the playoffs, during the first intermission of the Isles-Pens game, Liam McHugh set up professional hairpiece with a highlight of Brock Nelson’s power play goal and asked Eddie, “How did the Islanders score on the power play.” Eddie’s answer, “Confidence.” Jesus fucking christ.

So let’s start with the biggest story of the first round, the Lightning’s capitulation to Columbus. Last year, the story that everyone wanted to push was that the Caps intimidated the Lightning. That the Bolts were soft. They weren’t up for this kind of time of year, even though a great majority of this team has been to a couple conference finals and a Stanley Cup Final. Perhaps the main reason was that Braden Holtby was putting up a back-t0-back shutouts in Game 6 and 7 and John Cooper only used one puck-mover to bust through a Trotz trap. So those whispers and headlines were always bubbling underneath the surface waiting to be cracked open by anyone who didn’t want to bother to explain what was happening to Tampa should they not roll to victory.

Which apparently spread to the Lightning themselves, because there’s no logical reason that after just one loss, Nikita Kucherov and others should be running around doing a Tom Wilson impression instead of doing what they did all year, which is just score all the time. Now the Lightning are playing the wrong game.

And even then, really the only thing you need to know about this series are two numbers: .866 and .940. That’s Vasilevskiy’s and Bobrovsky’s save-percentages this series. Everything else is pretty much even, if not tilted to to the Bolts a bit. Vas is letting everything in. There you go. It doesn’t have to mean more than that. It doesn’t have to be more than that. One goalie is making stops.

Meanwhile, every series save the Flames and Avalanche and the Caps and Hurricanes has descended into a cesspool. The hockey has been pretty horrific to watch, and every goddamn whistle becomes a dick-measuring contest. We like our playoff hockey with passion and a bit of bile but this has gone beyond even a level of stupidity. Which is how you end up with Nazem Kadri, already a shithead, trying to be an axe-murderer. Or analysts trying to tell you how important Ryan Reaves is.

It’s been accented because there haven’t been that many close games. And when playoff games have obvious winners in the 3rd period, there seems to be some tenet of hockey written by someone who struggled to breathe that you have to act like a petulant child. That you have to “send a message,” which doesn’t amount more than to losing like an asshole. Every other sport, if you were to clobber guys in the lane in the NBA in the 4th quarter or start throwing at guys heads in the 8th inning of a loss, you’d be mocked endlessly and probably suspended. In hockey it’s the thing to do. I guess I shouldn’t be surprised, as hockey is filled with a bunch of rich white kids who tend not to react well when things don’t go their way. Taking it on the chin isn’t in the vocabulary.

This kind of thing tends to dry up as we get to the business end of series and moving on or going home gets awfully clear in the viewfinder. We can only hope. I already watch Monday Night Raw for my fill of bad booking.