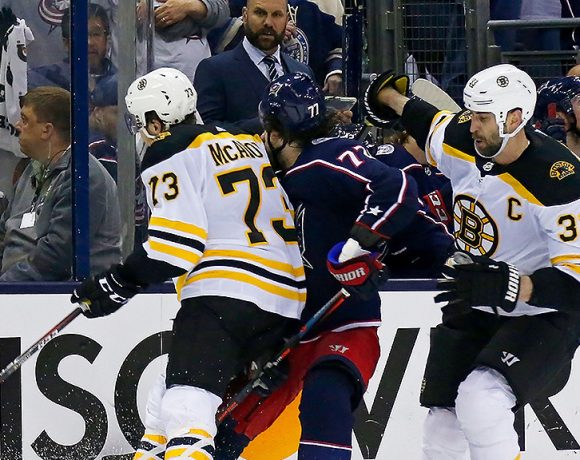 We’ll never know if John McIsaac and Kelly Sutherland had thoughts of Vegas-San Jose Game 7 traipse through their head when trying to assess a penalty to Charlie McAvoy last night. It would not be a surprise if it did, and what happened to those officials. Officials want to rise to the top of their profession just like anyone else, and seeing their colleagues hung out to dry and then sent home for the summer certainly could easily have been a factor.

Make no mistake, Charlie McAvoy should have been given a major penalty, booted, and suspended for multiple games. He left his feet, came from the blindside, and hit directly to Josh Anderson’s head. I don’t know what other qualifications you need.

But the because the NHL is so terrified of pissing off its knuckle-dragging fans and media (probably more the latter), because for some reason it’s mortified at the thought of a Don Cherry or Brian Burke rant on Canadian television about how the game is lost, this is what we get. A minor penalty, which won’t do much to deter hits to the head that the league claims it wants to do away with to preserve the safety of its players.

And because officials have seen what happened to other refs who have deemed to punish to heavily, they are gun-shy. NHL officials always have been, and while I try and give them as much credit as I can because the refs in other sports can be so awful, they often lean too far the other way. “Let the players decide,” is a fine mantra, but lean into too far and you’ve ended up ignoring what the players have decided. When one player forces another into a penalty/foul, they have decided that one team gets a power play. When you ignore that, all normal hockey goes out the window and you bring your star players down to the level of those who can’t emerge from the muck. You may bitch about NBA refs being too obtrusive, but the NBA playoffs are still a stage for the best they have to do what they do and they dominate the headlines (some of that is the difference in the sports). When you’re asking Nathan MacKinnon or the like to survive being tackled and now possibly beheaded at every turn, you ground down what makes them rise above the rest, and hence their team.

That’s also the not the exact discussion here. When the league threw its refs from San Jose-Vegas under the bus, it pretty much pulled the rug out from under all the refs. The idea, in theory, is that the officials are the representatives of the league and are administering the game. All the NHL has done is create a separation, make it seem like they work for the teams now, and leave the refs on their own. Which would undermine their authority.

And that gets even more undermined when they’re terrified to make the right call, for fear of being singled out by the league again. No team deserves an apology for a ref’s call. The ref didn’t make the Knights give up four power play goals in five minutes. The refs didn’t make them not score in overtime against a depleted and exhausted team. The refs aren’t why the Knights lost.

Bad calls happen to every team, and it’s part of the accepted system as currently fashioned. The refs weren’t looking out to screw the Knights, the only situation that should have earned an apology. If the league thought those refs made the wrong call, there is a grading system in private already in place and they should have just been quietly not assigned the next round. All referees accept this when they take the job.

“Not deciding the game” is also a red herring for officials. After all, not making a call can swing an outcome just as much as an over-aggressive call. Last night’s miss on McAvoy probably didn’t cost the Jackets the game, but you can see where a similar one would. And now if the league were to suspend McAvoy, which it should, it will be publicly hanging out their refs to dry again. It will have no choice.

The league could help refs of course by clearly outlining that any hit to the head is a major, game misconduct,  and a suspension whether you meant it or not. Do you want these hits out of the game? Miss on the high side then. It can’t get more clear-cut than McAvoy’s hit last night, but there will be others. You’re not going to change the behavior and make players adjust how they play until there are serious consequences, no questions asked. It will be an uncomfortable six months, or full season, with some questionable decisions and old men yelling at clouds before they soil themselves.

And then it would change. Players wouldn’t take hits they weren’t sure of. Muttonheads who can do nothing else would be out of the league, and that would be a good thing. Players adjust. Look at what happened with interference calls and slashes and hooks. They’re still around, but players know the deal and play the game differently. It’s pretty simple.

The league needs to back its officials, even when they’re wrong. It’s part of the game right now, and they need the support. Did Marc-Andre Fleury apologize to the fans for turning into Wile E. Coyote for a period? No. His mistake(s) were no less than the refs. It’s just a matter of degree. The refs won’t call this how it should be if they don’t think their bosses have their back. The refs are out there in the field of play and take the brunt. They’re the ones enforcing the decisions made above them. They’re the ones influencing games, rightly or wrongly. How can they do that when they feel they have no backup?