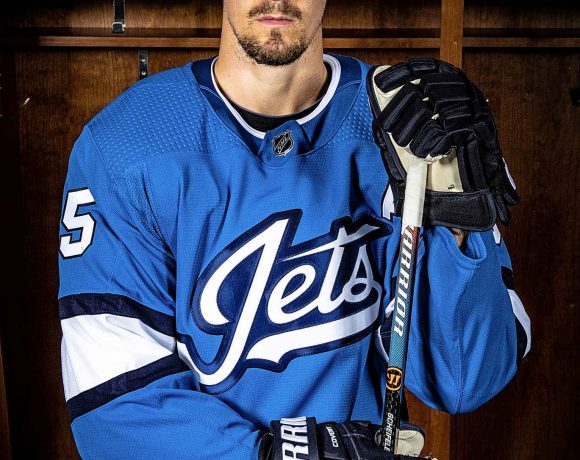 Thankfully they won’t be wearing them tonight. Which is great, because the Jets third jerseys are woeful and a complete waste of time.

They look like beer league jerseys, or something out of a 70’s movie that didn’t have a budget for anything else. The name “Jets” is generic enough and these jersey seek, and succeed, to surpass that. The rule of hockey jerseys should be never tell us what you are, show us what you are. That means no script logo. There has never been a jersey with lettering on the front that’s been any good. The Ducks jerseys that had them sucked, so did the Penguins from years ago, and the Rangers have had the most bland jersey for the entire history of the NHL. At this point it’s intentional.

A third jersey should be a time to use an alternate or throwback logo. We’re not huge fans of the old Jets jerseys either, which used script as well. But it would have been better than this couch-blanket for a baby looking thing. Why not take the opportunity to take the shoulder logos from the main home jersey and use that as the main logo? Fuck, why not just wear New York Jets colors? That would have at least been interesting.

This also is a color that harkens back to Thrashers days, which the Jets scorched on their way out of Atlanta. For whatever Thrashers fans there are left, it’s something of an insult (as is the Canes use of the Whalers jerseys and on a much larger scale but we’ll get to that). And certainly no one in Winnipeg has or wants any connection to the Thrashers.

The NHL has a jersey problem anyway. It probably should go back to the home whites, or better yet do away with home and away jerseys altogether and just have main and alternate. Hockey would look so much better with color vs. color games, given the way it would pop against the backdrop of the white surface of the ice. But thirds are a chance to really do something creative, be it throwback or something new like the NBA sometimes features.

So which is this? It’s neither. Which is why it sucks.