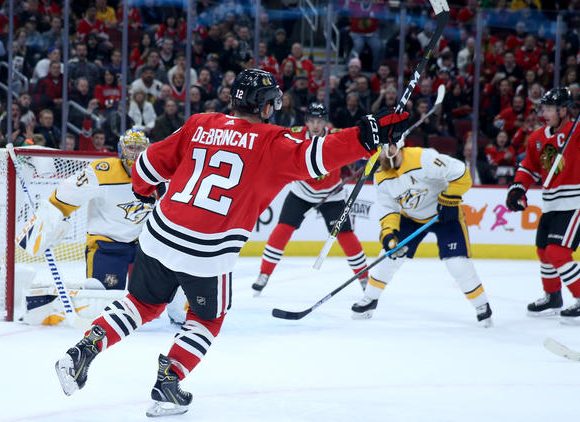 The Hawks had no business keeping this game as close as they did. The Predators should be wondering what witch doctor they crossed who kept them from closing this out way earlier and robbing them of both points. Let’s get to it:

– For about the first three minutes the Hawks were outshooting the Predators and looked in control. Nashville quickly righted that situation and within what felt like a nanosecond, Colton Sissons (who sounds like some asshole high school quarterback from Texas) scored to take a 1-0 lead. The Hawks did score a power play goal in the first but then gave the lead back in what actually was a nanosecond (OK, it was like eight seconds later). A four-minute penalty was thrown in there, and with the exception of a solid power play the Hawks got domed in the first—behind in shots (17-13), goals (2-1), and possession (56-44 CF%).

– The Hawks managed to pull their shit together in the second and killed off the remainder of the four-minute penalty. They kept taking dumb penalties through the period, but Jonathan Toews scored a short-handed goal on Kampf’s tripping of Viktor Arvidsson right at the end. The PK looked very shaky at times but not at that moment. In fact, the pass from Kruger was perfectly placed as Toews was streaking into the slot, and his precision getting it past Rinne while moving at top speed was a thing of beauty.

– We’ve been saying for basically the entire season that Alex DeBrincat is not a fucking third liner, and apparently Coach Cool Youth Pastor came around to that notion today, because Top Cat was finally back on the top line. And what did he do? Scored a goal and had seven shots on the night. The goal was on the power play off a pass from Kane, and the entire play showed once again that Kane and DeBrincat work extremely well together, and every day that they’re not permanently on a line together is a crime against basic common sense. No, playing with Kane wouldn’t put him on the top line but the point is that DeBrincat should be in the top six. Don’t bother with tonight’s experiment with Saad on the stupid third line that is already pretty useless with Kampf and Caligula. Put Saad back with Toews and Kahun, and play DeBrincat-Strome-Kane. That’s a solid top six. I feel like I keep saying some iteration of this into the ether and you know doing the same thing repeatedly while expecting a different outcome is the definition of insanity. Thanks a lot, fucking Hawks.

– Anyway, they didn’t have many power play chances but the one they scored on had the movement we’ve been braying about over here, along with Toews in the high slot drawing defenders, which left Top Cat open for Kane’s pass. So maybe all that repetition isn’t totally insane.

– By the third it was pure luck that kept the Hawks in it. Nashville had a 58 CF% in the period and it was a whiffed shot and an untimely post that kept them from taking a two-goal lead. And they managed to let Wide Dick Arty score, so you know there was some combination of bad breaks and foolish mistakes. It only took about a minute into OT for Filip Forsberg to put it away with his second of the night.

– Henri Jokiharju had a solid return tonight, with a 63 CF% and a team-leading 23 CF% Rel. It’ll be interesting to see how Colliton maneuvers the defense when Seabrook returns from his bout of acute suck-itis that kept him out tonight.

– On a bit of a side note, the intermission segments on the broadcast tonight really epitomized how this league has no fucking clue who or what it is, or what it wants to be. The first intermission had a (very staged) segment with PK Subban handing out sweaters to a couple teammates, and they were made from recycled plastic supposedly taken out of the ocean. I’m skeptical of some greenwashing here, but nevertheless it featured timely themes, a black player, and was generally forward-thinking/feeling. Then, in the second intermission, we got Mike Milbury and Keith Jones showing grainy, shitty footage of themselves fighting fellow oafs back in the day and guffawing about how hilarious those days were. It couldn’t have been more backwards-looking or contradictory if someone had set out to make these segments as jarring as possible. Clearly there are multiple voices trying to direct these broadcasts, but the old guard has not lost that battle yet.

Back to the Hawks, they were fortunate to get one point since it was really Collin Delia bailing their asses out with a couple big saves in the third that even allowed them to get to OT. It won’t mean much in the end, but we’ll take it, right? Onward and upward.