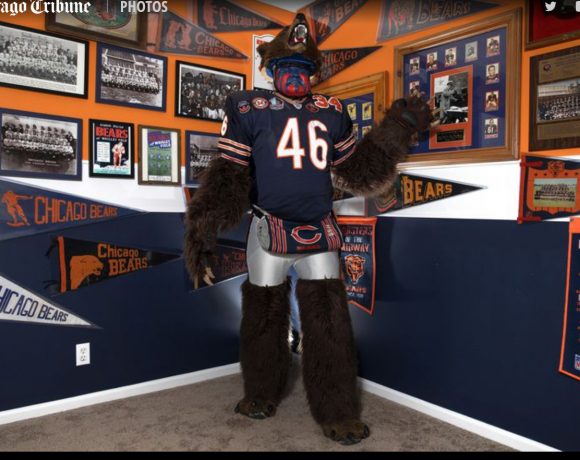 Welcome back to the last regular-season edition of THE VAULT, my weekly column dedicated to giving you 700 or so words about a nightmare of games past. For the 4th straight season, the Bears and Vikings will clash on the final week of the NFL’s regular season, and the words I’ve seen being used to describe this game are as follows:

This shit reads like a Kafka short story. So, in the interest of keeping myself interested in this bit, I’m going to go in-depth on last year’s season finale (a 24-10 Bears victory) as seen through the eyes of a fictional Bears superfan going through what could be best described as an “existential crisis”.

As Gregor Olson awoke one morning from uneasy dreams, he found himself transformed in his bed into Don Wachter (AKA “The Bearman”). He lay on his bed in suburban La Grange, Illinois, and looked at the dark ceiling. His alarm was going off, it was 3am. Time to get ready. Gameday. Noon. Bears/Vikings.

“Who am I? How did I get here?” It was no dream. Gregor’s room had transformed from the modest empty desked cold space he knew into one adorned with pictures. Pictures of him.

But that wasn’t him; it was just a facimile of him, like a bad photocopied picture. Him, with so many of his heroes: Bryan Cox. Donnell Woolford. Steve Stenstrom. What he wouldn’t have given to remember times like those. Times that he could use to help explain the situation he found himself in. How long had it been since he became The Bearman?

As if one might breathe or reach a hand to rub a bruise, Gregor was instinctively already at his dresser. His makeup was already halfway applied before he realized he was doing it. “What sort of rabbit hole have I fallen into? Hello?” he yelled. Silence returned his cries, and as the echo bounced off the walls of his rented room, he looked back at the mirror to see his costume for the day already applied. Everything fit perfectly, as if he had worn them in for years, though Gregor’s eyes still saw his old body. His soft limp now gone, he began to operate the body of The Bearman as if it was his own.

In a weird stasis between disoriented and confident, he got into his 2010 Toyota Bear-olla and made his way to Soldier Field, ready to watch the 11-4 Bears face off against the 8-6-1 Minnesota Vikings. In the car, Gregor began to feel more and more uneasy, considering he wasn’t even a sports fan, let alone a football fanatic! His brain began accessing stored knowledge of the current roster, the past legends, and a bunch of useless knowledge about RPOs. Gregor decided to fight it, for if he couldn’t control the whims of the body, he could certainly call out to the world for help, to free him from this prison.

Soldier Field was empty for gameday, and the security guard welcomed him as “Don” before asking why he was there if the Bears were in Minnesota to play at 3:25, having been flexed into an afternoon slot.

“Don, are you feeling okay? You look kinda queasy.” The man said.

“Please help me!” Gregor screamed. Gregor was trying his best to get out. He needed to be free. Free of Bearman. This had to end, Gregor was not welcome in the body of the Bearman. Gregor protested from inside of the Bearman, struggling in a way that to outside observers probably looked like a mild panic attack.

“PLEASE HELP ME!” The words exploded from Don’s mouth, propelled with all the force Gregor could manage to summon. Without another word, his foot pressed down on the gas and before he could blink an eye, the Bear-olla was on Lake Shore Drive. Gregor was no longer in control, the Bearman was in the drivers seat, literally and figuratively.

Gregor found the Bearman suit appalling, and when it dragged him into the Buffalo Wild Wings, he found himself even more disgusted. A lifelong vegetarian, Gregor knew this B-Dubs was where the final confrontation between himself, the very notion of free will, and his flesh prison would take place. As the game was playing on the TV, people came up to buy free drinks and take pictures with the Bearman. Everyone loves the Bearman. Let’s buy a beer for the Bearman. Let’s buy some wings for the Bearman. Boneless. Low heat, because the Bearman has low tolerance for spicy food.

“NO” he bellowed, the fake teeth on his Bear-hat rattling with the force of his rebuke. “I AM NOT THE BEARMAN.” As the bar fell silent, Jordan Howard ran in for his second TD of the first half, putting the Bears up 13-0. Cody Parkey’s extra point was unsuccessful, and for a moment, the eyes of the bar were no longer on the Bearman, but nervously darting around the room wondering if this team would be looking for a kicker before the playoff run.

“Bearman, what do you think? Should the Bears sign someone off the street?” A patron said, handing Gregor’s prison a steaming plate of wings. This was it, the time was now. The body of Bearman reached for a wing, and dipped it in the ranch. Gregor fought. Bearman won. The meat entered his body, and the soul of Gregor Olsen became infuriated. As if a medieval army about to unleash their final charge, he balled up all that he had and exploded.

Chunks of Bear jerseys with human remains littered the floor like so much confetti. The playoffs began next Sunday, at home. 3am. There remained a room full of fans who would not see it, nor anything ever again.

Tarik Cohen was running in for a touchdown. The Vikings season was over.