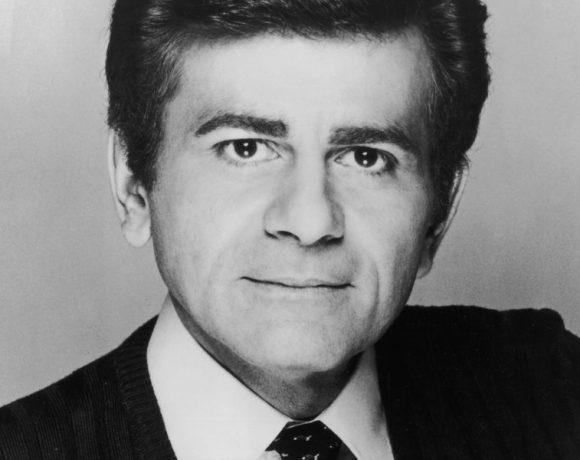 Week #3 – QB Study: Would You Rather Have CASE KEENUM As Your Quarterback?

Do you know who the quarterback of the Washington Redskins is? No? Well, when the Bears face the Redskins this week on Monday night, they will be going up against a quarterback who is quietly having as good of a season of anybody not named Mahomed or Prescott. Redskins QB Case Keenum–yes, Case Keenum–has started the season by putting up the following gaudy numbers:

There is not a single stat on this line that an OC, HC, or GM wouldn’t be ecstatic about. Now take it a step further and realize that every stat is better than what Mitch T is doing here in Chicago. Pay especially close attention to the 70% completion number, the 300 yards/game, the 5-to-0 TD to INT ratio, the two sacks taken, and finally, the 111.2 passer rating. If, and it’s a big if, these numbers continue through the next 14 games, Case Keenum will be in line for a Pro-Bowl appearance and more importantly for him, a huge pay raise heading into unrestricted free agency. Could this be a guy that is brought in to replace compete with Mitch Trubisky next season? Only time will tell, but I’m not counting it out and I’m not not excited about it.

Enough about next season, what can we expect for Keenum on Monday night? For one, you can anticipate most of his throws to be completed 10 yards from the line of scrimmage. Last week against a very good Cowboys defense, Keenum’s throw chart looked like this: 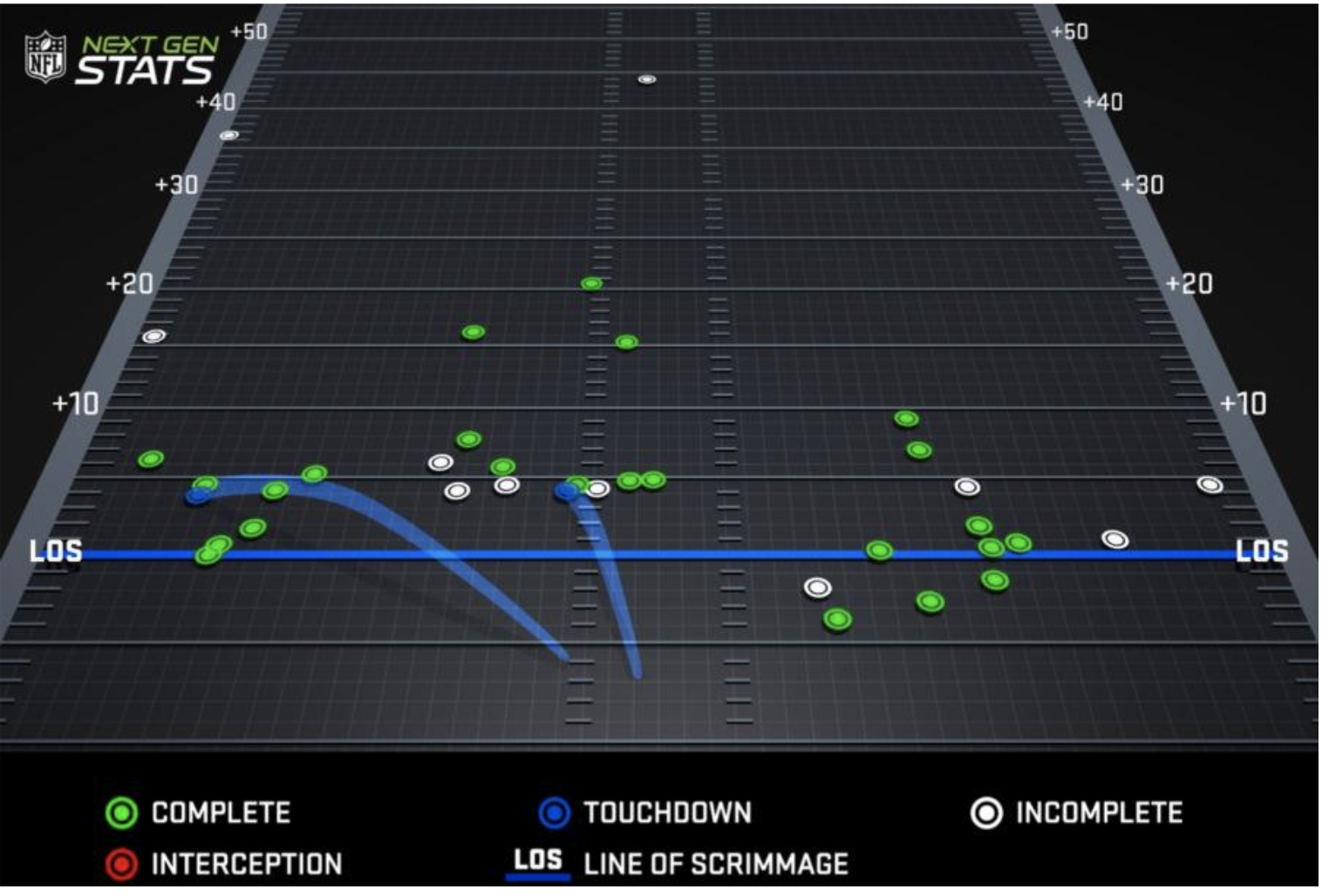 What also stands out is Coach Jay Gruden’s affinity for both traditional screen and tunnel-screen looks. 12 of Keenum’s 37 attempts were within two yards on the LOS. Additionally, only three passes over 20 yards were attempted. What all this means is that the Bears linebackers will play a significant role in pass coverage; something that they struggled with against Green Bay in the opener when Jimmy Graham was able to get open for much of the game.

The Redskins QB throw chart in Week 1 against an Eagles defense that quashed the Bears in the playoffs last season was very similar within that 10-yard range. However, the screen package was not as evident as most of the short passes were the 3-7 yards range. Keenum’s overall performance against the Eagles was uber-proficient: 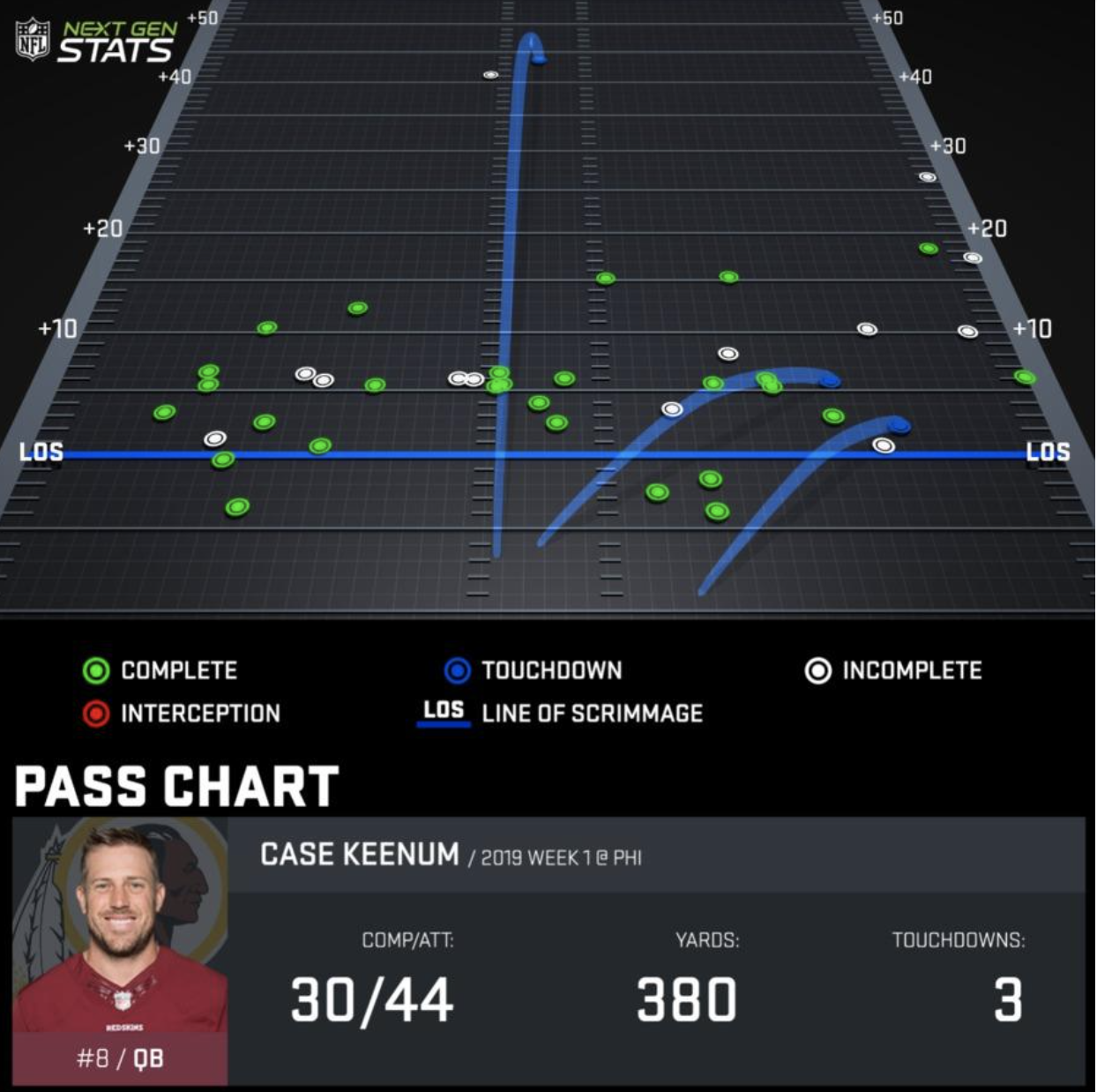 Just in case you were wondering, here is a quick snapshot of Mitch Trubisky’s performance against what amounts to same Eagles defense last year: 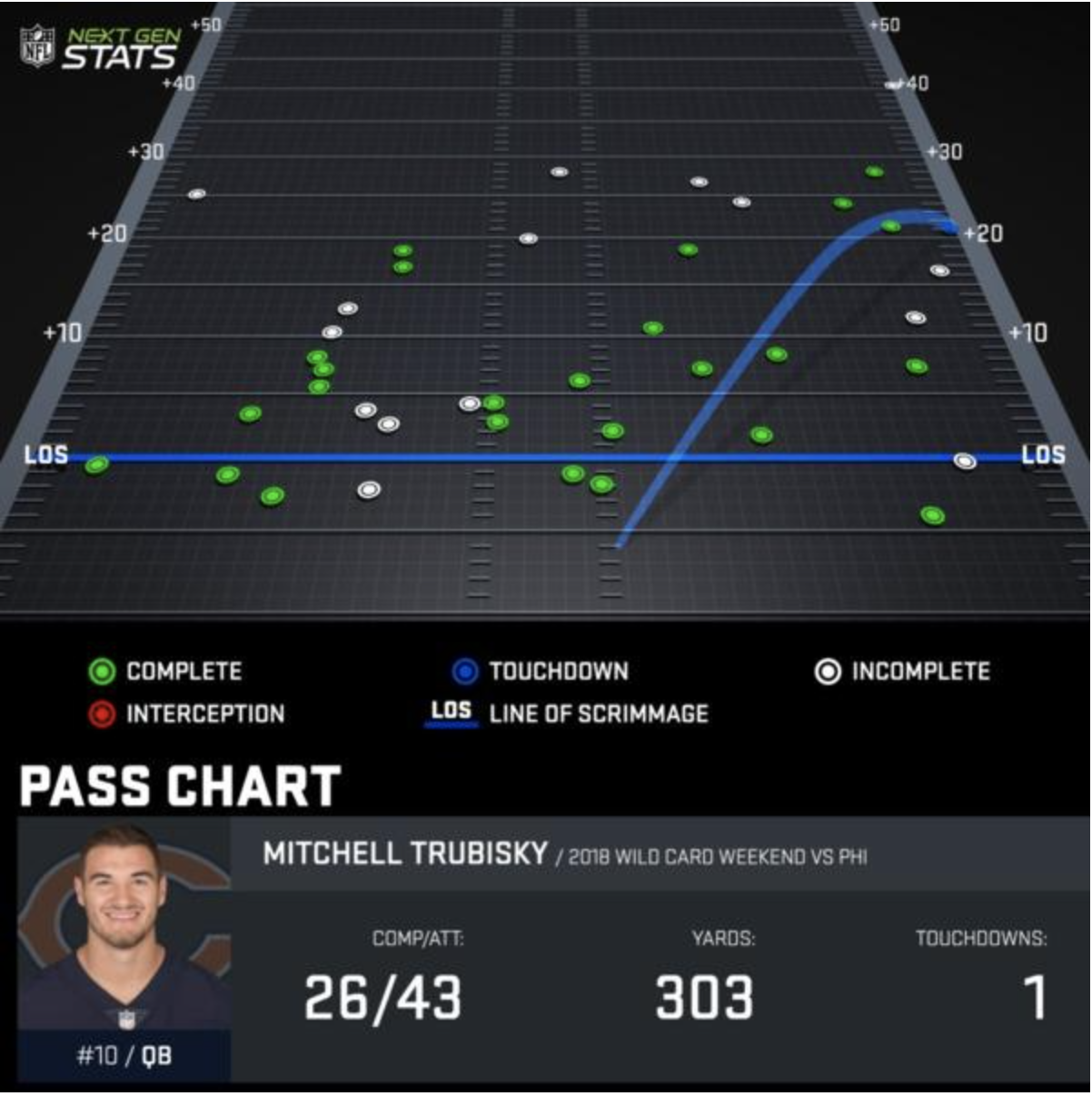 My biggest takeaway from comparing these charts was that Keenum was vastly more effective on virtually the same amount of attempts. What is ultimately most maddening about the overall comparison is that Keenum was undrafted while we all know where Mitch was drafted and what was given up to get him. Fuck!

Can Case Keenum Beat The Bears By Himself?

On Monday night, Keenum will ultimately be responsible for how his offense performs. The Redskins running game is brutal; rushing for 28 yards and 47 yards in their first two games. Adrian Peterson will go down as one of the greatest dads running backs in NFL history but it’s not 2009 anymore and Peterson is probably best suited not suiting up. The dire running back situation puts the onus on Case Keenum and his receivers to carry the franchise. Keep an eye on rookie Terry McLaurin, who has been phenomenal thus far with almost 190 yards and two TDs thru two weeks. However, in what appears to be an effort to ease McLaurin into the offense, he lines up exclusively on the left side of the field. If this trend continues, this will undoubtedly help the Bears match up with the electric rookie out of THE Ohio State.

So What Does This All Mean?

Reskins coach Jay Gruden is an offensive genius. He is going to find ways to match up his skill guys with linebackers and try to exploit as many of these scenarios within 10 yards of the LOS as possible. I think Case Keenum will continue to perform at an elite level and the Redskins will defeat the Bears in a very close game.