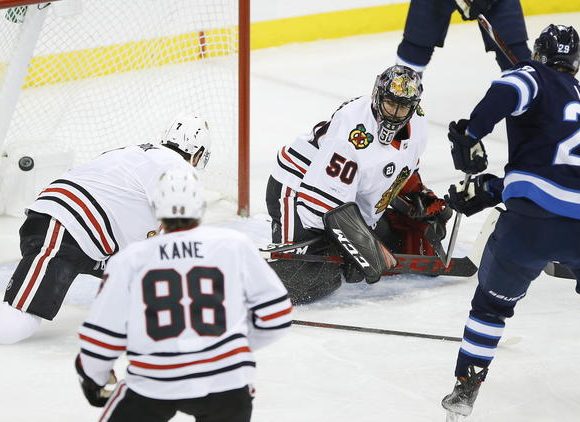 Well, what can you say about this one? We knew it was going to be rough, and right out of the gate it felt doomed. But then for a moment it didn’t…until it did again, until the third, and then… let’s just get to the bullets:

– We’ve all been rightfully bitching about a lack of scoring depth, so didn’t we get a treat tonight with five goals coming from the dregs: Marcus Kruger, John Hayden, Jan Rutta, David Kampf, and Artem Anisimov (no, I don’t really think Kruger is the dregs but he’s acting like it right now). Kruger’s and Hayden’s came in the frantic mess that was the first period, where it seemed initially like the Jets were going to run away with it, but these goals exposed how Hellebuyck was already having an off night and the Jets defense wasn’t at their best. Both came from rebounds in scrums right in front of the net, as did Kampf’s late in the third. So I guess there’s a moral victory in that our shitty bottom six and possibly worst defenseman managed five goals against ostensibly one of the best teams in the Western Conference. Honestly I’m shocked we scored five goals at all, so I’m going to take a cue from the sunny disposition of the Canadian announcers whose feed supplanted the dogshit Comcast one, and be pleasantly surprised with our offense tonight.

– The Jets looked beatable at many points tonight, which is contributing to the frustration here. Yes, they have ridiculous scoring (more on that later), but the fucking Hawks were able to tie it up once and come within one whiffed shot of tying it twice. Jonathan Toews had the game on his stick in the final seconds of the third and it looked like he either had some equipment malfunction with the stick, or just missed the puck. He was at the top of the crease and had Hellebuyck moving the wrong way but no dice. Either way, the Jets did not dominate in possession—they best they managed was a 53 CF% at evens in the second, whereas in the third they had a measly 30 CF%. In fact during the third the Hawks had multiple long shifts in the offensive zone with plenty of cycling but not quite enough finish. Connor Hellebuyck finished with an .839 SV%, so he continued his underwhelming ways. But the Jets’ raw talent was enough to overcome suspect defense and goaltending.

– About that…Jesus christ, Patrik Laine is a beast. He only had two goals tonight, which feels like a win right there. In the third he straight-up robbed a hapless Jan Rutta in the defensive zone and walked right in to score easily. This guy has had three hat tricks this month alone—and in three different countries! This is what I learned thanks to Canadian announcers: hat tricks in Finland, Canada, and the US. Just this November. He’s terrifying. And even though Laine had an off night with less than 17 goals, Nikolaj Ehlers did the honors by getting a hat trick instead. He also made our defensemen look pathetic, including picking off a pass from Gustafsson for an easy breakaway that led to his third goal. That was the real difference between the teams tonight: when the Jets needed just enough to get out of a jam, their insanely talented players could do it, regardless of the rest of the team.

– The DeBrincat-Strome-Kane line got split up in the second and brought back together in the third. Their possession numbers didn’t turn out great (about a 29 CF%), yet in the third they turned it around a little and were responsible for a lot of that cycling and puck movement in the offensive zone I mentioned earlier, except there was that no-finish problem too. Personally I think they should be given time to make things work, and I’d rather not see Jeremy Colliton get antsy and start hitting the blender on these guys.

– Hellebuyck had a bad night but Crawford’s wasn’t any better. Granted, Crawford was facing far superior scoring threats and has the shittier defense in front of him. After destroying everything that came his way a week or so ago, I guess a bit of a correction is to be expected. But games like this where a better opponent is caught on an off night are exactly the ones where we need him to be super-human. Help me Corey Crawford, you’re my only hope.

– The broadcast issues were a bit comical, since at least for me it kept cutting out every time there was a goal. Finally they went to the Canadian broadcast and I was not sorry to hear someone other than Pat and Eddie, even if it was a couple of backwoods tundra-dwelling clods drunk on Labatt.

Only another 48 hours until we get to do this again! And it’s against another elite team…aren’t you just counting the minutes?

Line of the Night: “Good things happen to good people.” —Random Canadian hockey announcer, with what was the most Canadian thing ever said.