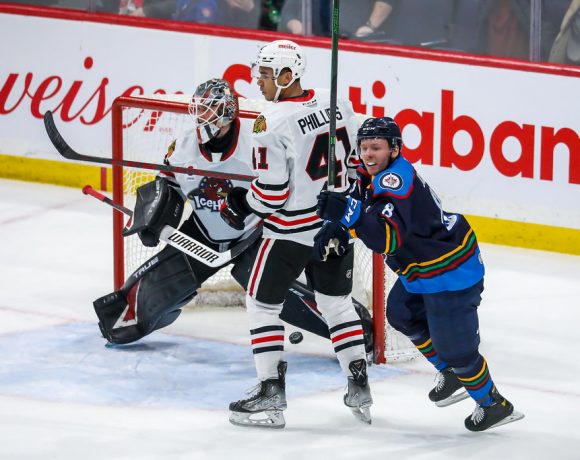 High On The Hog: Not Your Father’s Piglets

The Rockford IceHogs have a new look entering the 2022-23 AHL season. It’s a real paradigm shift for the organization, and I’m pretty excited about heading into another season of keeping you informed on the action out west of I-39.

Back in the spring, Hawks GM Kyle Davidson announced that bringing in veterans to raise the talent pool in Rockford was a priority. This was an easy statement to take with a grain of salt, since the IceHogs roster has been comprised mostly of prospects since Rockford became Chicago’s AHL affiliate in 2007.

Turns out, the organization followed through.

Over the summer, the Blackhawks, who enter their second full season of ownership of the ‘Bago County Flyin’ Piglets, made good on reshaping the roster. Veterans with serious AHL upside were brought in to fortify last year’s bunch of overachieving prospects.

The 2021-22 crop scrapped their way to fourth place in the AHL’s Central Division and won a play-in series with Texas before falling to the Calder Cup Champions, the Chicago Wolves. Leading the way was rookie Lukas Reichel, who is back for another season at the BMO after a strong debut of 21 goals and 36 helpers.

In addition to Reichel, the current IceHogs roster now has three players that paced their clubs in scoring last season. Many of the solid defensive pieces are back and are enhanced by a familiar face.

Let’s dig into the roster!

Guttman is the only rookie in this group. The returning prospects all were big contributors to Rockford’s success, as were Busdeker and Gicewicz. Mitchell enters his third season as the Hogs captain.

Gust (16 G, 20 A for the Wolves last season) is a player who’s been on my wish list for several years, though he’s exactly what the organization has avoided in past campaigns. The Orland Park native is a strong AHL player with a winning pedigree, having skated with the last two Calder Cup winners.

Lynch will chip in on the bottom six; he totaled eight goals and 13 assists in 46 games with Manitoba. Adams-Moisan is a big, physical forward that may wind up splitting time between Rockford and the Indy Fuel of the ECHL.

The addition of Sikura (73 points with the Colorado Eagles last season), Seney (59 points to lead the Toronto Marlies), and Philp (44 points with a strong Stockton Heat club) figures to give Rockford the kind of potency on offense that’s been missing in past seasons. If this forward group can consistently light lamps from the raising of the curtain, this could be a formidable group.

As the Hawks roster fluctuates, Buddy Robinson, who has cleared waivers, will probably wind up with the IceHogs at some point. The same goes for rookie Jaren Luypen, currently on injured reserve with the Blackhawks.

The major addition is the return of Clendening for his third tour of duty with Rockford. The 29-year-old defenseman is coming off a five-goal, 37-assist season with Lehigh Valley, his best point output since his 59-point season with the Hogs back in 2013-14.

The signing of Clendening to a one-year AHL contract was the opening salvo of the new development philosophy. He’ll be a mainstay on the Rockford power play and provides yet another upgrade to the talent pool.

Galvas and Phillips may see time in Chicago, rotating with other prospects like Alec Regula (currently with the Hawks) and Ian Mitchell (injured). Beaudin is back for his fourth season in Rockford. It’s likely his final chance to realize his potential as a former first-round draft pick.

Crevier, a seventh-round pick from the 2020 NHL Draft, is a big (6’8″) rookie who should see the ice on a regular basis. He will need to adjust to AHL forwards and contribute in the offensive zone.

Watson saw action in 20 games with Rockford and spent the rest of his season with the Fuel. Wilson has spent his first two years of pro hockey in the ECHL with the Kansas City Mavericks.

Anchoring an experienced team in net are two youngsters. Primary starts are likely to go to Soderblom, who was very impressive in stretches of his rookie season. In 38 appearances, Soderblom was 21-15-2 with a 2.76 goals against average and a .919 save percentage.

Stauber was signed to a two-year entry contract by the Hawks after two seasons at Providence College. Last season, he posted a 2.10 GAA and a .921 save percentage in 37 games.

Anders Sorensen, who really had his young bunch playing well despite being outmanned most nights, took over early in the season as the interim coach when Derek King was promoted to Chicago. Sorensen was retained to helm the Hogs in 2022-23.

Assisting him will be a pair of former IceHogs. Jared Nightingale was brought in mid-season and did a great job with the blueline and penalty kill. He’s back as well, and rightfully so.

Joining Sorensen, Nightingale, and goalie coach Peter Aubrey is Rob Klinkhammer, a former IceHogs favorite who is making his debut in the coaching ranks after wrapping up his well-traveled pro career with six seasons in the KHL.

The Central Division is no cakewalk, starting with the defending champs over in Rosemont. The Wolves lost a lot of pieces from last year’s juggernaut but are always built to compete. Manitoba returns most of last season’s second-place squad, and Milwaukee and Grand Rapids will also be tough opponents.

The IceHogs, on paper, look to be as experienced and as talented as any of their division rivals. Slow starts have always been an issue in Rockford. That’s been especially true in the last two seasons, which featured the greenest roster in the AHL by a wide margin. That shouldn’t be the case this fall.

The AHL season is full of ups and downs as roster moves by the parent clubs can have a huge effect on their affiliates. For the time being, it appears that Rockford is stocked with a veteran cast that should spend most of their seasons with the IceHogs. Davidson wants his prospects to play meaningful games well into the spring. Rockford is set up to do that; now it is time to see what the next seven months hold for this team.

Jerkin’ The Curtain In Manitoba

Rockford gets to work this weekend, opening the 2022-23 season with a pair of weekend matinees with the Manitoba Moose.

The IceHogs were 5-3 last season against the Moose but did not fare well on the road, managing just one win in four attempts in Manitoba.

The Moose had nine players that finished 2021-22 with at least 30 points. Seven of those players return to the team this season, including leading point producers Mikey Eyssimont (18 G, 24 A) and Jeff Malott (23 G, 18 A).