If The Standings Made Sense

We here at the FFUD offices have always railed against the NHL standings. The presence of the OTL point, the now gimmick 3-on-3 overtime, and shootouts in general have always given the league false parity. It’s rewarded genuinely bad teams while screwing over some actually good teams. It’s certainly skewed how some things are viewed. For instance. last year’s Hawks-Preds series was a 1 vs. 8 in the standings, but in reality the Predators only had four less regulation wins than the Hawks. It wasn’t that kind of gap, but the Hawks prowess in overtime  saw the gap in points. And as the Preds quickly proved, that gap was basically utter horseshit.

What’s funny is how hard the NHL makes this to look up. You can’t look up regulation wins on the main site, because they don’t want you to see that. You can only get ROW, but again, overtime is basically a bullshit, carnival game now so it’s hardly a measure of what kind of team you are. It just measures how many 2-on-1s it takes you to score. So you kind of have to Excel it from HockeyReference, which I’ve done here and perhaps not perfectly. So excuse me if I’ve fucked up. Here’s the list of straight regulations wins this season: 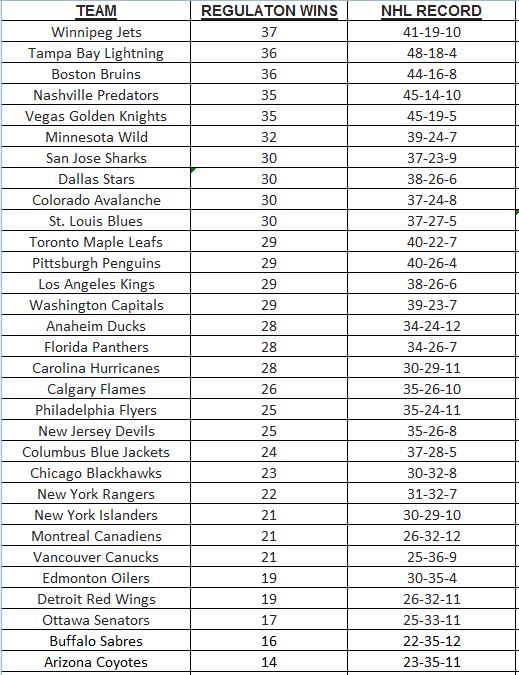 It makes for interesting reading on some levels. On the local level…well, not so much. If you throw out everything that happens after 60 minutes (just like all my late-night encounters HAHAHAHA SO VERY DROLL!), the Hawks are 23-32. Yikes. Anyway you slice that, it’s U-G-L-Y YOU AIN’T GOT NO ALIBI. That’s what happens when your goaltending and blue line blow, I suppose. So the Hawks can’t claim much bad luck overall, at least when it comes to overtime and such.

At the top of the standings you see the teams you’d expect. What’s also a bit curious for those of the red and black persuasion is that the other six Central teams are all in the top ten in regulation wins. Which shows you just how bad of a year it was for the Hawks to choose an off year. In the Metro or Pacific, they may have been far better off.

The Metro is funny, as the Penguins have the most regulation wins in that division but only the 12th most in the NHL. The Hurricanes only have one less win in 60 than the Penguins, but won’t sniff the playoffs because they’re getting clocked in overtime. Which you could say is fair because they lack true, top line scoring. Or you could say it’s a damn farce because 3-on-3 is a joke. It’s a little infuriating for Hawks fans I guess, because the Hawks only have one less regulation win than the Jackets and two less than the Devils and Flyers, and all three of those teams are competing for playoff spots while the Hawks have had a thumb in their ass for a month or more now.

Anyway, food for thought for you.