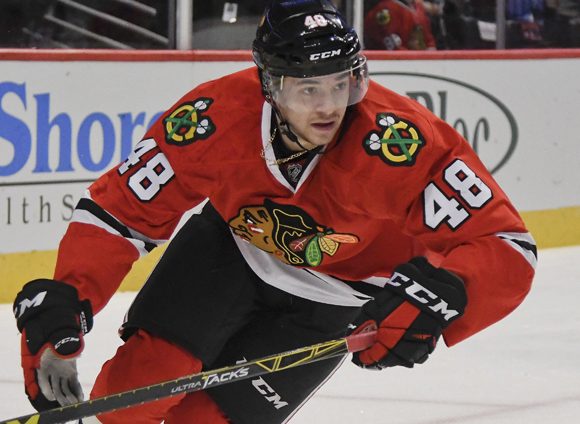 Generally on Friday afternoon is when anyone that has bad news to announce will release it, figuring most will miss out as they’re on their way home for the weekend and media departments are depleted. The signings of John Hayden and Vinnie Hinostroza to contract extensions aren’t exactly that, as they’re not bad news, but still basically flying under the radar before the draft.

John Hayden signed a one-way deal for two years at $750K. I’m just going to go ahead and state that if John Hayden has any serious role to play on the Hawks in those two years, the Hawks will then suck. Hayden really is only a body, and not even a strong or powerful one. He was sent down to Rockford in the middle of the season so he could play with the puck more, which he wasn’t on a fourth line. He then proceeded to not play with the puck in the AHL. I’m fairly sure “John Hayden” is another way to say, “Jimmy Hayes” or “Kyle Baun,” but will reserve judgement. The one-way deal is somewhat intriguing, I guess, but the Hawks have kept one-way deals down in the minors before and I fully expect if things turn around for the Hawks, that’s where Hayden can expect to be until injuries hit.

As for Hinostroza, he signed for twice that for two years, $1.5 million a year. As most anyone knows, I’m bullish on Vinnie Smalls as his underlying numbers suggest something of a secret weapon. Ideally he’s driving play on a third line and creating multitudes of chances against bums, and we’ll see if the Hawks can get him there instead of needing him to moonlight on the top six. I feel there’s a poor man’s Sheary or Guentzel here though, if the Hawks could stop fixating on his size for five minutes and worry about getting him and his game-breaking speed in open ice more often. $1.5 million might seem like an utter steal soon.

Anyway, that’s about it for the day. We’ll be here next week doing full draft-preview and maybe even reaction to a trade or two, given how the past has gone.