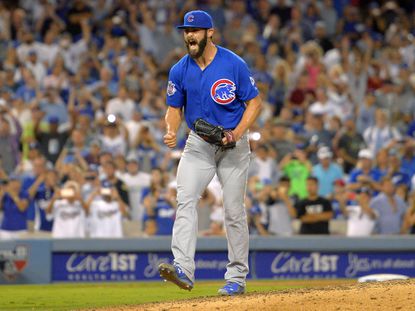 During the ensuing clown show that was the Cubs offseason, the front office acknowledged they needed to sign a new pitcher to fill out their rotation. Wouldn’t it be good if they could placate the angry fans after trading away Yu Darvish for a bunch of question mark young players and letting two pieces of the 2016 World Series team in Jon Lester and Kyle Schwarber walk? Killing two birds with one stone, the Cubs front office was able to calm the angry Twitter mob as best they could by signing Jake Arrieta to a 1-year deal worth a whole $6 million.

Jake Arrieta is a Cubs legend and a 2015 Cy Young Award winner – a season in which he posted a crazy 22 wins of 33 starts, a 1.77 ERA, four complete games and three shutouts, one of which a no-hitter. In three postseason appearances in 2015, he won two of those games, one of them a complete game shutout.

In 2016, Arrieta had 18 wins out of 31 starts, a 3.10 ERA and another no-hitter. These weren’t his 2015 numbers, but they still weren’t awful. Although his pitching was slightly underwhelming in the NLDS and NLCS of this year, he was able to come in clutch in two World Series starts, winning both of them and coming out of it with a total 2.38 ERA.

But if you’re reading this, you probably know all of these stats and remember them quite fondly. Here’s what Arrieta has been since then, however, since he left and went to the Phillies for three seasons. His ERA has been steadily declining with each year (3.96, 4.64, and 5.08 since 2018). He has pretty much split wins and losses in his starts and has thrown no complete games or shutouts since 2016. His 2020 stats were definitely not stellar, but it seems like Arrieta is hoping, like many players around the league, that last season would be an anomaly.

It is definitely fun to see Arrieta back with the club, and he will almost certainly be slotting in the starting rotation alongside Kyle Hendricks and Zach Davies. Arrieta is also in the twilight of his career at age 35, and it’s safe to say his pitching decline is among us. However, I am cautiously optimistic that Arrieta improves some on his 2020 stats and throws a few good games for the Cubs as our third or fourth starter, especially if he’s behind a nails defense.

Is he Yu Darvish? No, but few are in this league. Especially if the Cubs are able to get their offense going this season, I think Arrieta at this price isn’t too bad of a signing.