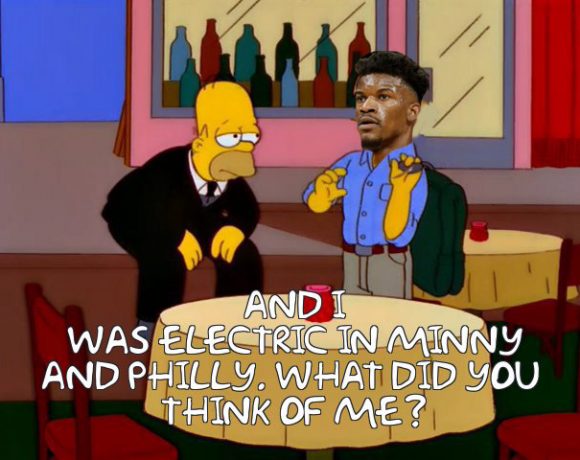 Yeah, we’re going to depart from the normal path for one night. And yeah, we saw he fourth quarter against Boston last night. It’s just setting up for a bigger crash. You just watch. Take the bait, Philly. It’ll only make our enjoyment better in a month or so.

Never has an overblown athlete ever deserved and overblown home like Jimmy Butler and Philadelphia. We eagerly await the spring and playoffs when these two both realize what they’ve gotten themselves into and have nowhere to go, and are left to bleat on about how important they are to the world with no actual proof.

Philadelphia’s greatest accomplishment was 250 years ago and they broke the damn symbol for it and proudly celebrate the fact. Also, the Constitution is greatly flawed and needs updating, but that’s another discussion. Ever since then the only thing they’ve been able to match New York in is volume. Philadelphia is the only East Coast city with no discernible identity other than sweating through your shoes and an overrated cheap lager. New York is a world city. Boston is a university hub, and far better at being insufferable assholes than Philly. DC is the nation’s capital. Even Baltimore at least has the harbor and great TV based there. And don’t even start with “It’s Only Sunny…” which much like the city is just a bunch of people yelling for no reason to try and get noticed. Fuck, even Philly’s state-mate Pittsburgh has been able to reinvent itself as a tech and university center. The only thing Philly reinvents is what object it’s going to throw at a police horse, when it’s not eating what that horse has shit out.

So Butler fits in perfectly. No one is more ready to tell you how great he is when he’s got nothing to show for it more than Jimmy Buckets. No wonder he hangs out with Mark Wahlberg all the time. Butler-led teams have won exactly one playoff series, and that was the year that Derrick Rose gave him the, “Here, you fucking deal with it!” treatment as LeBron was laying it on the Bulls’ forehead yet again. He bitched and moaned his way to Minnesota, where once the Rockets showed up in the playoffs he promptly pissed down his leg. Look up, “Talkin’ Loud And Sayin’ Nothin'” and Jimmy’s picture will be there. Except he’s made it a lifestyle. He’s sizzle to a rice cake.

Then he china-shop-bulled his way to Philly after embarrassing himself and the entire Twin Cities, and immediately demanded they change the whole offense they’d built over two seasons to suit him. Joel Embiid is going to pound him into styrofoam peanuts one day soon, and not a jury in the world is going to convict him. The NBA probably won’t even suspend him.

You just watch. When teams sag off Ben Simmons and make him shoot, and Jimmy decides to make up the slack, he’s gonna have more bricks than the Sinola cartel. And it’ll be everyone’s fault but Jimmy’s, and his first meeting with the press after the Sixers eat it will be all about how he looks forward to having more of the offense tilted toward him next season, daring the organization to defy him. He’s Jimmy Sosa.