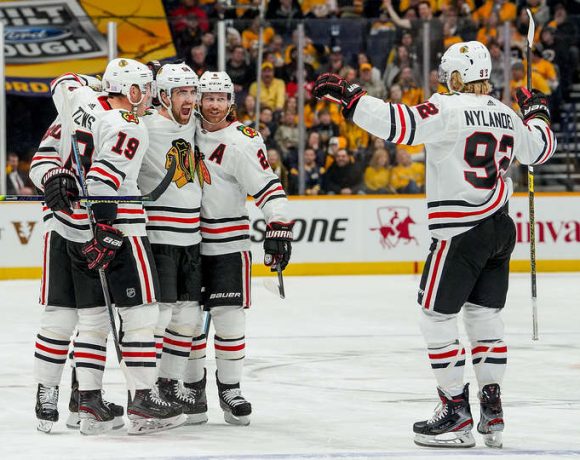 Game #19: Hawks 7, Predators 2 – Just By Chance You Crossed the Diamond With The Pearl

Guys…I think Pekka Rinne has a terminal case of shit hip! After basically laughing publicly at the Hawks’ terrible performance a couple weeks ago, Rinne got himself laughed right out of the game tonight, giving up 4 goals on 14 shots. Ya hate to see it. And this shit went full-on DLR. Let’s get to the bullets:

–Yes, Rinne was bad and Saros wasn’t great either, but the Hawks do deserve credit for playing better this time around. At first it didn’t seem that way—they spent way too much of the first period in their own zone, but they capitalized on bad goaltending and also a beautiful play from Kirby Dach to Dominik Kubalik. So it was a bit of luck and skill combined. And the pass from Dach to Kubalik was exactly why I’ve been complaining about Dach being marooned on the fourth line. He makes plays, he’s already improving his ability to hold onto the puck, and playing him with other skilled linemates will help the team now (see: tonight’s assist) and Dach’s development overall. Playing him with fourth-line bum slayers like Zack Smith will not. (Nothing against Smith even, I’m just making a point.) Doesn’t seem that hard to figure out playing Dach on the wing with Kampf and Kubalik is better than Dach centering two oafs, but whatever.

–The other funny thing about tonight was that the Hawks got domed in possession, but stats be damned I suppose. They had just a 45, 37, and 29 CF% in each period, respectively, and they were outshot 41-24, but thanks to ‘Ole Shit Hip not being able to stop much of anything and Saros not being much better, the number that really counts was in our favor the whole time.

–And let’s just be honest, the air raid offense was in full effect tonight. Seabrook’s goal was a fluky one that Rinne should have had, but Kampf’s goal was off a fantastic end-to-end play, where the Hawks got control behind their own net, moved the puck up and out, and passed it perfectly from Maata to Shaw to Kampf. Kubalik’s aforementioned goal came off a great play. Same with Nylander’s first goal. And you know what? I’ll be magnanimous about Nylander’s second too because it was a damn good shot set up by a great pass off the boards by Saad. The Hawks didn’t always control the puck or the play but they were able to get rushes and bury their shots. Would be nice if they could maybe hold onto the puck and stop giving up over 40 shots a night, but you know what they say about gift horses.

–Alex DeBrincat was excellent tonight even though he didn’t actually put the puck in the net. His ability to keep plays alive, and in particular getting the pass to Patrick Kane on the fifth goal, were outstanding. Piece of Shit Austin Watson wanted to obliterate him but couldn’t, and Garbage Dick didn’t miss once he got the pass.

–Lehner was fantastic again as well, let’s not forget that. Granted, facing 41 shots seems like an easy night with this team, but he still finished the night with a .951 SV% and absolutely kept the Hawks in it in the early going before the game was definitely in hand.

And with that, let’s not delay this DLR any longer…

Line of the Night: “That was a bad goal.” —Eddie Olczyk, stating the very obvious after Seabrook’s knuckleball on Rinne