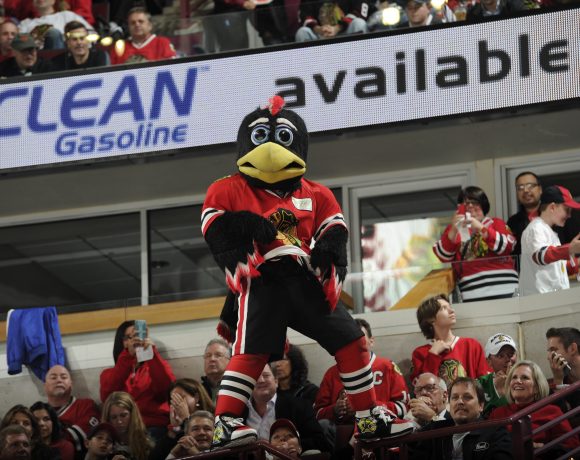 As most people know by now, I’m not a huge fan of “Kiss Cam.” But then again, I’m not really a fan of all the timeout entertainment, given how shrill and downright stupid it can be. And seeing as how I follow the Zappa school of “Love Is For Assholes,” Kiss Cam is particularly bothersome. But I accept it’s part of the American sports scene and isn’t going anywhere, and mostly just treat it as noise.

However, last night I was struck by yet another instance of the Hawks, or more to the point their gameday staff, unable to even get a finger in the wind. I don’t make every game like I used to, so I don’t know how long this has been going on. But now, Kiss Cam has an introduction from a young woman who has become something of the in-game, in-building host for all of their promotions. I can’t seem to find her name anywhere so if someone can help me via Twitter or email I’ll change this. Anyway, before Kiss Cam starts she approaches Tommy Hawk in a “Kissing Booth,” and well, you can pretty much figure out where it goes from there (he fixes the cable?). It’s nothing lurid, but it’s uncomfortable to watch this woman kiss a mascot.

I’m not sure what exactly the payoff here is supposed to be. Kiss Cam itself can be seen weird and somewhat creepy. And one day every arena is going to have to actually put a gay couple up there, but let’s save that discussion for another time.

In this current atmosphere, what exactly is gained by having this woman, clearly a little uncomfortable, kiss a mascot? And really, what is gained by having a mascot meant to entertain kids sexualized in any or slightest way? At best, it’s just awkward and weird. It could be viewed as something worse, and again there’s just no gain from it. It’s not funny, it’s not cute, it’s not anything but bad.

You’d think the NHL itself would want to put a stop to this, given that the Kings mascot is currently being sued for groping a woman, and we certainly don’t need to get into the litany of charges hurled at Benny the Bull for the bullshit he perpetrated in the very same building. You’d think someone in the Hawks organization would be aware of any of this, but then again we gave up on the Hawks have any kind of awareness long ago.

This clearly isn’t the first time the Hawks have tried to place their logo as the definition of “tone-deaf .”  (and boy could you examine that sentence for a while) And we don’t need to rehash all those instances that came before. But you’d have to be either incredibly stupid, naive, or worse uncaring to see all the stories and men in high places crashing down because of acting in an inappropriate or downright dangerous fashion toward female coworkers and think it’s all right to have this on camera in front of your home crowd. Again, what are the Hawks gaining from it? As silly as it might sound, the United Center is a workplace and on some level, those two are coworkers. Does anyone read or see the news in that place?

Usually, this is the part where I say it doesn’t matter because the Hawks are selling every seat. And that’s still true, but there are a lot more unfilled ones than there used to be. And I can’t help but notice that the t-shirt giveaways have tripled or more during timeouts, and I can’t help but wonder why that might be. Sure, the Hawks right now are only losing out on parking and concessions and merchandise sales when there’s only 18-19K in the building. But I’m willing to bet they’ve noticed. So why take a risk on anyone being offended, and rightly so, by this dumb sketch? Is it as bad as Ryan Kesler’s naked walk through the Ducks’ offices? No. But is it in the same genus? Yeah, sure is.

This really isn’t all that hard, and it’s hard to believe that no one anywhere in the building went to the gameday presentation staff and was like, “Uh, that’s not a good idea.” Hell, run it by us. We’ll do it for a beer (HA! A Wirtz giving away free booze! Let’s all sit on that one for a sec!) Why risk it? I really don’t know if the wave of disclosure of sexual harassment and assault is going to come to the sports world, I’m kind of skeptical it will given the different parameters and loyalty from the public. But if it does, why would you want this on your record? Why make this something of a gateway to what we know (or highly suspect) are a fuckton darker and worse actions that have happened from members of that organization?

As we know, the Hawks put the Ice Crew back in the mini-skirts after a season of trying to duck that controversy after it was brought up to them at the convention and they had them in pants for the following season. The Hawks and most of their fans may think things like this are hardly a risk or don’t put them anywhere near the line. They’re closer than they think and the wave might be coming. As my father used to say, “Mighty oaks from little acorns.”