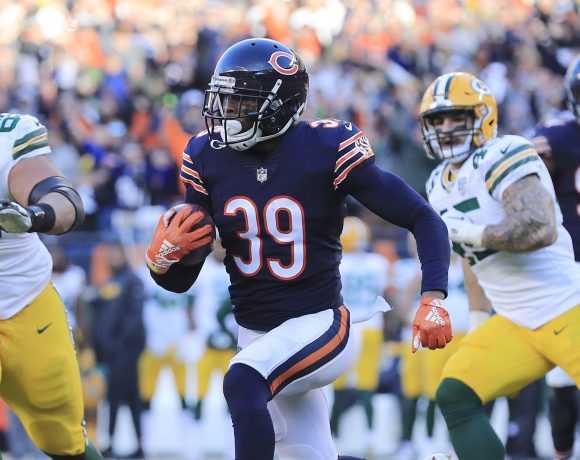 Inside the Matchups: Week 1

Welcome to week one of Inside the Matchups: another themed piece to help us break down the upcoming Bears game, where we look in-depth at the numbers and what they tell us about what might happen on the field. Today, our focus will be on Green Bay’s wideouts and Chicago’s defensive backs, since the only thinkpieces about Aaron Rodgers I want to read in 2019 are written for this site specifically. Yes, he’s probably the best QB of all time, and yes I do take an ungodly amount of joy in the fact that despite his talents, he will retire with only one Super Bowl ring. With that said, let’s break down the matchups on the outside for tomorrow’s season kickoff game.

-The Philosophy: How do the Bears plan to cover the weapons of Aaron Rodgers? It’s still somewhat unclear. Vic Fangio’s old system had the Bears line up with 5 DBs on the field on 76% of all defensive snaps, a clip that was 6th highest in the league. However, the true statistical anomaly is that on 95% of plays, the Bears played their outside CBs on their own exclusive sides of the field, with nickelback Bryce Callahan playing on whatever side of the offense he needed to. This will change under Chuck Pagano. I’m wondering how much leeway Pagano will give to his outside CBs to play to their strengths, Kyle Fuller’s softer zone and Prince Amukamara’s bump and run. The new defensive coordinator may roll the defense out in the same way, but I don’t know how it will look. We know Chuck likes to send extra pressure, but does he even need to with a front seven like Chicago’s?

Also, it needs to be noted that famous red-assed doofus Mike McCarthy is gone, replaced with Matt LaFleur. Unlike McCarthy’s dull West-Coast system, LaFleur instilled a truly revolutionary offensive playbook in *checks notes* Tennessee? Ew. Is Rodgers going call runs up the gut 34 times a game? No, but it’s important to know that he has pretty much been the opposite of McCarthy when it comes to formations and run/pass tendencies. Expect a lot of quick screens, and a devotion to keep his QB happy by putting him in the pistol a stupidly large amount of the time.

–The Matchups:
-Davante Adams vs. Kyle Fuller: Kyle was a beast last year, not gonna lie to you. Davante Adams was also a dog out there, with over 110 catches, 1300 yards, 13 touchdowns, and a catch rate of 66%. Kyle Fuller can’t cover Adams one on one strongly enough to inspire confidence, but #23 gets the edge because hopefully the Bears get enough pressure with the front four that he can cheat up on short passes and put his faith in Eddie Jackson and Ha Ha Clinton-Dix behind him to keep Rodgers from airing it out deep.

-Geronimo Allison/Marquez Valdez-Scantling vs. Prince Amukamara: Call me crazy, but I’m going to also give the Bears an edge here too. The GB depth chart after Adams is solid if we’re talking fantasy football, but in real life, Allison and MVS are middling wideouts who just so happen to play alongside a true generational talent at QB. They will put up good numbers, but neither of them are game-breakers. I’m less afraid of Prince’s ability to thrive in Pagano’s system than I am Kyle Fuller, so I’m expecting Prince to make a solid break on a short out and pick off #12 on Thursday night.

-Whoever isn’t on the outside vs. Buster Skrine: Okay, I know I had four $9 beers at Wrigley and told everyone in the bleachers that Buster Skrine was making the Pro Bowl as he sang the seventh inning stretch. Now, months later I am $36 in the hole and much more sober and I don’t have that same confidence. Buster will get picked on, since he gave up 8.3 yards per adjusted completion last year in New York. I know he has a much better front seven in Chicago, but I think he gets targeted quite a bit on Thursday. I’m taking the Packers wideouts on this one.

-Bears Safeties vs. Jimmy Graham: Not even a competition. Eddie Jackson for fucking President.

Overall: Bet on Chicago. There are just as many new wrinkles in Chicago’s system as there are Green Bay’s, so it will be exciting to see how those new things play out. Clinton-Dix and Amos both have familiarity with each other’s former team, but there’s hopefully enough new stuff there that nobody is coming in with an advantage, except Khalil Mack who has the advantage of being Khalil fucking Mack.

Prediction: Rodgers will throw 2 touchdowns, one on a busted coverage, but he will also throw 2 picks and be sacked at least 3 times. Bears win 31-17. FTP.