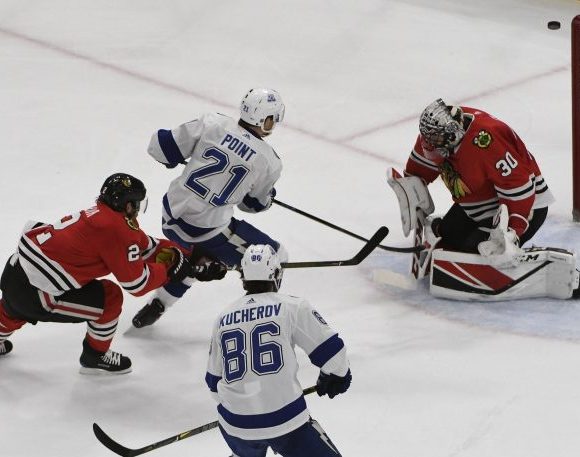 Well, I guess anything is better than last Saturday’s shitshow against the Islanders, right? Anything is better than the, well, I won’t even call it a half-assed attempt against the Red Wings, it was a no-assed attempt. Is this the most pathetic way to rationalize a season that is quickly disappearing down the toilet? Yes. Yes it is. To the bullets!

– The Hawks actually didn’t play badly—they got Glass’d. By the latter half of the second, they had outshot the Lightning by a decent margin (they ended that period leading in shots 30-17), and they dominated possession. They had a 64.5 CF% at evens in the second, and in the first they (barely) had the edge as well (51.7 CF%). The Hawks were pressuring on offense and had four high-danger chances in the second period, yet the Lightning got a short-handed goal late in the period, which blunted the momentum the Hawks had going that whole frame. And how did that come about, you ask? Chris Kunitz banked a shot off Glass and the Feel Good Story kicked it into his own net. And making it worse was the fact that it was on a delayed penalty thanks to Mikhail Sergachev being a general dumbshit. Yes, it appears that Kunitz made a hand pass prior to the goal and the play technically should have been blown dead. But shit happens, the Hawks were already getting the benefit of a penalty being called, and when your goalie scores on himself in that situation, you can’t really blame it on a missed call.

– Isn’t it just the damndest thing, when Kempny and Murphy play and Forsling and Rutta don’t, our opponents have fewer shots and we have fewer defensive breakdowns? Now, in full disclosure both Kempny and Murphy had pretty shitty numbers possession-wise (36.7 and 42.4 CF% respectively), and of course the Hawks still fucking lost, but giving up 31 shots to the league’s best team after they had given up 46 in the game before? You can’t tell me the personnel changes and these numbers aren’t related.

– In the most obvious statement of the night, Andrei Vasilevskiy is really fucking good. The Hawks had plenty of quality changes—e.g., Jurco in the second, Duclair in the third—and they had six power plays including a two-man advantage. Yes, their power play remains as terrible as ever, but Vasilevskiy still stopped 40 shots on the night. I just made the second-most obvious statement when mentioning the dismal power play, but we’ll just leave it at that. Still complete clown shoes.

– It felt like Patrick Kane was triple-shifted all night. In fact he wasn’t, but he did have a shitload of ice time: 23:30. Kane spent more time on the ice than four of our six defensemen (only Keith and Oesterle had more time, and for Oesterle it was a matter of seconds. Same goes for Toews but I’m not talking about other forwards here). Kane finished the night with three shots, and he and Schmaltz were moving even if they were dragging Sharp around most of the time. So I get why this happened, but when you have to play Kane that much it feels like a desperate move by a team running out of options, time, and trust, which is most certainly now the case.

On Wednesday the Hawks play the Leafs, who lost tonight to the inexplicably-on-fire Avs, who are in the process of leaving us in the dust in the Central as they’re tied with Minnesota and chasing other also-relevant teams. Have we passed the point of no return on this season and playoff hopes? It’s not entirely certain, and keeping a game like tonight’s close—when we’re playing a far superior opponent—almost gives you reason to hold onto hope, but that in and of itself is a harsh indictment of where we’re at. Onward and upward.