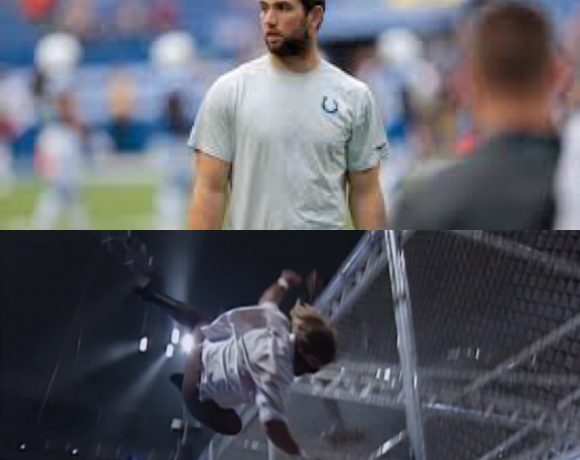 Wow. There are moments as a sports fan where you can say “I was there when ______ happened”. The Cleveland Cavilers come back from a 3-1 deficit to beat the Warriors. Keith Traylor returns a Mark Brunell interception 67 yards. Mick Foley gets thrown off the Hell in a Cell cage. Mick Foley gets thrown through the Hell in a Cell cage. Mick Foley gets chokeslammed onto thumbtacks. Andrew Luck solidified himself as the subject of a future bomb ass 30 for 30 documentary tonight with his 3rd quarter retirement from football. Dude’s 29 and has seen some shit, and you’ll see some takes about how disloyal he was to the franchise and the fans and blah blah blah. Don’t buy it. This team sucked for Luck, and then they fucked Luck, because Ryan Grigson is a schmuck. New Bears defensive coordinator Chuck Pagano fucked him as well, since both oversaw what was essentially medical malpractice when the stud QB injured his shoulder in 2015 and the team allowed him to play so that the then GM and coach could keep their jobs. He doesn’t owe the team a goddamn thing.

That said, holy shit what a shocker. I’m assuming he didn’t tell the team what was going on, and it’s an almost Aaron Rodgers level of pettiness to be out there shooting the breeze with his teammates knowing he is checking out tomorrow, instantly taking them out of the AFC title hunt. I feel for the dude, I really do, but I feel the most for Jacoby Brissett, because he is the guy that’s gotta cover for the guy who quit mid-shift and now he’s filling orders for two packers because Jeff Bezos needs to keep his profit margins as high as possible.

Oh yeah, the Bears played too. Honestly, if this wasn’t a player who I liked so much that was screwed by his team, I’d be making more jokes about how he retired due to the @CaptAndrewLuck Twitter account getting absolutely ETHERED by Prince Amukamara this week, or because Deon Bush’s pure dominance struck an almost existential fear into the heart of America’s preeminent neckbearded athlete.

Other takeaways from The Luck Game:

-Deon Bush has played himself on the field for the regular season if you ask me. He’s gonna get some snaps, and if HaHa struggles I wouldn’t be surprised to see him start a game or two. I also think James Vaughters makes the 53 man roster, and YES MY BOY SMOKE MIZZELL LOOKED GREAT ON SPECIAL TEAMS. We all have those bubble guys that we root for, and seeing Taquan turn on those jets while covering punts and making tackles on kickoff returns was a thing of beauty.

-Eddy Pineiro crushed that 58 yard field goal and it was a thing of beauty, and nailed all his kickoffs and extra points. Can we stop with the kicker stuff now? Please?

-I said it last week and I’ll say it again, Kerrith Whyte makes this team, Marvin Hall doesn’t. Whyte is gonna get some burn during the regular season, too. Seeing his agility has me pumped thinking about using him in plays using pre-snap jet motion principles. Holy shit hurry up and be September 5th already.

-Nice Fact of the Week: Ryan Nall has a 69 yard run in a preseason game for the second time in two years. Nice.

-Nick Kwiatkoski played great, and I’m warming up to the idea of looking at a second contract for him, but there is no way he should be a starting ILB in 2019. I’m also all in on the idea of Josh Woods as the last ILB to make the roster. Dude has range and makes plays all over the field.

-The entire WR corps played like garbage. I’m still holding out hope for that Riley Ridley hype train to pick me up, but I hope he can play some special teams while we wait.

-The Bears shouldn’t have any tight ends on the 53 man roster for the upcoming season because holy fuck the depth chart after Trey Burton is literally Adam Shaheen and a collection of future suburban Chicagoland gym teachers.

-Duke Shelley is an interesting prospect, but he is not ready for meaningful football on the main roster this upcoming season. He flashes once or twice a game, but he was getting beat all night in coverage and in Pagano’s more man-to-man system, he needs time to hone his technique.

The Bears play their preseason finale next Thursday, and in the meantime I’ll be watching King of the Ring 1998. Hopefully Marcus Mariota survives the game, because if he doesn’t the Chicago Bears of the 2019 preseason will be knocking QBs out of the league at an unheard of rate.