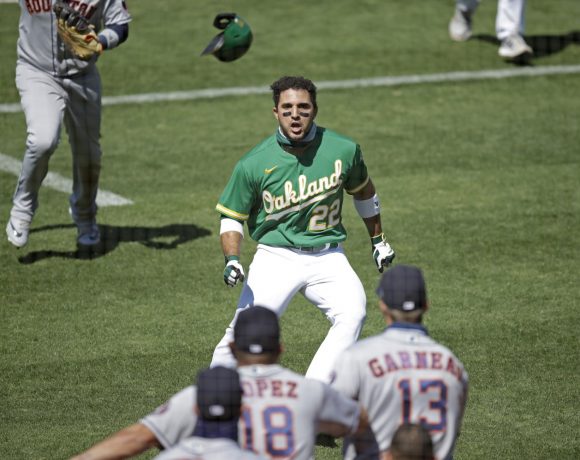 Now we move onto the other side of the ball, the offense of the Oakland A’s. Just looking at the surface stats of the A’s offense, you’d be inclined to think that this is a team that’s built to be opportunistic with opponent’s mistakes and then sit back and let their plus pitching shut the rest down. Well dear reader, you’d be exactly right.

The A’s don’t score runs in bunches, sitting exactly in the middle of the pack in runs scored with 274 of them. Comparatively, the top two teams (one of which happens to be the Sox) mashed in upwards of 30 more runs than Oakland did.

The A’s walk more, strike out less, and steal more bases than the Sox. They’re exactly the kind of team we used to despise in Minnesota in the early and middle 2000s, with one major difference this time: they don’t have their one big monster hitter now. Three weeks ago their all star 3rd baseman Matt Chapman came up lame after ranging to his left on a hot ground ball and attempting to make a spinning throw to first. An MRI after the game revealed a strained hip flexor, which required season ending surgery.

Not only was Chapman 2nd on the team with 10 HR at the time, but he also led the A’s in extra base hits. On top of that, he was by far and away the best defensive 3rd baseman in the AL, with Fangraphs having him at 34 DRS last season, with a 14.8 UZR rating.

This is a huge blow to the A’s on both the offensive and defensive side of the ball, and a disadvantage the Sox should hopefully be able to take advantage of in a shortened series. After Chapman, the primary drivers of the A’s offense are as follows:

On the surface, Canha doesn’t seem to be anything super special here (which you’ll start to see is a pattern). He doesn’t hit for a ton of power, doesn’t knock in a ton of RBIs. What he does do is get on base at a prodigious clip, as his .387 OBP is 15th in the entire league, just behind Mike Trout. He sees a ton of pitches, and forces opposing batteries to show all of their weapons in one plate appearance. He’s like a human video session of a pitcher’s strengths and weaknesses.

The A’s currently have him hitting cleanup, which seems out of place as you’d normally like to have someone of his skill set hitting 1st or 2nd, but Bob Melvin has made it work consistently throughout this bizarre season. The Sox staff will have to be aware of what he can do, and try and make short work of him when he comes to the plate.

OLD FRIEND ALERT. Here we have yet another former White Sox prospect in the sweet swinging Marcus Semien. Traded from the Sox in 2014 along with Chris Bassett for Jeff “Not Here Anymore” Samardzija, Semien quickly found a home at short here in the bay area. Last season was his coming out party, as he slashed .285/.396/.892 with 33 HR and 92 RBI. He also scored 121 runs atop the A’s lineup and swiped 10 bags.

While this season hasn’t come close to what he put up in 2019, he’s still a very large threat atop the A’s lineup. Usually leading off, Semien has power to all gaps, and can lay down a bunt and beat it out if the corners are playing too far back. While he only stole 4 bases this season, the speed and ability is still something pitchers need to take account of. Bob Melvin also loves to hit and run when Semien is on base, easily creating a 1st and 3rd situation before the opposing starter has even settled in.

Possibly the most intriguing young player on the diamond for the A’s is Ramon Laureano. Bursting onto the scene last year slashing .288/.340/.860 with 24 HR and 67 RBIs, Laureano’s mix of speed and power made the AL west sit up and take notice. Unfortunately for him, his season has kind of gone off the rails since his suspension back in early August after he attempted to fight the entire Astros team to get to slimy shitball hitting coach Alex Cintron. He then had the quote of the year by saying this about Cintron: “I regret charging him, because he is a loser.”

Despite his down numbers this year, Laureano is dangerous in any count and can put the ball on the ground and beat it out with his plus speed. In addition, if you hang a piece of cheese in the zone, he has the power to make you pay for it.

Sean Murphy has yet to experience a full major league season. Brought up as a September callup in 2019, he impressed the A’s front office by hitting 5 HR the rest of the way to go along with his 5 doubles. Brought along slowly in the A’s stocked minor league system, Murphy was always targeted as their catcher of the future. Thus far, the returns have been exactly what the A’s were hoping for.

Murphy thus far has shown an innate ability to hit for power, along with the patience that is the hallmark of the Oakland offensive system. The fact that he can hit for the power that he does while maintaining a .364 OBP speaks volumes to the kid’s eye. If he’s able to stay healthy behind the plate (he’s already missed time due to knee issues, which for a catcher is never a good thing), he should be the backbone of the A’s lineup along with Chapman for years to come.

As you can see above, the one tying link between all of those hitters is a sky-high OBP. This A’s team is maddeningly patient at the plate, and is completely willing to take a walk at the expense of pulling the trigger at a marginal pitch.

For the Sox rotation and bullpen to have success against the A’s offense, they need to stay within their game and throw strikes. Keep ahead of the A’s hitters in counts, and force them to make contact. There’s not a ton of pop there, but there IS an extremely high hitter’s IQ. Pound for pound, the A’s don’t match up to the sheer power the Sox can present, but they can drive a starter out of the game quickly if they start to nibble. Go right after them, and success can be had.

We’ve waited a long time for the Sox to reach the postseason, and there’s no reason they can’t make a lengthy run this year. The march starts now…