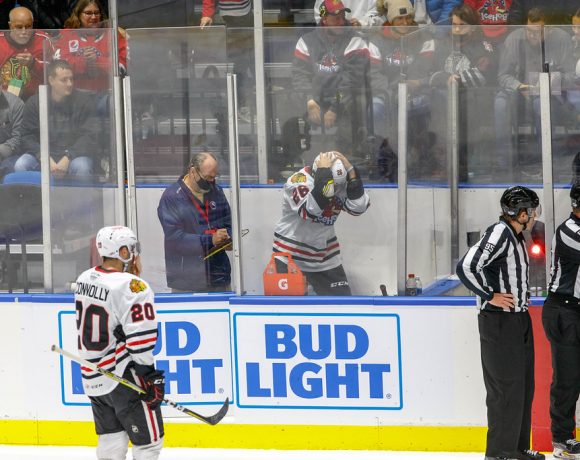 High On The Hog: A Matter Of Shots

The Rockford IceHogs have two major problems ten games into the 2021-22 campaign:

The piglets 3-6-1 record and status as cellar-dwellers in the AHL’s Western Conference can be easily explained with a look at the stat sheet. Rockford is badly outshot on a nightly basis and gives up tons of chances from close range.

The IceHogs are dead last in the league in both shots taken (21.50) and shots allowed (37.40) per game. Rockford is being outshot in the first period 134-68. When your opponent gets double the pucks to the net to open play, it’s easy to dig yourself into a hole.

Friday night, the Hogs took on the visiting Chicago Wolves, who were at the top of the AHL’s Central Division entering the contest. Rockford mustered a single shot on goal midway through the opening frame-Brett Connolly’s offering from the outside of the right circle.

Chicago, on the other hand, went up 3-0 after peppering rookie goalie Arvid Soderblom with 16 shots. The IceHogs skated to the locker room to a chorus of boos.

Rockford is 1-3 four games into a five-game home stand. They are off until this weekend, when they have a home-and-away with the same Wolves who spanked them so thoroughly Friday night.

The IceHogs have many contracted players with the Fuel…how are they faring?

Well, the Fuel finished a five-game road trip Sunday. Indy was 0-4-0-1 on the jaunt, which concluded with a 7-4 loss to Toledo. The Fuel are 2-6-0-1 overall and in the basement of the ECHL’s Central Division.

Chad Yetman leads Indy in scoring with nine points (3 G, 6 A). Riley McKay (2 G, 3 A) and Liam Folkes (3 G, 1 A) are also contributors for the Fuel in the early going. Kale Howarth, who began the season with an injury, had a pair of goals Sunday in the loss. Watson (3 A in four games and Jacob Leguerrier (one goal in six games) are Rockford contracts on the blueline.

Cale Morris has seen the bulk of the work in net, appearing in seven of Indy’s nine games. He is currently 1-3-0-1, with a 2.97 GAA and an .894 save percentage. Tom Aubrun, in his first start of the season, gave up seven goals in a 7-2 loss to Kalamazoo Saturday night.

(Note: How’s this for a fun road weekend? Indy was in Coralville Friday night, losing 5-3 to the Iowa Heartlanders. Then, they drove six-plus hours to Kalamazoo to get blown out by the Wings Saturday. Then, a couple of hours east to lose to the Walleye. Ouch.)

The IceHogs were seconds away from their first winning streak of the 2021-22 season Wednesday night. Unfortunately for Rockford, the Wild rallied to force Gus Macker Time, then handed the Hogs a tough loss.

Iowa scored first, getting a Dakota Mermis goal 11:15 into the game. However, the IceHogs special teams put Rockford in the lead heading into the intermission.

Brett Connolly one-timed a Josiah Slavin pass from the slot to convert on the man advantage at 15:15 of the first period. Two minutes later, Connolly started a shorthanded rush up the ice with Carson Gicewicz in the box for slashing. Ian Mitchell and Slavin reached Wild goalie Dereck Baribeau with no defender in front of them. Slavin’s third goal of the season had the Hogs up 2-1 at the break.

The Wild evened the score on Connor Dewar’s goal 3:21 into the second stanza. The score remained tied until Wyatt Kalynuk sent a slap shot from the left point 8:12 into the third. Rockford limited the Iowa offense for most of the final frame until Wild coach Tim Army brought Baribeau to the bench in favor of an extra skater.

Hogs goaltender Malcolm Subban was able to keep shots by Mason Shaw and Swaney out of the net as the final minute ticked away. However, Swaney was able to put back his own rebound past Subban with 26 seconds left to set up overtime.

With Connelly in the box for tripping, Joe Hicketts sent home the game-winner with the Wild on a 4-on-3 power play 3:53 into the extra session. Subban was a hard-luck loser, stopping 39 Iowa shots as the IceHogs were outshot 43-21.

The win put a damper on the performance of veteran Connolly, who had a three-point (1 G, 2 A) effort spoiled by Iowa’s late heroics.

The Wolves opened up a three-goal lead on the overmatched Hogs, who were never in the game.

The beating commenced from the opening faceoff. The Wolves scored 49 seconds into the contest, taking a 1-0 after Andrew Poturalski nabbed a backhand pass from Stefan Noesen and got behind a stick-less Wyatt Kalynuk. Poturalski easily maneuvered the puck past Hogs goalie Arvid Soderblom to open the scoring.

Chicago wasn’t finished in the opening period. Noesen got in on the goal-scoring at the eleven-minute mark, redirecting a Max Lejoie shot from the point past Soderblom while on the man advantage. A long shot by Eric Gelinas caught twine 17: 05 into the first period, sending the IceHogs to the locker room down three 3-0.

It was largely academic for the final 40 minutes.  The IceHogs, who were out shot 16-1 in the first period, couldn’t get much going. For the night, Chicago sent 34 pucks to the net. The IceHogs finished with 19 shots on goal.

Rockford’s Brett Connolly pushed his scoring streak to five games, sending a wrist shot from the right circle past Chicago goalie Eetu Makiniemi to spoil the shutout bid. Kalynuk and Josiah Slavin assisted on the power play strike at 16:31 of the third period, making it 3-1 Wolves. Chicago closed out the scoring with an empty net goal by Maxim Letunov.