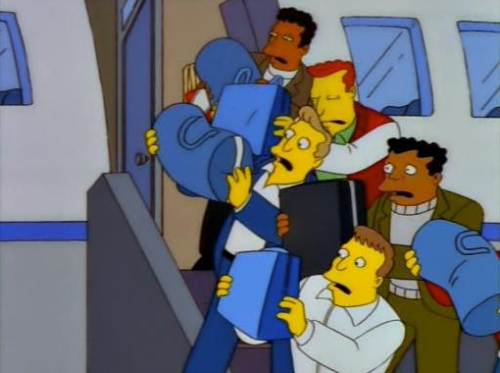 Ever been all excited for a vacation and then while you’re there everything goes wrong? You get sick, or the hot water heater breaks, or your wallet gets stolen, or all three? Well, that’s pretty much what the Western Canada trip has been for the Hawks, who come home with no points and instead have lost five straight. This is a bit of a truncated wrap because, c’mon guys it’s early!

– The Hawks played basically the whole game without Duncan Keith because he mashed Dube’s head into the top of the boards and got a game misconduct within the first minute. However, it wasn’t malicious and wasn’t even a hit from behind (Dube saw him coming and braced for it, but their positioning and bad luck led to his head getting pushed into the boards). I’m not going to complain about it because I kinda appreciate the refs enforcing the letter of the law, even on an elite defenseman. I bitch and moan when they aren’t consistent with punishing the types of plays that lead to head injuries since without that, the behavior of oafs won’t change. Should it happen because of an accident or bad luck, oh well. And while of course I’m pissed about the outcome of the game, it’s the Hawks’ fault for not being able to hold onto a lead, which they had established well after Keith was out of the game, and not the refs’ fault for doing their jobs.

– About that blown lead…the Hawks were up 3-2 at the start of the third period but stupid Matthew Tkachuk scored to bring them within one just before the end of the second, which had an ominous feel. And indeed, Sean Monohan tied it up about midway through the period, and Michael Frolik gave them the lead in just another minute or so (et tu, Frolik?). Again, the Hawks have no one to blame but themselves. Crawford faced 41 total shots, and the Flames are fast as fuck. They were aggressive in the third and kept generating chances. Would things have worked out better if Keith was in? Most likely yes. But for the team to give up that many shots you can’t really pin it on the absence of one guy. The Hawks are currently tied for 8th-worst in the league in shots given up (averaging 33.5 per game), and none of this is going to get better if that shit doesn’t get better.

– Relatedly, Crawford did the very best he could. I know I’m a fluffer for Crow, and Tkachuk’s goal was sort of a miss for him (but it was incredibly precise placement over his shoulder, so whatever), but again I don’t think this loss gets pinned on him. The fifth goal was an empty net so he actually ended the night with a .900 SV%. Granted that’s not good enough (obviously), but shit, facing over 40 shots, what the hell is he supposed to do?

– Hey, Jonathan Toews got his 300th goal! Way to make a cool milestone mean absolutely nothing, guys. Also, Brandon Saad scored, so that’s nice. And DeBrincat ended a scoring drought with an assist. Jan Rutta also scored but fuck him, I don’t care. All those things are nice, but the Hawks managed a measly 15 shots on goal, and as I mentioned gave up nearly three times as many. Woof.

The other night I said it’d be a long plane ride back if they didn’t get any points, and while I generally love being right, in this case it kinda sucks. Hopefully Quenneville is feeling nervous because fuck him too, I don’t care. So here they are with their tail between their legs and a few days to think about what they did before they play Carolina on Thursday. Onward and upward.