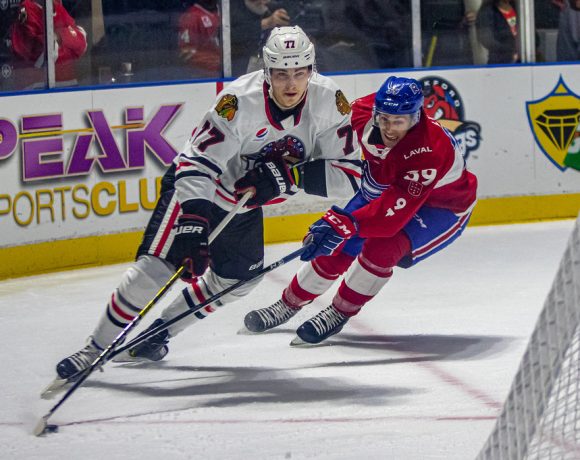 The Rockford IceHogs have gone 0-3 to open up their 2019-20 season. This is the first time a Rockford club has started its AHL season with three consecutive losses. What isn’t new, however, is the manner in which the piglets have been losing.

It starts with putting the puck in opposing nets. The Hogs just haven’t been doing enough of it.

Rockford dropped the home opener 4-2 to Grand Rapids on Saturday night. Two days later, in a matinee performance at the BMO Harris Bank Center, the IceHogs fell to Laval 3-1.

The Hogs have not converted any of their ten power plays so far this season. They’ve been out shot in every game; Laval, who was 0-3 entering Monday buried Rockford to the tune of 43-22. Philip Holm struck cord from the slot in the first period off a drop pass from the stick of Jacob Nilsson.

Unfortunately, that was the high-water mark of the day for Rockford. The Rocket scored twice in the second period and limited the IceHogs to five shots on goal in the third.

Rockford also drew first blood on Saturday, with Anton Wedin potting his first goal of the season. Wedin banged in a long rebound of a Nilsson shot 7:24 of the opening frame. The Griffins scored the next three goals to take control of the game.

Dylan Sikura sent a laser past Grand Rapids rookie goalie Filip Larsson to close the gap to one midway through the game, but the Griffins tallied late in the second for the final margin of victory. The Hogs went with six skaters for most of the final five minutes of action only to come up empty.

What’s Up With Dach

Rockford fans got an unexpected look at Chicago’s 2019 first-round selection in the NHL Draft. Kirby Dach is still too young to be a full-time AHL player, but a loophole in the AHL/CHL agreement allowed the Blackhawks to send the 18-year-old Dach to Rockford for a two-week conditioning assignment.

Dach skated both games this weekend. Aside from the opening minutes Saturday night, where I thought he looked a wee bit tentative, he was a pretty solid citizen out there. He skated really well, fore checked hard and wasn’t afraid to get to the front of the net.

Despite not recording a point Saturday or Monday, Dach looked like he was handling the pace of play just fine. Will he remain in Rockford long enough to record his first professional points? That remains to be seen.

The IceHogs have a home-and-home weekend with the Chicago Wolves coming up. The Hawks could leave Dach in the Rock up until October 25, when the Hogs visit Cleveland. If I interpret the rule book correctly, Dach could play five games in the AHL and still be eligible to skate up to nine games with Chicago before he would need to be sent back to juniors.

Perhaps management takes advantage of this to get him a few more pro games under his belt. We’ll keep an eye on the transaction wire to see what develops.

In another roster move on Saturday, Rockford recalled defenseman Jack Ramsey from the ECHL’s Indy Fuel. This gives the IceHogs eight blueliners on the roster.

A Delia Kind Of Weekend

Collin Delia was in net for both games, with Matt Tomkins backing him up. Kevin Lankinen had the weekend off for whatever reason.

Delia was better Monday than he was on Saturday, but was solid in both of his first two appearances this season. Tomkins would be better served getting time in the Fuel net; unless Lankinen is injured, I would expect Tomkins to be sent to Indy by the end of the week.

Gazing At The Stat Sheet

John Quenneville, who was sent to Rockford last week, skated both games the weekend for his first action of the season.

Tim Soderlund made his Hogs debut on Monday, though he did not dent the scoresheet. The same went for Nick Moutrey, who made his first appearance of the campaign on Saturday.

Here’s what you need to know about the Chicago Wolves:

I’ll be back next Monday to recap Wolves weekend and all the fun it should entail. Until then, follow me @JonFromi on twitter for thoughts on the IceHogs throughout the season.