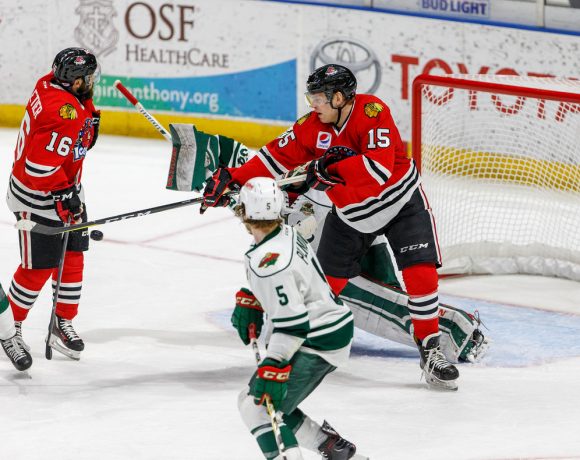 High On The Hog: Keep Pushin’

The Rockford IceHogs, AHL affiliate to the Chicago Blackhawks, have put together a pretty decent point-streak in their last few games. The question is whether or not it will be enough to extend their 2017-18 season.

Rockford has four wins over the course of a six-game point streak. Two of their wins in that span came against the Chicago Wolves, one of the leagues best teams the second half of the campaign. However, the Hogs still sit in fifth place in the Central Division, one spot out of the playoffs.

What the IceHogs need right now is regulation wins against key division opponents. This past week afforded just that opportunity. Rockford had games with Iowa and Grand Rapids, the two teams currently ahead of them in the standings.

Rockford beat the Wild 3-2 at the BMO Harris Bank center Tuesday and dropped a 4-3 decision to the Griffins at Van Andel Arena. Not bad, but not good enough. Both games were decided in overtime.

Clean regulation wins in those two games would have leapfrogged the Hogs over Grand Rapids and into fourth place. Rockford is still very much in the hunt for a postseason berth. They do have two more games with the Wild this season, including Monday’s tilt in DesMoines. With just 12 games left on the schedule, though, there is no margin of error.

On Saturday, the IceHogs recalled forward Alex Wideman from the Indy Fuel. Sunday, Rockford added forward Kyle Maksimovich, who was signed to an amateur tryout.

Maksimovich comes from the junior ranks; he served as captain of his team, the Erie Otters. This season, Maksimovich totaled 66 points (31 G, 35 A).

We’ll have to see if the 20-year-old will get playing time with Rockford making a bid to reach the postseason. With the roster a bit thin at forward, it’s a possibility.

As of Monday, Rockford sit fifth in the Central Division. They are a single point behind Grand Rapids in the standings. Iowa is still within reach, more so if the Hogs can get two points at Wells Fargo Arena tonight.

Annual work commitments keep me out of both the BMO and my basement at this point in the Hogs schedule. Here’s a brief recap of how the week went for Rockford.

The IceHogs sent 47 shots to the Wild net in regulation; just two found the back of it. However, Rockford showed that never-say-die attitude we’ve seen throughout the season, rallying from a goal down in the third period.

Henrik Samuelsson evened things up in the 15th minute of the third, knocking in a rebound of Cody Franson’s shot. The Hogs won in Gus Macker Time when Andreas Martinsen redirected another Franson offering. Collin Delia picked up the win, stopping 33 of 35 shots.

Rockford came back twice in this contest. The Hogs got off the deck after falling behind 2-0, thanks to a pair of goals by Viktor Svedberg. Rockford fell behind after a Ben Street power play goal in the third period, but got an equalizer on a Luke Johnson tip-in with 41 seconds to play.

The extra point went the way of the Griffins, as Eric Tangradi swiped a puck from Anthony Louis, skated to the slot and fired past the blocker of Collin Delia.

Brandon Pirri got the Wolves up 1-0 4:25 into the game, but the Hogs prevailed at Allstate Arena for the second time in six days.

The first of three unanswered goals was scored on the power play by Matheson Iacopelli. The rookie forward snapped a laser from the high slot after being set up by Henrik Samuelsson late in the second period.

A Wolves miscue while on the man advantage gave Tyler Sikura a breakaway chance early in the third. Sikura beat a sliding Oscar Dansk to a loose puck that had slid into the Wolves zone. Guiding the biscuit into the vacated basket, the shorthanded tally put the Hogs up 2-1 4:11 into the third.

Anthony Louis got open in the slot a couple of minutes later, taking a pass from Chris DiDomenico and firing past Dansk for a 3-1 Rockford lead 6:30 into the final frame.

Chicago managed to close the gap with a Jake Bischoff goal, but the Hogs hung on for another big division win over the Wolves. Jeff Glass got the win, stopping 27 of the 29 shots he faced.

Another pivotal week of divisional play looms for Rockford, starting tonight in DesMoines. Beating Iowa in regulation would send them past idle Grand Rapids and right behind the Wild for third place in the Central.

The last Hogs home stand of the season is a two-game affair. The action begins Friday night against Milwaukee. The following night, the Wolves visit the BMO.

I hope to be sending out thoughts during tonight’s game in Iowa. Follow me @JonFromi on twitter for IceHogs musings all season long.