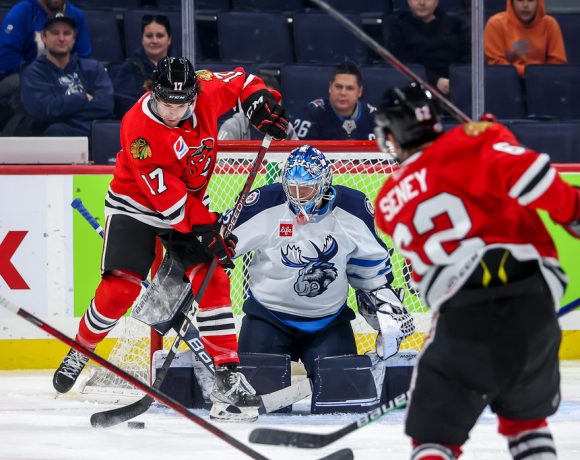 High On The Hog: Back To The BMO Center

The Rockford IceHogs will be opening their home schedule this weekend, hosting the Chicago Wolves Saturday night and the Manitoba Moose Sunday afternoon. They’ll be doing this at the BMO Center-formally known as the Rockford Metro Centre and the BMO Harris Bank Center.

It’s the same old BMO. Except that it isn’t.

There is much to marvel at as the new-look IceHogs roster settles into their home digs. Rockford’s sweaters now feature an updated logo, though not the new team logo that debuted back in the summer. Adorning the front of the sweater is Hamilton E. Hog, otherwise known as Hammy.

The folks in design have exorcised the “Rockford IceHogs” part of the logo and also taken the stick out of Hammy’s mouth. They did not, however, close Hammy’s stickless mouth.

Hammy has apparently been hitting the weights this summer, part of what will surely be a rebranding of sorts for the long-time Rockford mascot. Why is the face on the sweater the pre-health-conscious Hammy? Is the new scoreboard as awesome as has been foretold? Did they fix the towel dispensers in the restrooms? Will we ever see the vaunted Illinois Lottery Cup again, or did the Wolves lose it in Rosemont?

Oh…and we get to see how the veteran-laden Hogs fare against the defending Calder Cup Champions. The Wolves roster has been depleted of many of the key names that helped hoist the cup, including David Gust, who had three points (1 G, 2 A) for Rockford last weekend.

Six of Chicago’s top-seven scorers last season are with other clubs. Jack Drury (20 G, 32 A) is the lone holdover. Newcomers include veteran forward and Wheaton native Ryan Dzingel, who has a couple of 20-goal seasons with Ottawa and will provide offense for Chicago. Former Blackhawks forward Brenden Perlini also signed a PTO with the Wolves.

Max Lajoie (4 G 29 A) is back as a key piece of the Chicago blueline. Vying for playing time are several Carolina Hurricanes prospects and 37 -year-old Jason Garrison, who is also signed to a PTO.

Goalie Pyotr Kochetkov was very impressive for the Wolves down the stretch when he wasn’t stopping pucks for Carolina. His play in net may cover some of the departures in the Chicago roster.

The Wolves tangle with Manitoba Friday night heading into their first meeting with the piglets, for what it is worth. Will Rockford take advantage of fresh legs, or will there be jitters as they hit the BMO ice for the first time this season?

Aside from a four-goal explosion in the third period of the season opener October 15, the IceHogs have failed to make an impact on offense through their first two games. I would expect that to change, as the skill-level on offense should keep scoring droughts to a minimum. I’m going to stick my neck out and look for Rockford to drop a big number on one or both of their weekend opposition.

On Monday, the Blackhawks assigned D Alex Vlasic to Rockford. The Hogs also recalled D Andrew Perrott and G Dylan Wells from Indy for the week, then sent both down to the Fuel along with D Koletrane Wilson on Thursday.

F Cole Guttman left Saturday’s game in Manitoba in the third period after taking a fall and struggling to get the the Rockford bench. The IceHogs were pretty consistent with medical updates last season, but haven’t commented on Guttman’s status for this weekend.