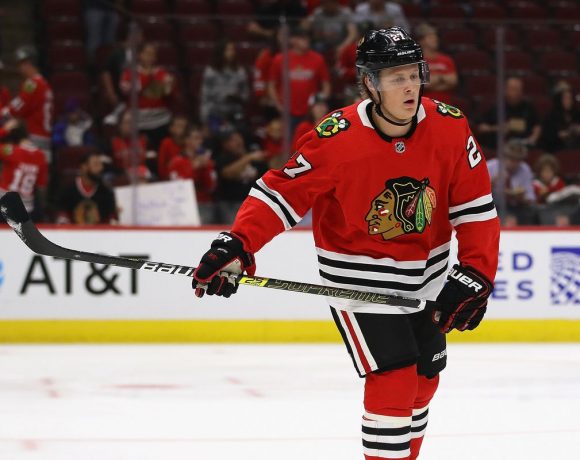 I should state right at the top that I’m not much one for confrontation either, and have spent a lifetime running from my problems. So to say I understand where the Hawks are coming from would be putting it lightly.

The Hawks have taken seven of the last eight points. They just got their first win over Vegas. They seem to have found a balance with what their coach wants and what the players want. They’re scoring, the goalies are playing spectacularly. They’re back to .500 and there’s at least a glimmer of hope that they could springboard from here into at least making the season interesting. It’s easy to understand why the Hawks don’t really want to be rocking the boat right now.

With that in mind, they sent Adam Boqvist back to Rockford this morning. Which means Connor Murphy is ready to go on Saturday in Nashville, for another impressive 11 minutes before something else on him goes TWANG! All makes sense. But the hard conversation is coming for the front office, so they might as well have it now.

We talked about this on the podcast, but this week is another chance to have a sit-down with Brent Seabrook. Because the clock is ticking very loudly and the Hawks have run out of ways to avoid it now. No later then next summer they’re going to have to do this, and if they are in a playoff chase (which they aren’t yet) it’s probably coming sooner. So why not get ahead of it?

Have Stan and Colliton and McDonough meet with him in Nashville or wherever the next two days, and calmly explain that they can’t keep Boqvist in Rockford forever, and it’s about winning games and he helps us do that. Again, make it clear how much Seabrook has meant to the organization and his teammates and fans. You’ve already prepared the ground a little by his double-scratching, which they handled poorly (even if it was the right decision at the base of it). Tell him this is where he is, this is where the team is going, and if that works for him or not. Assure him you’ll try and accommodate him if it doesn’t, but he should also know that a trade is hardly a guarantee given the factors involved. Just keep him informed and feeling like he has some control of the situation.

We know what Seabrook’s voice means in the dressing room, and they don’t want to lose that. But the players also want to win and get back into the playoffs. Adam Boqvist helps that cause. He helps it more than Brent Seabrook does. And though they’ll never say it out loud, the players know that too.

Sure, you could duck out of it and start scratching Olli Maatta whenever Boqvist returns. If it was good enough for the Penguins and all that. Doesn’t seem like the way this is trending.

And as we’ve said, this is coming. Even if you say that Boqvist will take Gustafsson’s spot after Gus leaves in free agency or is traded, whither Ian Mitchell? Or Nicholad Beaudin or Chad Krys if they pop up into the frame? This is precisely why you don’t trade for vets with multiple years left on their deals when you’re trying to pivot to younger d-men, but this is the bind you’ve put yourself in.

You can only put it off for so long, and everyone would be healthier if you start dealing with it now. What if Boqvist spends the next two weeks or month simply lighting up the AHL while Seabrook continues to gasp for air? And if the power play goes stale? And the record never really gets far away from .500 in either direction?

There will only be one answer. Best to start preparing for it now.