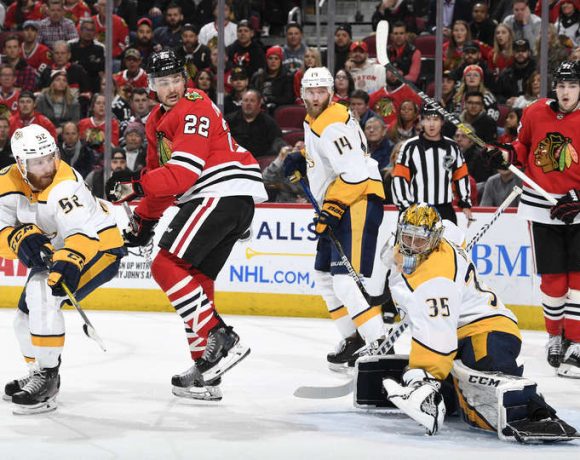 It was a game they had to win, so of course they lost. I don’t want to hear anything from the organ-I-zation about how there’s a lot of hockey left, and there’s still half a season to go. Fuck that noise. If they actually wanted to do anything about the playoffs then literally every game from here on out matters, and their record needs to be absurdly good to have a chance. Instead we get absurdly bad shit like this one, where a first period in which the Hawks completely shat the bed was enough to sink the entire night. And then to really give us the finger, Pekka fucking Rinne scores a goal. You read that right. Let’s get through it:

–So as mentioned, in the first the Hawks were disjointed, messy and seemingly confused about what they were supposed to do and where they were supposed to be. And I don’t mean that in the existential sense of, “oh they suck at hockey,” although a lot of tonight’s roster certainly does. I mean it quite literally, in that there were defensive breakdowns everywhere and guys just looking at each other not knowing what to do. What’s really bizarre is they were barely beaten in shots in that period (12-10), and they led in possession at 5-v-5 (55 CF%, lots of 5s right there). This may lead you to say that it was Corey Crawford‘s fault, and I can assure it wasn’t, although I would have liked to have seen his glove side a little tighter. On the second goal, Adam Boqvist just got out-muscled and that’s the one Crawford needed to stop, but it’s not exactly his fault that his diminutive defenseman got drop kicked by an oaf, and said oaf was then left completely alone just above the crease. John Quenneville also demonstrated why he’s completely useless on Matt Duchene‘s goal, where he basically just watched the puck go by him like a spun Phish fan watching a glowstick (trust me, I know). All the way around it was exactly the opposite of what the Hawks needed to do.

–To cap off that terrible period, the Hawks took yet another too many men penalty, which I could have sworn was their 15th of the year. Mark Lazarus on Twitter had the actual data and it’s in fact 7 total for the Hawks, which isn’t worst in the league as I snarkily opined, but it’s the 3rd such penalty in basically the last week. I can’t think of anything that sums up poor coaching and a tuned-out team better than that. I get it, math is hard, but even I can count to 5.

–There are plenty of issues with personnel on this team, which have only been exacerbated by injuries, meaning there isn’t a huge pool of talent to work with right now. However, that makes decent coaching and decision-making even more important, and again Colliton isn’t even close to getting a passing grade. For example, why is John Quenneville on the top line? One could ask why he’s playing at all, while Dylan Sikura sits in the press box (and I will ask that–why the fuck is Sikura in the press box? Did he run over Colliton’s dog or something? It’s ridiculous at this point). For god’s sake Quenneville was on the power play–what does that tell you about where this team is at?

Another example: if you’re missing key players and working with less, why put two of your best centers on the same line? Having David Kampf on a wing is just foolish, since he’s the best defensive center they have, and Kirby Dach can hold his own as the 2C no problem. And if you’re not going to put Toews and Kane on a line, even though all logic says they should play with Kubalik, then at least get Patrick Kane OFF THE FUCKING THIRD LINE where he’s centered by Ryan Carpenter who is OK but not actually good, and Alex Nylander who can’t pass, shoot or do anything that plays to Kane’s strengths (or anyone else’s, for that matter). For what it’s worth, Kubalik-Toews-Kane did finally get a look in the later stages of the game (and had an 83 CF%, by the way), but the fact it took nearly the whole game, and the fact that they still only got under 5 minutes of ice time together when it was woefully obvious his first concoctions weren’t working, shows how clueless Colliton really is.

–So what did work? Well, for one, Dominik Kubalik. His goal was off a beautiful wrister and he was showing off his speed, which we know is a rare thing around here. He finished the night with an 58 CF% at evens, yet remains Colliton’s most hated player aside from Dylan Sikura. Alex DeBrincat scored on the power play, so that was nice too.

–And to be honest, the Hawks played better in the third period. I would hesitate to say “well” because they fucked up about three odd-man rushes that should have resulted in at least one goal. However, they certainly made a game of it and piled up 14 shots in the third, but this is also what’s maddening about this team. Flip the first and third periods and the outcome may have been different. It’s definitely a give-a-shit meter thing, but also the general confusion and poor coaching mixed with the lack of enough good players. Quite a situation.

–And ‘Ole Shit Hip not only gets the win, he got a fucking goal. What a time to be alive. Yes it was an empty netter, but still…

The game was closer than the score, but in the end it doesn’t matter. They had to have two points here and couldn’t even keep it even. I can only hope that every one of these types of losses brings Jeremy Colliton‘s tenure closer to its end. Onward…

Line of the Night: “Zack Smith needs help from Olli Maatta.” –What you hear from the broadcast when your team is composed of bad players.