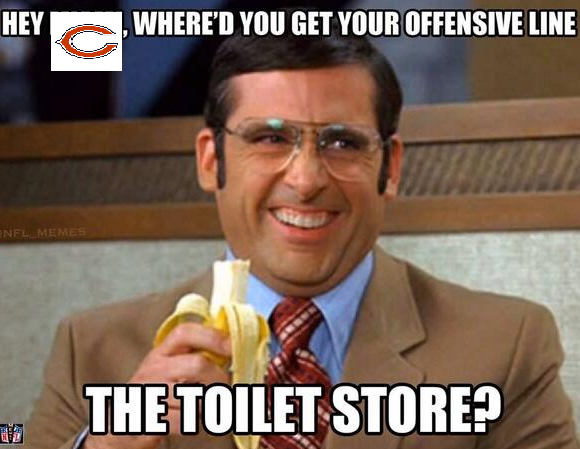 There is no other position on the football field that is judged more by the eye test and the offensive line. The QB was sacked from the left? Blame the left tackle. The inside run was stuffed out? Blame the guards. The center got called for holding? He sucks, bring in a new center. It’s a meathead’s paradise and we are all guilty of doing it.

Thankfully, offensive line statistics are available and provide us with actual proof that our eyes are not entirely tricking us into thinking someone sucks – they often do.

It’s not a surprise that the 2019 Chicago Bears O-Line was bad. Both visually to any fan of the team, and through the following stats that up the garbage up front.

When Rushing To The Left Side

When Rushing Up The Middle

When Rushing To The Right Side

In taking a macro look into these numbers, you can see the 2019 Bears O-Line had the most trouble getting production from the center and both guard positions. James Daniels, Cody Whitehair, and Rashaad Coward are responsible for most of the damage, with Kyle Long and Ted Larsen also taking a portion of the blame.

James Daniels was a 2nd round pick from Iowa. This season was his 2nd with the Bears and I’m pretty sure this is yet another early pick by Ryan Pace that has yet to live up to the expectations set by being the 39th pick in the draft. Everyone likes to say that these young guys need experience, and that is true sometimes, but you expect a 2nd round pick to come in, play immediately, and improve dramatically in his second season. I am not sure we saw that improvement from Daniels.

Cody Whitehair is fine. He is Bears good, which makes him just OK on most other teams. His ability to play both guard positions is valuable as is his durability since 2016. Unbelievably, Whitehair had played in 99% of the team’s offensive snaps since becoming a Bear. Whitehair is a reliable guy who you can build an O-Line off of. Aside from Eddie Jackson, Whitehair has been the best Bears draft pick during the Pace regime.

If the Bears want improved play from the front-five, then Rashaad Coward is a guy who has to go. When you have a QB who needs time to get through his progressions, Coward is the last person you want protecting him. At best, he is a journeyman lineman who would be best serving as a 7th lineman that can play guard or tackle.

A year ago, Charles Leno was coming off a season in which he played in 99% of the team’s offensive snaps and did not commit single penalty. Fast forward a year later and Leno, who played the same amount of snaps as last year, committed 12 penalties. 12. With one more year remaining on a $38M contract, 2020 is a huge season for Leno, but only if he will be back with the club.

After a career in which he has played in every game from 2014-2018, Bobby Massie has gotten old quickly. Massie played his 7th season in 2019 and managed 10 starts. I believe Massie will be back against next, but this is due more to his pass protection than his run blocking. The tackle was called for only two penalties in 2019, which, as you know, was 10 fewer than his bookend tackle Charles Leno.