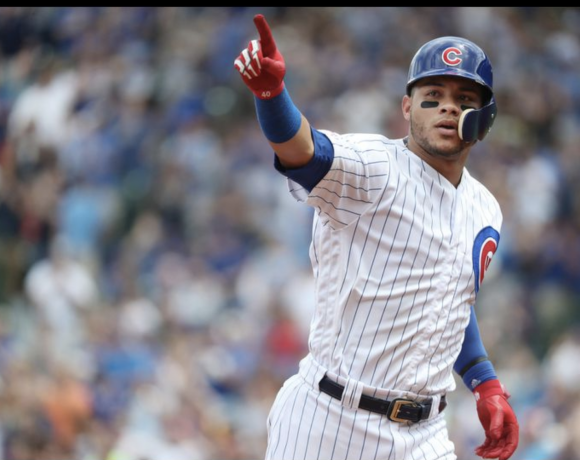 That’s about as perfect of a start out of the All-Star Break as you could have asked for, aside from one Pedro Strop two-seamer that still hasn’t landed. And even that didn’t end up mattering. Three quality starts. A lot of offense, from a lot of places. Kris Bryant binge. Other than Strop, clean enough work from the pen. No dumbass mistakes. And suddenly, just like that the Cubs have some breathing space atop the NL Central. Nice how that works, eh? Let’s run it through.

-Let’s start with the only bad aspect, and that’s Strop. At least he didn’t give up a wall-scraper. Strop’s velocity on his four-seam is down this year, significantly. FanGraphs has it nearly two MPH, BrooksBaseball has it at about one MPH and a half slower. Which has led to Strop trying to use a cutter or two-seam, and a splitter more. You see the results. Everything but the slider is getting tagged right now, and the way the two-seamer to Marte leaked up and in just like it did to Eloy is concerning. Strop can’t throw all slider, though maybe he should think about just doing it mostly. In ’15 and ’16 he threw it nearly half the time. What do we have to lose here?

In a perfect world, Carl Edwards would just come back from his rehab, you’d stick him in that slot and let Strop work things out in lower leverage spots for a while. But this is Carl Edwards we’re talking about here. He’s always looking for an excuse to fold in on himself like a flan in a cupboard. Still need answers out there.

-To their credit, you would have been forgiven if you thought Strop’s chum to Marte would signal another one that would get away. Instead, the Cubs locked down for once, just got another run immediately and closed it out. And they did it with timely baserunning and hitting, with Bryant knowing exactly where the outfielders were and getting a great jump on Heyward’s single. That’s a team a little more locked in, though Bryant was never really at the center of those problems.

-Look, Yu Darvish’s splitter was back, thrown about 10 times on Friday and got whiffs on 75 percent of them. He used his slider more, though I think his slider and cutter are probably the same pitch and it’s just how he accentuates it. The 36 sliders he threw were the most since that start against the Marlins where he couldn’t find the 5th. Hopefully he’s unlocked something here.

-Contreras’s homer in Saturday’s 1st inning is almost certainly the result of the ball. He didn’t get full extension on it, seemed to even get under it a touch, and sliced it into the third row. But hey, who’s complaining?

-Jason Heyward with six hits, two game-winners on the weekend, and an .833 OPS. Thanks much.

-I don’t know if Robel Garcia is any good. I know it’s worth finding out. And I’m not sure Nick Castellanos is that much of an answer, though he should at least be cheap.

-Just enough change-ups from Quintana today to keep the Pirates off balance. He got a bit Fiendish Kung Fu Treachery’d in the third, but settled down the rest of it. Again, quality starts is all this team really should require.

-It worked out, but I’m still furious about Joe actually thinking a Rosario-Bell matchup on Friday was a good idea, because the fury helps to plug the hole within me.

-Given what Caratini has provided and there’s been no need to burn Contreras, I would expect Willy to have a huge August and September.