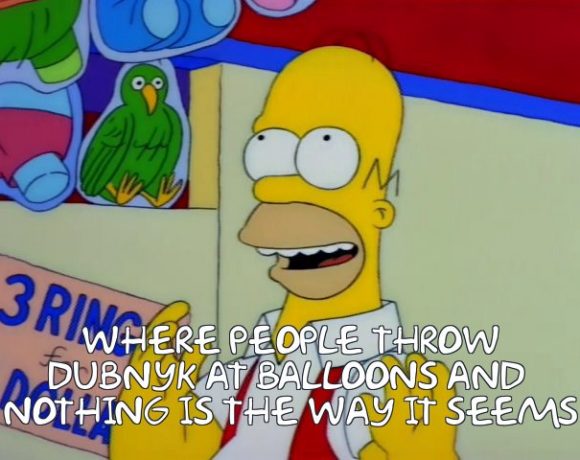 Game #53 – Hawks vs. Wild Spotlight: Ducks At Balloons And Nothing Is The Way It Seems

We’ve had a good bit of fun at the expense of Bruce Boudreau through the years. It’s probably not fair that some of that is due to him looking like he should be holding the princess hostage while waiting for Mario to come save her. But his constant thrashings-about in the playoffs and in the press have always been good for a chuckle. And while the regular season record is marvelous, the playoff record is clear to see. One conference final appearance. That’s it. A flush of blown 3-2 leads and Game 7 losses at home with Anaheim and Washington. He is the yin and the yang of NHL coaching, all while looking a bit like the Buddha.

And what we used to marvel at with Gabby was that he got the results despite having no structure whatsoever to his team. His teams played harder than anyone in February and March when most teams are running short on fucks to give, and by the time the playoffs came around his players were toast and suddenly opponents cared again and actually had a plan. Boudreau’s “Go Get ‘Em, Scouts!” approach didn’t work once it was spring.

Except that’s not how it works anymore. And the Wild would do well to recognize what they are to create the flexibility they need.

The Wild are the best defensive team in the league. Not in terms of goals allowed, but in terms of chances. They have by far the best expected-goals against per 60, at 1.97. The next best is Boston at 2.04. And this is the second year in a row they’ve been among the best. They give up the second-least amount of shots at even-strength as well, and are in the top-10 in attempts. They don’t create a whole lot, but they shouldn’t have to given they surrender next to nothing.

The thought around the Wild has been they go as far as Devan Dubnyk will take them, but that’s not necessarily true. Dubnyk has the highest expected-save-percentage in the league. Which means as far as starting NHL goalies go, he’s got the easiest job, or at least asked to do the least. And yet his actual save-percentage, at even-strength, hasn’t been anywhere near what it should be. He’s running the third-lowest difference in expected and actual save-percentage in the league, behind Roberto Luongo and Martin Jones. The Panthers haven’t been able to overcome that. The Sharks are so talented they can, but if it goes balls-up in the playoffs, you’ll know why.

The biggest problem for the Wild is that they don’t have enough, or maybe any, genuine top-line talent. Mikael Granlund, Zach Parise these days, Charlie Coyle if you squint…these are all second-line players at best. Eric Staal was a top-line player last year, but is not this year, and is headed for free agency anyway. The Wild don’t have a ton of cap space, and Artemi Panarin isn’t going to go there anywhere due to a lack of beaches.

The Wild have about $15M in space for next year, with only really Staal’s space to fill. They can get more space by trading Dubnyk. It’ll be poison to some ears in Minnehaha to hear that, but if the Wild are going to be this good defensively, and he’s going to drag that far behind what he should be doing, then the Wild can do better than him, and probably at a cheaper rate. At age 33 in May, he’s unlikely to get better. And given how slow NHL GMs are on the uptake, the Wild can free themselves of his $4.3M hit pretty easily, especially to any team that has a playoff flameout due to goaltending (Toronto we’re looking at you, and maybe San Jose as well). Dubnyk still carries a name, as multiple Vezina finalists do.

Maybe the Wild could use that money to upgrade at goalie, never give up a goal, and give themselves more than a pubic hair’s margin at the other end. Maybe it frees them to get a Mark Stone or Matt Duchene, or both, which they need. They can’t rebuild with this roster, and they need to get creative to maximize their shrinking window to get up amongst Winnipeg and Nashville. They’ll have to get creative, and this is one way.