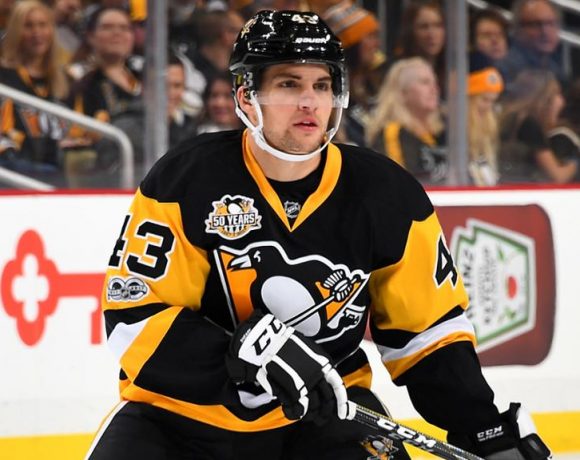 Game #20 – Hawks vs. Penguins: Spotlight – Conor Sheary, The Power Of Sid, And The Proper Way To Reload

The cynical way to approach it would be to joke that if Conor Sheary had come up through the Hawks’ system, they would have already traded him to make room for Artem Anisimov’s or Brent Seabrook’s extension. That’s how the Penguins ended up with two straight banners seven years after their first one with Sidney Crosby. But Sheary represents more than that.

Sheary was never a big time scorer as he came up. He spent three years at UMass, never amassing (see what I did there?) more than 12 goals in an NCAA season. After that he spent one full season in the AHL, scoring 20 goals in 58 games with Wilkes-Barre. The motivation to play well there is huge of course, because no one wants to spend one more minute in Wilkes-Barre than they have to. The following season saw Sheary bounce between the AHL and NHL team, with 14 goals in 74 games between the two.

Last year, Sheary was up full-time, and on Sidney Crosby’s wing full-time. The result was 23 goals in just 61 games. His 21 ES goals was in the top-20 in the league. The pace hasn’t dropped this year, with eight goals in 20 games.

All of it makes that theory of a few years ago that “Not everyone can play with Sid” seem downright laughable now. That theory got Chris Kunitz an Olympic spot and gold medal, and Chris Kunitz is basically a dude. The theory basically stemmed from Dan Bylsma just forcing Pascal Dupuis onto Sid’s line for years, and Pascal Dupuis was borderline The Suck. Patric Hornqvist spent one year as a winger for Sid, and he had the best goals-per-game rate of his career. Sheary comes up at 23 and is a 20+ goal scorer. It’s just that simple.

Sheary is also an example of how you remain a contender with high-priced starts being paid like it, and one the Hawks might be too late to get to. Sheary, Wilson, Rust, and Maatta and Kuhnackl on the blue line all came up and provided the floor for the Penguins roster for their two Cups. And none of them are expensive. Of course, Sheary got paid after last year and is now $3 million player. But that’s how it has to be done when you’re paying Fleury, Letang, Crosby and Malkin.

Meanwhile on the other side of the coin, the Hawks have traded all their young, cheap talent for a couple years and are trying to get on the right side with Schmaltz, ADB, Hartman. It might be too late.

The reckoning might not be coming for the Penguins like you would guess. Patric Hornqvist comes off the books after the season when Rust and Kunahckl need new paper, but neither are going to break the bank. They’ll lose Ian Cole’s contract of $2 million as well. Two years from now Carl  Hagelin’s $4 million comes off the books, with only Jake Guenztel coming up for a new deal. They could do this for a few years more yet if they maintain health.

It seems pretty simple, no? Wish more could do it.