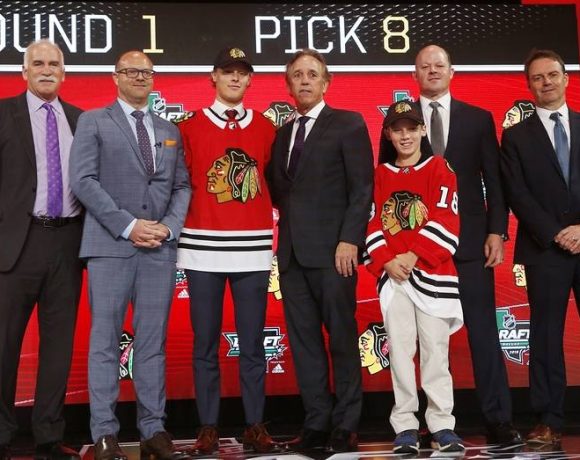 Sorry, A Few Good Men was on when I got home last night.

To preserve any kind of sanity about the state of the Hawks, I work under the theory that behind closed doors, Stan Bowman told John McDonough and Rocky Wirtz that basically this season was going to be a toss, but they wouldn’t tell the fans that because they’re terrified no one would understand (even though I’m fairly sure they would?), but he would take the bullets about it all. I take him at his word that the team’s future is resting basically upon Adam Boqvist, Henri Jokiharju, and some combination of Ian Mitchell and Nicolas Beaudin. That, and some big free agent signing, which they’re trying real hard to make you believe is Artemi Panarin and I still remain unconvinced that’s a great idea. But unless he goes entirely late-career Patrick Sharp and does more floating than a drunk yuppie in the Chicago River on St. Patrick’s Day, it won’t end up that badly.

There’s one problem with that theory. Stan Bowman may not have any idea how to scout, develop, or identify a defenseman.

Here’s a list of d-men that Stan Bowman has drafted that have had more than a cameo in the NHL: Stephen Johns, Klas Dahlbeck, Adam Clendening, Henri Jokiharju. That’s in nine years.

How many times did you throw up? Eleventy-billion?

Now, let’s throw one note of a qualifier in there. For most of the years Stan has been here, the top four was set. So they really only had to find third-pairing players. Ok, now that’s out of the way…

So in nine drafts, Bowman found all of four d-men that could play at the NHL at all, and only one has any hope of being more than a third-pairing guy, and I’m giving Jokiharju some credit there. And he’s the only one to make any kind of impact on the Hawks.

Add those four, and the 33 that Bowman has signed or acquired in some way. So that’s 37. How many rise above just third-pairing status? Oduya the first time is clearly the pick of the bunch. Nick Leddy didn’t here but is a second-pairing player for sure, so we’ll give him that. Michal Kempny clearly is, but he couldn’t get his coach to agree. Connor Murphy probably, but now he has a back made out of rubber cement. So that’s four. Five out of 37. 13% of the d-men he’s tried have been something more than scenery, and only two here in Chicago where the Hawks could benefit. Two and a half as Leddy was pretty damn good in ’13 and ’14.

It’s like saying the Cubs will eventually develop starting pitching. We have more than 10 years of evidence in two organizations that Theo Epstein can’t really develop a starter. Maybe it’s just not going to happen.

So every time Stan stands in front of the media and tries to sell you on Boqvist, Beaudin, and Mitchell being some kind of savior(s), I would raise an eyebrow or six. Because the track record just isn’t there.